Adam Purinton would not be eligible for parole until after he turns 100. 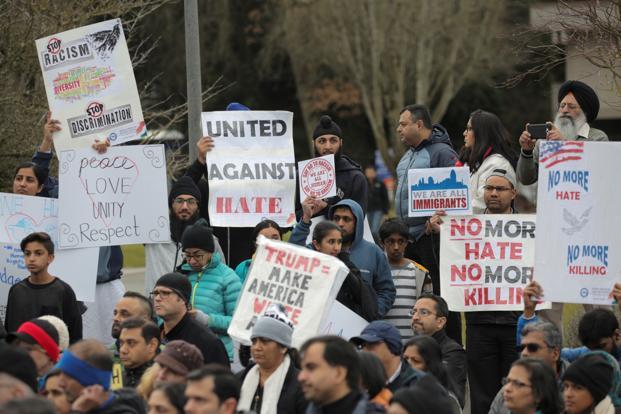 People listen during a vigil in honour of Srinivas Kuchibhotla, an Indian immigrant who was recently shot and killed in Kansas, at Crossroads Park in Bellevue, Washington. Credit: Reuters

Washington: A US Navy veteran today was sentenced to life imprisonment for killing Indian engineer Srinivas Kuchibhotla in a racially motivated hate crime at a bar in Kansas City last year.

A federal judge in Kansas sentenced Adam Purinton, 52, to nearly 78 years in prison as part of a plea agreement reached in March. Purinton would not be eligible for parole until after he turns 100, KSHB reported.

The US Attorney’s Office in Kansas had filed hate crime charges against Purinton last June. Purinton had yelled, “Get out of my country,” before shooting Kuchibhotla, who later died from injuries sustained in the attack.

He pleaded guilty to the charges of murdering Kuchibhotla, in March this year.

He was charged with first-degree murder of Kuchibhotla (32) and two counts of attempted first-degree murder in the shootings of his friend, Alok Madasani, and a bystander, who chased Purinton after he fled the Austin’s Bar and Grill in Olathe city on February 22 last year.

In addition to the state charges, Purinton faces prosecution in federal court.

Kuchibhotla is survived by wife Sunayana Dumala, who welcomed the court’s decision. “Today’s sentencing in the murder of my husband will not bring back my Srinu, but it sends a strong message that hate is never acceptable,” Dumala said in a statement.

“I want to thank the District Attorney’s office and the Olathe police for their efforts to bring this man to justice,” she added.

Kuchibhotla hailed from Hyderabad. He had a master’s degree in electrical and electronics engineering from the University of Texas at El Paso. He earned his bachelor’s degree from the Jawaharlal Nehru Technological University in Hyderabad.