An Epic Story Never Seen Before Is Unfolding in the US

The diversity of the protests is similar to the anti-Citizenship Amendment Act marches in India. 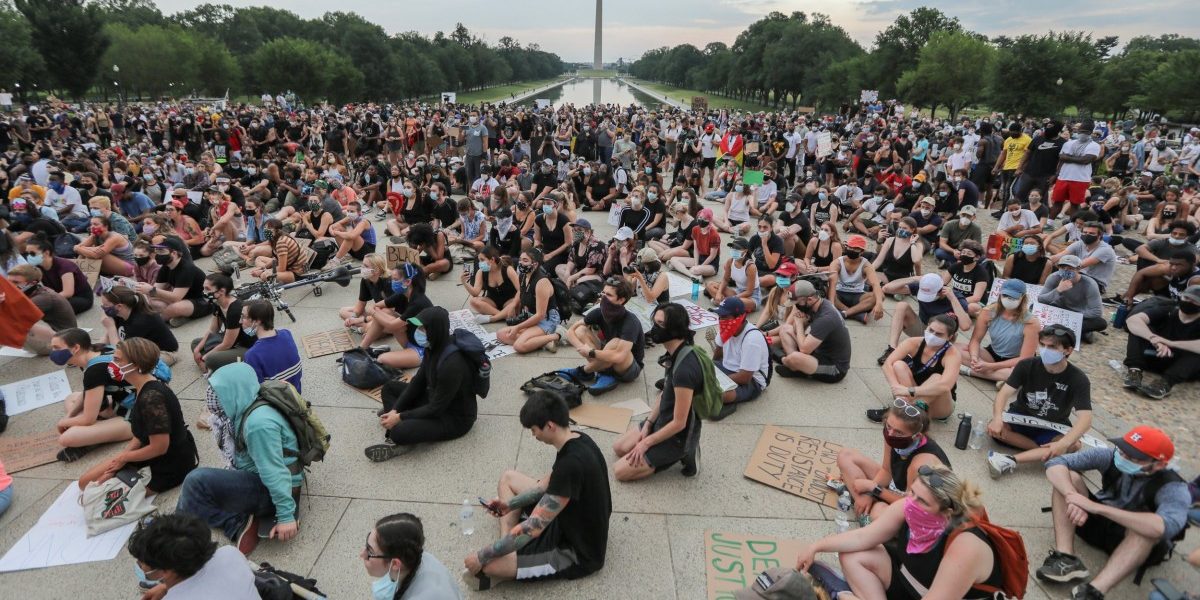 Demonstrators sit as they gather during a protest against the death in police custody of George Floyd, at the Lincoln Memorial in Washington, US, June 4, 2020. Photo: Reuters/Carlos Barria/Files

Among the numerous similarities between the current Indian and American scenes is the peculiar position of their capital territories. If Delhi is not a full-fledged state, Washington DC does not even have a place in the Senate, while its solitary delegate in the House of Representatives has no voting right.

Outraged that DC’s population is demonstrating, like those in almost every US city, for racial equality, and is doing so within his sight and earshot, President Donald Trump has tried to extend, block by block, barricade by barricade, the White House’s de facto boundaries.

Because we are in the year 2020, Trump’s annoyed exertions are being watched by the whole world. The disastrous photo-op before the church next to the White House, and Trump’s descent for safety into the White House’s bunker, will be remembered for long.

After cheerfully going along with a cascade of Trump falsehoods (each of them contradicted by a Trump video), even the most loyal in his faithful base will have trouble believing Trump’s story that he was only inspecting the bunker.

But Trump’s discomfiture and decline, and possible fall in November, is not today’s main story in the US. That story has been upstaged by the size, ubiquity, youthfulness and ethnic diversity of the protests for equality.

No one in the US seems able to recall anything like this happening ever before. It is a story of epic proportions.

Of the protests’ four features mentioned by me, politically the most significant may be the last two. Young Americans of all races have been streaming out, risking much, including the possibility of picking up the COVID-19 virus.

Evidently taken by a 17-year-old young woman called Darnella Frazier, a nine-minute video of the Minneapolis murder of George Floyd, an unarmed black man, is, as everyone knows, what triggered this mostly peaceful upheaval in US cities, with echoes worldwide.

Looting and some acts of violence against persons also occurred, but without the approval of the vast majority of the protesters, whose pent-up feelings of anger at perpetual injustice towards their nation’s vulnerable blacks became uncontainable when the video was seen, but who were determined to remain peaceful while firmly insisting on justice.

Investigations may eventually reveal the faces, backgrounds and motives of those who were behind the incidents of violence. There is no indication that these mischief-makers wanted equality or justice. Did some intend to create an excuse for suppressing disorder with a stern hand?

If so, they seem to have failed miserably. 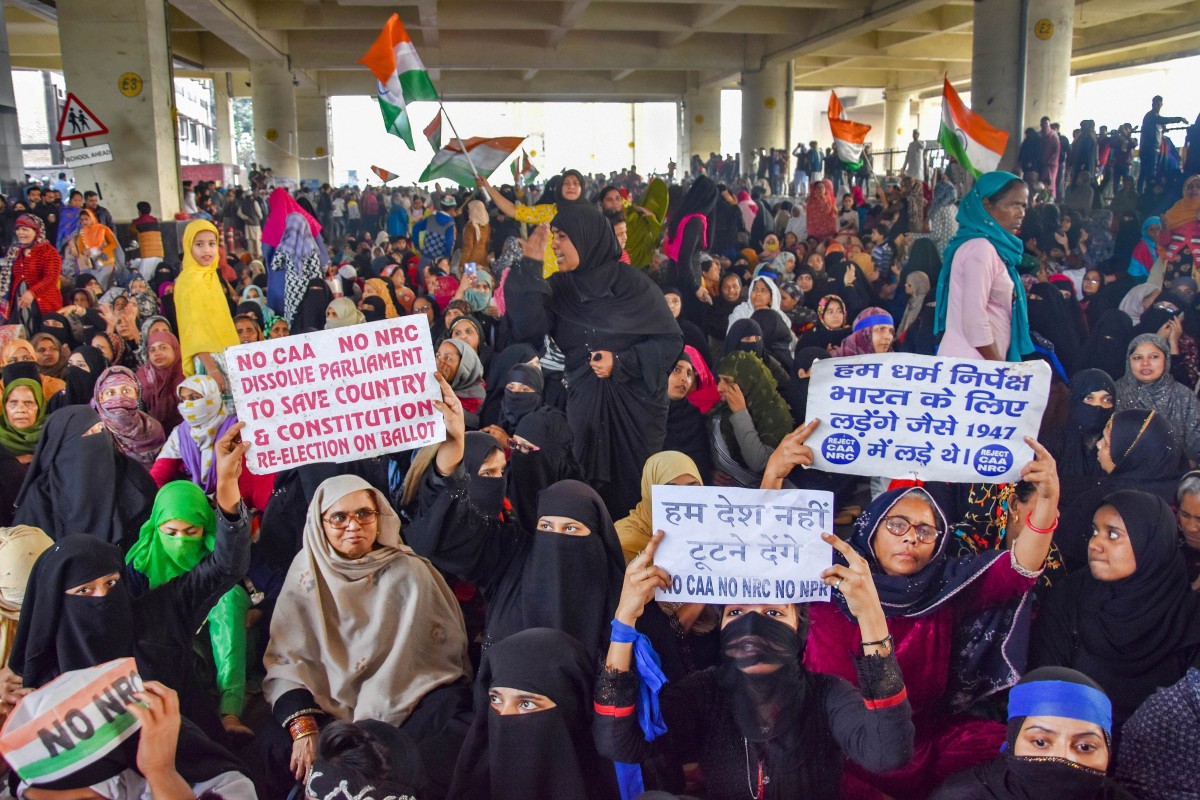 Protest against the CAA, NRC and NPR at Delhi’s Jaffrabad. Photo: PTI/Files

Trump did declare that he was “a law and order president” and even threatened to send federal US troops to curb “lawlessness” in cities and states controlled by Democrats. As if to underline that threat, Trump had General Mark Milley, current chairman of the joint chiefs of staff, accompany him on that disreputable walk to the damaged church near the White House.

But there has been a big blowback. James Mattis, a former chief of the marines who for two years was Trump’s defence secretary, strongly criticised Trump as a divider of the country when unity was the greatest need. Other former chiefs of the US military also objected to the idea of militarising the administration’s response. Mark Esper, the current defence secretary (who too had “walked to the church”) tried to walk back, saying that conditions for the US military to intervene simply did not exist.

Trump was forced to eat his words – on a day when polls suggested that he was running behind Joe Biden in crucial toss-up states.

To return to the protests. These remind me of what I had witnessed in India in the final months of 2019 and the start of 2020: the anti-Citizenship Amendment Act protests when in city after city young Hindus, Sikhs and Christians joined Muslims in protesting the exclusion of Muslims from the benefits of a new law.

Also read: Justice Before Order: What the Outpouring Rage After George Floyd’s Death Tells Us

Other political similarities or links can be easily thought of. For example, Indians may reflect that today’s nonviolent protests on US streets are in some ways also connected to long-ago struggles in India. They may recall that Martin Luther King Jr and his colleagues used to speak of what they had taken from campaigns that Gandhi conducted in India.

Fortunately, Indian voices may at times be heard today among the calls for equality on US streets. But other Indians in the US, true, had vociferously welcomed Trump in Houston.

Be that as it may. The central similarity is this: What Dalits and Muslims confront day after day in India is hardly different from what stares ceaselessly at the US’s blacks. India’s neglected and oft-persecuted minorities may therefore draw encouragement from what seems to be happening today in the US.

There are contrasts of course. If US streets are filled right now by hope-filled, justice-demanding young men and women of all races, India’s streets still seem to draw fear-filled and oft-hungry migrants.

Compared with counterparts in India, US universities, courts, newspapers and TV channels are much bolder in demanding or upholding rights to equality and free speech.

Moreover, there is no guarantee that today’s American trends will continue tomorrow.

It is a fact, all the same, that the cruel killing of an unarmed black man in Minneapolis has finally triggered an extraordinary sequence of events in the US, a sequence suggesting that equality and governance matter, and that the politics of polarisation may carry an expiry date. We can only hope that the sequence will not remain confined to the US.

Rajmohan Gandhi teaches at the University of Illinois at Urbana-Champaign.