US, EU Expel Over 100 Russian Diplomats Over UK Spy Attack

This is the strongest action that US President Donald Trump has taken against Russia since coming to office. 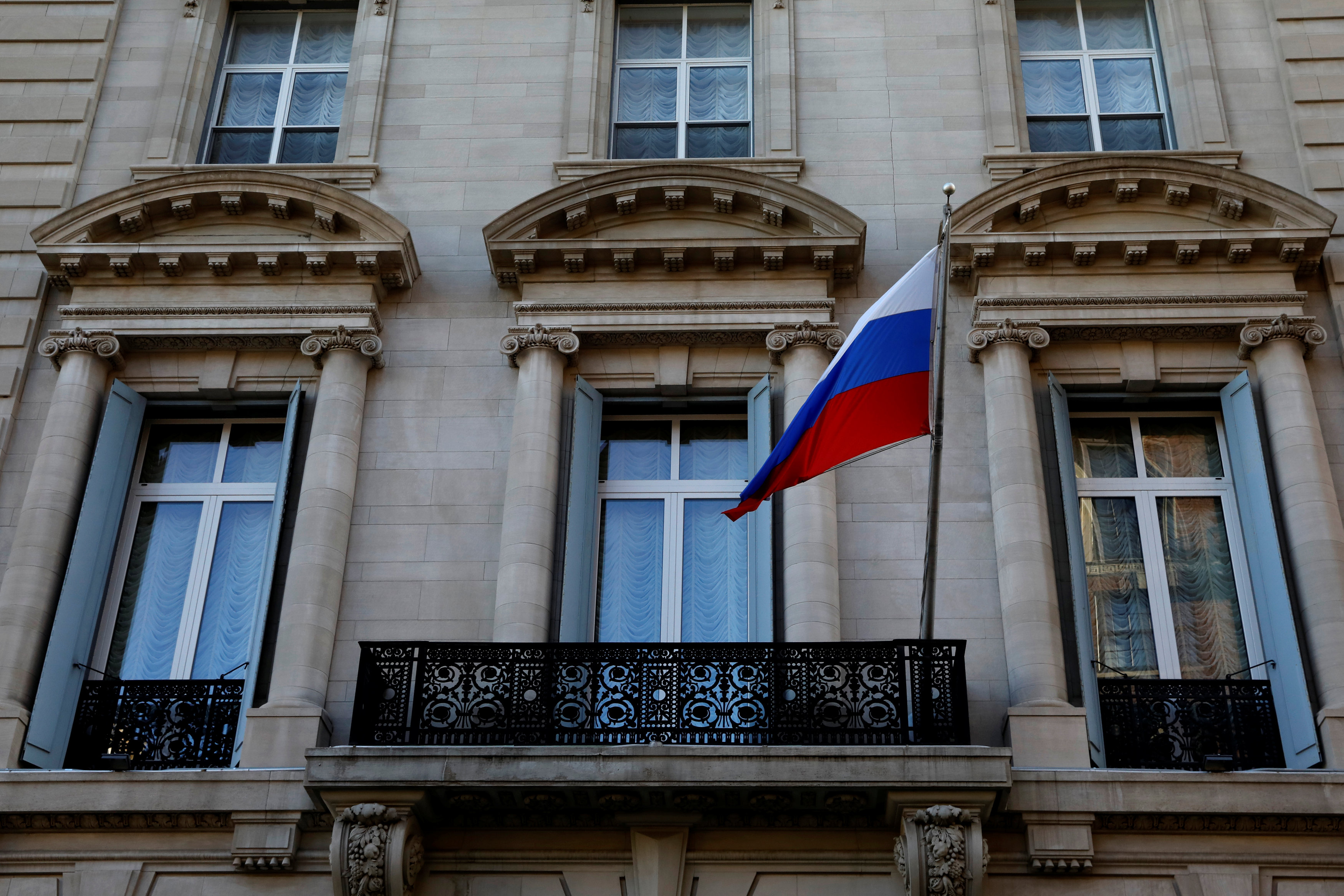 The Russian flag flies on the Consulate-General of the Russian Federation in Manhattan in New York City, March 26, 2018. Credit: Reuters/Mike Segar

London/Washington: The US said on Monday it would expel 60 Russian diplomats, joining governments across Europe in punishing the Kremlin for a nerve agent attack on a former Russian spy in Britain that they have blamed on Moscow.

It was the strongest action that US President Donald Trump had taken against Russia since coming to office. He has been criticised by Democrats and members of his own Republican Party for failing to be tough enough on Russia over US allegations of Russian meddling in the US electoral system, including the 2016 presidential campaign.

British Prime Minister Theresa May, welcoming the show of solidarity, said 18 countries had announced plans to expel Russian officials. Those included 14 European Union countries. In total,100 Russian diplomats were being removed, the biggest Western expulsion of Russian diplomats since the height of the Cold War.

Australia later confirmed it was expelling two Russian diplomats identified as undeclared intelligence officers, citing Russia’s “reckless and deliberate conduct”. New Zealand said it had no such agents operating on its shores but would expel them if it did.

British Foreign Secretary Boris Johnson said on Twitter Monday’s “extraordinary international response by our allies stands in history as the largest collective expulsion of Russian intelligence officers ever and will help defend our shared security”.

May said the coordinated measures sent the “strongest signal to Russia that it cannot continue to flout international law”.

Britain had evidence Russia has investigated ways of distributing nerve agents for assassinations, May told parliament.

Russia’s foreign ministry called the expulsions a “provocative gesture”. A Kremlin spokesman said the West was making a “mistake” and that President Vladimir Putin would make a final decision about Russia’s response.

Moscow has denied being behind the attack on Sergei Skripal and his daughter in the southern English city of Salisbury. Skripal, 66, and Yulia Skripal, 33, were found unconscious on a public bench in a shopping centre on March 4 and remain critically ill in hospital.

“We assess that more than 130 people in Salisbury could have been potentially exposed to this nerve agent,” May said.

Monday’s wave of expulsions followed EU leaders saying last week that evidence presented by May of Russian involvement in the attack was a solid basis for further action.

The staff expelled by Washington includes 12 people identified by the US as intelligence officers from Russia’s mission to the UNs headquarters in New York. They were involved in activities outside their official capacity and an abuse of their privileges of residence, US Ambassador Nikki Haley said.

Trump also ordered the closure of the Russian consulate in Seattle because of its proximity to a US submarine base and planemaker and defence contractor Boeing Co, a senior US official said. Seattle was a hub of Russian cyber espionage, both political and commercial, according to two US intelligence officials.

The administration officials said “well over 100 intelligence officers” operated in the US, and Washington’s action cuts 60 of them.

One week to leave

The envoys and their families have been given a week to leave the US, according to one US official. Australia has issued the same deadline to its expelled diplomats.

Trump, who before he took office in January last year promised warmer ties with Putin, last week congratulated the Russian leader on his re-election, drawing criticism from Republicans and Democrats alike. Trump said the two leaders had made tentative plans to meet in the “not too distant future”.

He did not bring up the poisoning attack in his phone call with Putin.

Trump himself was silent on Monday on Twitter, where he often comments about his policy decisions. However, the White House said later it would like to have a “cooperative relationship” with Russia.

“The president wants to work with the Russians but their actions sometimes don’t allow that to happen,” White House spokesman Raj Shah told a news briefing. “The poisoning in the UK that has kind of led to today’s announcement was a very brazen action. It was a reckless action.”

Washington had already imposed sanctions on Russian citizens and firms for US election meddling and cyber attacks but put off targeting oligarchs and government officials close to Putin.

“Punishing diplomats is not a direct threat to Putin’s power or money. Further, our previous efforts to kick out diplomats has done little to change Kremlin behaviour,” said former CIA officer John Sipher, who served in Moscow and ran the agency’s Russia operations.

US officials said the scale of the expulsions was based not only on the expansion of Russian espionage in the US, but also on its increasing focus on critical infrastructure targets such as electrical grids, financial networks, transportation and healthcare.

Trump has been criticised in the US for doing too little to punish Russia for the election meddling and other actions. US Special Counsel Robert Mueller is looking into whether Trump’s campaign colluded with the Russians, which he denies. Moscow also denies interference in the campaign.

Skripal’s poisoning, which Britain said employed the Soviet-era military-grade nerve agent Novichok, is the first known offensive use of a nerve toxin in Europe since the Second World War.

The foreign ministry said “powerful forces” in the United States and Britain were behind the attack, RIA Novosti agency reported.

European Council President Donald Tusk said further measures could be taken in the coming weeks and months. Russia said it would respond in kind.

“The response will be symmetrical. We will work on it in the coming days and will respond to every country in turn,” the RIA news agency cited an unidentified foreign ministry source as saying.

The Kremlin has accused Britain of whipping up an anti-Russia campaign and has sought to cast doubt on the British analysis that Moscow was responsible. Russia has already ordered 23 Britishdiplomats out of the country after Britain expelled 23 Russian diplomats.