In a sign of progress of foreign force withdrawal, the Taliban agreed on the sidelines of the peace talks to hold separate discussions with a group of Afghan delegates. 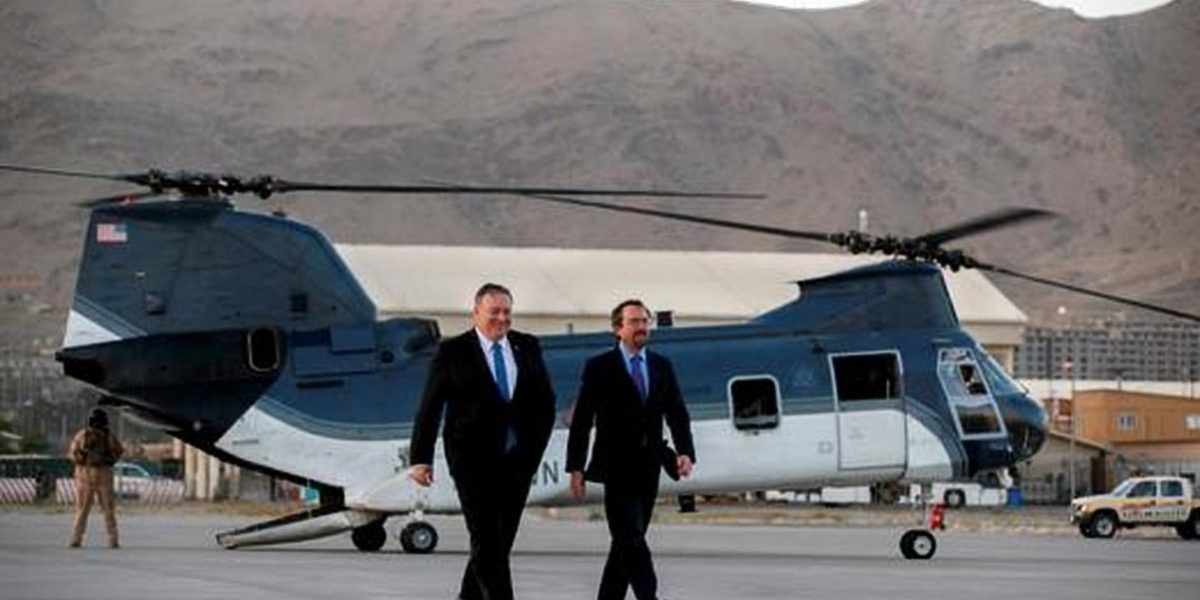 Secretary of State Mike Pompeo walks from a helicopter with US Ambassador to Afghanistan John Bass. Photo: Reuters

Kabul: US and Taliban officials will reconvene on Tuesday to continue peace talks described as the “most productive session” by a top US negotiator leading the discussions with the hardline Islamists group to end the Afghan war.

The warring sides started the seventh round of peace talks last week, aiming to hammer out a schedule for the withdrawal of foreign troops in exchange for Taliban guarantees that international militant groups will not use Afghanistan as a base for launching attacks.

In a tweet on Saturday, US envoy Zalmay Khalilzad, who has been holding peace talks with the Taliban to end the eighteen-year war in Afghanistan since last year, said the latest round of discussions was the “most productive session” to date.

We’re pausing talks today to support intra-Afghan dialogue (an intra-Afghan conference for peace), a critical milestone in the #AfghanPeaceProcess. There is still important work left to be done before we have an agreement. We will resume on the 9th after the dialogue.

About 20,000 foreign troops, most of them American, are in Afghanistan as part of a US-led NATO mission to train, assist and advise Afghan forces. Some US forces carry out counter-terrorism operations.

On a trip to Kabul last month, US secretary of state Mike Pompeo said the US was close to finishing a draft agreement with the militants on counter-terrorism assurances, adding he hoped a peace pact could be reached by Sept. 1.

Khalilzad, an Afghan-born American diplomat, wants to secure a political settlement with the Taliban, which now controls more Afghan territory than at any time since being toppled in 2001 by US-led Forces.

Clarity on a final agreement on the timetable of foreign force withdrawal has been elusive so far, but in a sign of progress, the Taliban agreed on the sidelines of the peace talks to hold separate discussions with a group of Afghan delegates.

Both sides decided on Saturday to put the peace talks on hold for two days, to allow for a meeting between rival Afghan groups to be held in Qatar, Taliban and US officials said.

US officials are demanding a ceasefire agreement, and a commitment to direct talks between the Taliban and the Afghan government before a peace deal is finalised.

Sohail Shaheen, a spokesman for the Taliban’s political office in Qatar’s capital, Doha, said the ‪US-Taliban dialogue would resume after the two-day intra-Afghan conference.

A previously planned meeting between Afghan representatives in April collapsed before it started amid disagreement over the size of the proposed 250-strong Afghan delegation as well as over its status as a representative body.

This time, about 40 high-profile Afghan figures and activists will fly to Doha but will not have any official status — a condition made necessary by the Taliban’s refusal to deal directly with the Western-backed government in Kabul.

The Taliban have stressed that those attending the talks planned for Sunday and Monday will only do so in a “personal capacity.”

Also read: Afghan Working Women Targets of Violence for Working Outside the Home

A senior Taliban official, speaking on condition of anonymity, said ensuring the protection of the rights of women and minorities would be discussed in the Doha talks, which have been facilitated by German and Qatari officials.

Despite intensified diplomatic efforts to end the 18-year long war in Afghanistan, deadly violence has surged across the country.

Last week, the Taliban claimed a truck bomb attack in Kabul that killed six people and wounded 105 civilians, many of them children.