By Cutting Aid to Palestinian Refugees, US Is Fuelling Uncertainty in the Middle East

In collusion with Israel, the Trump administration is pursuing a two-track policy: emasculating UNRWA of funds and calling for a redefinition of the term “refugee”. 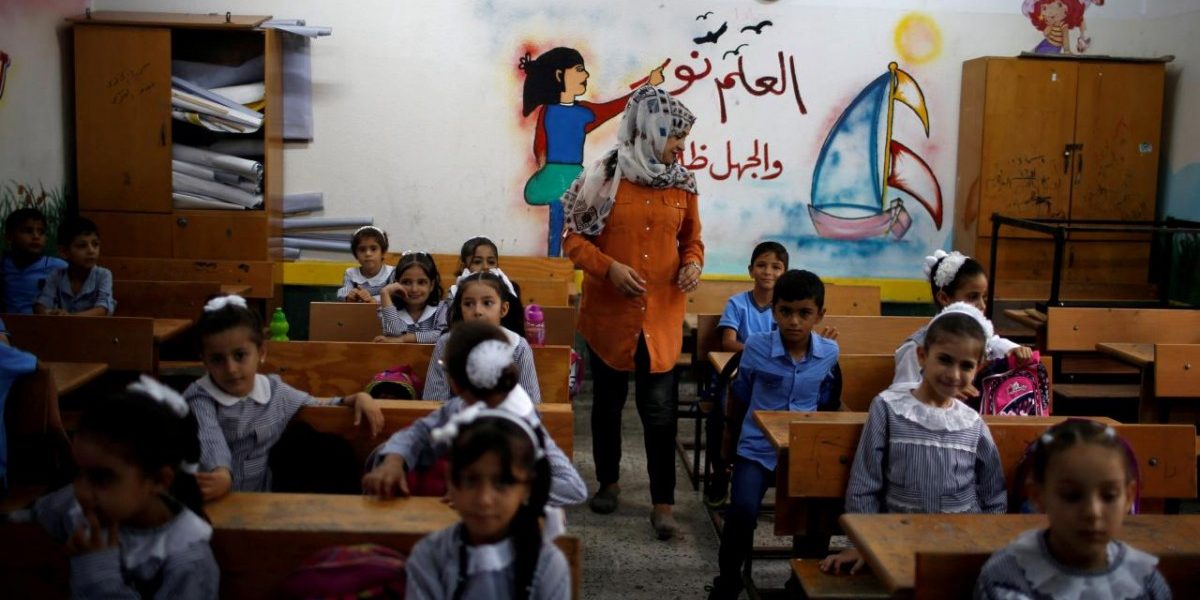 London: With a curt declaration, the United States struck a blow at a nearly seven-decades old UN project to provide humanitarian aid to the millions of Palestinian refugees and aligned itself further with Israel. The move threatens to produce serious social-political consequences and inflame Palestinian militancy.

The US State Department capped its August 31 decision to discontinue its financial contribution to the UN Relief and Work Agency for Palestinian Refugees in the Near East (UNRWA), declaring that the 69-year-old organisation’s work is an “irredeemably flawed operation.” In its robust riposte, the office of UN Secretary-General António Guterres applauded UNRWA’s “high quality education, health and other essential services, often in extremely difficult circumstances.”

In the words of Pierre Krähenbühl, the UNRWA’s commissioner general, Washington’s move was “an evident politicisation of humanitarian aid.” Quite so. At the root of this US-induced crisis lies the unannounced strategic decision of the Donald Trump administration to remove all permanent status issues between Israel and Palestinians, to be settled bilaterally according to the 1993 and 1998 Oslo Accords – including the Palestinian refugees’ right of return and the mutually agreed status of Jerusalem – from the negotiating table.

The UN General Assembly condemned Donald Trump’s December 6 decision to recognise Jerusalem as Israel’s capital by 128 votes to nine in a rare emergency session. Stung by this humiliating blow from the international community, his administration cut a scheduled UNRWA payment of $130 million by half and demanded unspecified reforms. During the subsequent months, the United States failed to notify UNRWA of the specific reasons for the dramatic cut.

UNRWA is charged with providing education, medical care and emergency assistance to more than 5 million Palestinian refugees in the Occupied Palestinian Territories, Jordan, Lebanon and Syria. Its monthly budget is $90 million, with about a third coming from the United States since 1974. After January of this year, UNRWA scrambled for increased financial assistance from other donors to continue operating. It managed to secure $150 million from Qatar, the United Arab Emirates and Saudi Arabia. A further $88 million came from Canada, Norway and Turkey. Those cash injections are on the verge of exhaustion.

The precipitate cancellation of US funding has left a shortfall of $217 million, according to UNRWA spokesman Christopher Gunness. He warned that “After September we won’t have enough money to run our schools, health clinics and our relief and social services programs.” Of its 30,000 employees, 22,000 are teachers.

The scale of the agency’s operations can be judged by the fact that 252 UNRWA schools serve 240,400 students in the Gaza Strip. Of the Strip’s 1.8 million inhabitants, 70 percent are registered as refugees. Given the self-governing territory’s 30% unemployment rate, more than one million people survive on food aid from UNRWA. Unsurprisingly, crowds stormed a UNRWA compound in Gaza to protest the US cuts.

Sami Abu Zuhri, a senior official of Hamas, which administers the Gaza Strip, tweeted: “The US decision to cancel aid to UNRWA aims to remove the right of return and represents a serious American escalation against the Palestinian people.” On the West Bank, where a third of its 2.4 million inhabitants are registered as refugees, Palestinian Prime Minister Rami Hamdallah described the US move as “its latest blatant aggression against the rights of the Palestinian people, international law and UN General Assembly Resolution 302 of 1949, which specified that the UN agency was established to provide its services in all areas until the refugee issue is resolved.”

Subsequent to that resolution, the UN secretary-general established UNRWA at UN offices in Vienna. That meant having to deal with 914,221 Palestinians of whom some 500 000 qualified for UNRWA relief. Israel’s seizure of the West Bank, East Jerusalem and the Gaza Strip during the June 1967 Arab-Israeli War created another 335,000 displaced Palestinians, of whom 193,600 were eligible for the agency’s support.

As expected, Israel’s Prime Minister Benjamin Netanyahu praised the US decision to cut aid to the humanitarian organisation. He claimed that UNRWA was formed “not to absorb the refugees but to perpetuate them.” In the past he has argued that the agency should be abolished and its functions transferred to the UN High Commissioner for Refugees (UNHCR). It is worth noting that the UNHCR, founded in December 1950, came into existence one year after UNRWA. 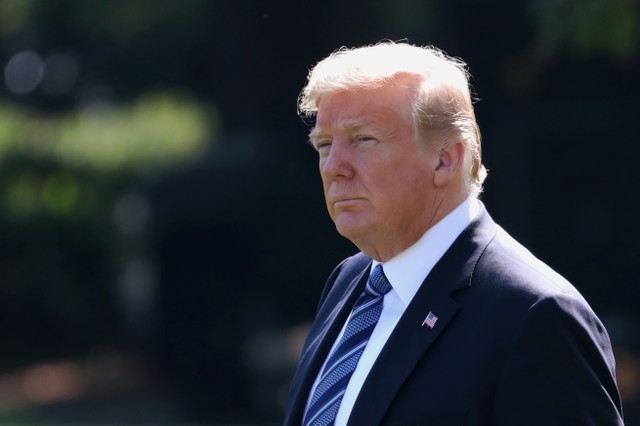 US President Donald Trump walks to Marine One while departing the White House in Washington, U.S., September 6, 2018. Credits: Reuters/Chris Wattie

In collusion with Israel, the Trump administration is pursuing a two-track policy: emasculating UNRWA of funds and calling for a redefinition of the term “refugee.” David Friedman, the US ambassador to Israel, refers to “so-called refugees” from other countries, “who have never spent a day of their lives in Israel.” However, there is no prospect of the United Nations altering its 69-year practice of treating the descendants of the original Palestinian refugees as refugees.

The consequences of weakening or abolishing UNRWA would be dire, most specialists on the Middle East have warned. Adnan Abu Hasna, the UNRWA spokesman in Gaza, said that if the agency’s network in the territory collapsed, all those school students would be in the streets: “There would be more negative energy – that’s a security danger not only for Gaza… but also for Israel. It’s a gift to terror.”

Outside of the Occupied Palestinian Territories, the country most affected by the collapse of UNRWA would be Jordan. Of its 9.5 million inhabitants, 2.1 million are Palestinian refugees.  Little wonder that its government has sponsored an emergency fundraising conference on the sidelines of the UN General Assembly due to open in New York on 18 September. Meanwhile, King Abdullah II of Jordan summarily rejected the Trump administration’s call to take over UNRWA’s Jordanian educational network. Jordan’s fear of regional destabilisation caused by a debilitated or abolished UNRWA – likely to lead to the strengthening of such militant organisations as Hamas – is shared by the Arab Gulf monarchies and the European Union.

Noting that UNRWA’s funding crisis is fuelling uncertainty, Germany’s foreign minister Heiko Maas addressed a letter to other EU foreign ministers, stating that Germany was ready to raise its agency contribution from the present sum of $94 million this year. In recent years, the European Union has been the second-largest contributor to UNRWA, accounting for $142 million in 2017. Expressing regret about the US decision, the EU said, “It is committed to secure the continuation and sustainability of the agency’s work which is vital for stability and security in the region.” From that perspective, contributions by EU member-states could be seen as part of their national security budget.

While the current financial crisis can be defused, the Trump administration is preparing to raise diplomatic barriers. According to Israel’s Channel-2 TV report, citing senior Israeli sources, the United States will not prevent the Gulf States, Arab nations and others from providing emergency funding to keep UNRWA running this year. Afterward, the United States will consent to further funding by Washington’s Arab allies only on a reevaluation of UNRWA’s role and a redefinition of whom the agency defines as a Palestinian refugee.

If so, it remains to be seen which Arab state will fall in line with Trump’s diktat, which expects aid to be offered only to those Palestinians displaced in 1948-1949 and 1967, but not to their descendants, thereby reducing the total by 90%. That would mean unilaterally usurping a right that rests exclusively and legally with the United Nations.

This article was originally published on YaleGlobal Online. Read the original article.