The US Is Shifting Focus to 'Domestic Terrorism'. Here's What That Means for Global Politics.

The elevation of domestic terrorism as the biggest internal security threat by the US signals the beginning of the post-‘war on terror’ phase of global politics. 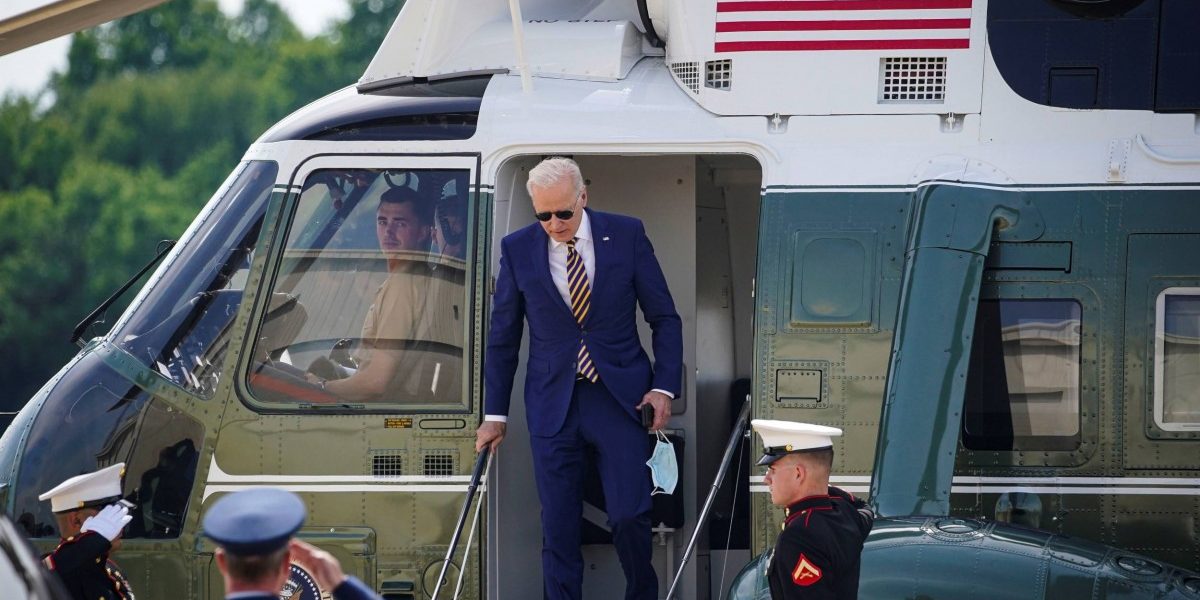 US President Joe Biden arrives on Marine One for a weekend trip to his home in Wilmington at Delaware Air National Guard Base in New Castle, Delaware, US, June 18, 2021. Photo: Reuters/Al Drago

Recently, US President Joe Biden’s administration unveiled a National Strategy to Counter Domestic Terrorism (NSCDT). The Biden administration is of the view that “domestic terrorism” has evolved into the most urgent terrorism threat faced by the US.

The NSCDT has come in the backdrop of the announcement of complete US troop withdrawal from Afghanistan by September 11, 2021, two decades after the 9/11 attacks. This is a significant development because since the 9/11 attacks, most of the American, and indeed global, political landscape has come to be dominated by the issue of combatting terrorism. In such a context, this reframing of the discourse of terror has major political and ideological implications which reflect the shifting contours of global politics.

The politics of terrorism

Terrorism is a political act because unlike other violent crimes, acts of terror, are triggered by ideological convictions based upon which the terrorists intend to re-shape society. Therefore, deciding what constitutes terrorism is one of the most important political decisions that modern nation-states make. Defining terrorism is the act of delimiting the political community. In other words, it is an act of delegitimising and excluding certain kinds of political claims from the polity.

More importantly, defining what constitutes terrorism is the sole prerogative of the state as no individual or organisation ever willingly accepts this label. States have used this privilege as a tool to frame the political discourse in terms of a choice between rights and security, thereby, enhancing their own power at the cost of their citizens. Furthermore, states have used the fear induced by acts of terror to stifle public reason in order to manufacture consent to pursue their goals at home and abroad. Domestically these acts have included suspending liberties, targeting dissidents, stigmatising minorities and entrenching authoritarianism, while in the arena of foreign policy this has entailed imposing economic sanctions and waging wars.

Also read: QAnon Followers in the US May Become More Violent, FBI Warns

Terror and the clash of civilisations

In the aftermath of the collapse of the Soviet Union, Huntington in his (in)famous thesis, anticipated that in this phase of history, ideological and economic conflicts would be replaced by a clash of civilisations. This era would be characterised by the conflict between the west and the rest, and the direction of global politics would be defined by the alliances and conflicts among a handful of major civilisations. In this framework, culture was the primary determinant of politics as opposed to economic interests. The question, “Which side are you on?” was replaced by, “What are you?”; ideas replaced by identity. This essentialised and cultural restatement of international politics was in line with the neoliberal intellectual project which aimed to explain the world primarily through the lens of identity rather than class.

The neoconservative Bush administration used this frame as an ideological justification for its invasion of Afghanistan and Iraq following the 9/11 attacks. Bush described the “War on Terror” as the ‘struggle for civilisation’. In his articulation, terror became the other of civilisation; whereas, civilisation came to be defined through American values or precepts of liberal democracy. The ‘war on terror’ established “Islam” as an illiberal opponent of the ideas of liberty, democracy and decency in popular consciousness. This civilisational definition of terror was milked by majoritarian political projects across the world to marginalise Muslims within their countries and vice-versa.

However, the world changed after the global financial crisis. Trump inherited an aggressive China, a sluggish economy and an unequal society. His entire political platform was based on ending the expansive neoconservative ambitions of the US in the world and focusing at home. However, he fed off and exacerbated the existing stigma around Islam and indulged in open Muslim-baiting to consolidate his predominantly white-conservative base.

More importantly, his presidency saw unprecedented racial polarisation, white nationalist mobilisation and mass shootings by avowed white supremacists. Such instances were not unprecedented; however, Trump bestowed them with legitimacy by his acts of omission and equivocation. These sporadic incidents all culminated in the attack on the Capitol Hill following the speech by Trump encouraging his supporters to march in protest. The clash within civilisation could no longer be concealed.

Also read: ‘Vaccine Nationalism Is a Norm Under Capitalism, the World Needs Internationalism’

According to the Strategic Intelligence Assessment and Data on Domestic Terrorism data, since 2015, there have been 85 acts of domestic terrorism of varying intensity in the US. Since 9/11, 107 Americans have lost their lives due to Islamist fundamentalist terror while domestic terrorism has accounted for 114 deaths in the same period. It is within this context, that the Biden administration has turned the gaze back inwards and declared domestic terrorism as the most pressing threat to US internal security.

In a way, it is a continuation of the isolationism initiated by the Trump administration. However, locating the root of domestic terrorism within the ideology of racial supremacy and acknowledging the urgent need to disrupt the dehumanisation of and violence against ethnic and religious minorities – including Muslims – is a fundamental shift from the earlier the civilisational paradigm to define terrorism. Thus, NSCDT can be seen as a pivot back to ideology from identity with regard to defining terrorism.

The elevation of domestic terrorism as the biggest internal security threat by the US signals the beginning of the post-‘war on terror’ phase of global politics. The US has once again shifted the anchors of the discourse of terrorism from civilisational identity to political ideology. It is a tacit acceptance that the liberal order is under attack not only from religious fundamentalism outside but from ethnic majoritarianism within the polity as well. This has important implications for the rest of the world, and especially, majoritarian projects across the world which have fed off this discourse, as now they cannot pin terrorism to only one civilisation and might be forced to look within. Just like Biden’s America…