US Democratic Party Seeks Unity, to Give Sanders Say in Party Platform

The US senator from Vermont will be allowed to name five members to the 15-member committee that writes the platform at the Democratic National Convention in late July in Philadelphia even if he is not the party's presidential nominee. 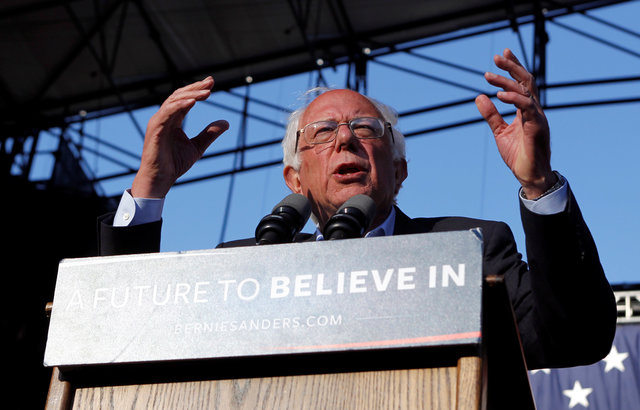 New York: The Democratic Party said on Monday it would give US presidential contender Bernie Sanders a prominent say in writing its platform this year, a gesture that could ease tensions between Sanders‘ camp and party leaders, whom Sanders has accused of favouring rival Hillary Clinton.

Sanders has remained steadfast in his long-shot battle with Clinton for the Democratic nomination for the November 8 presidential election, even though he lags her in the delegate count with only a few state contests remaining. The divisiveness among the Democrats stands in contrast to the Republicans, whose party leaders are slowly rallying behind Donald Trump, their presumptive nominee.

Sanders‘ tenacity appeared to be paying off. The US senator from Vermont will be allowed to name five members to the 15-member committee that writes the platform at the Democratic National Convention in late July in Philadelphia even if he is not the nominee. Clinton will name six.

The party said in a statement the split was based on the results of state votes to date “in an effort to make this the most representative and inclusive process in history.”

The Democratic Party‘s rules allow the chair to name all 15 members, suggesting the party was trying to accommodate Sanders and his fervent supporters, who still pack rallies by the thousands as he campaigns in California, which will hold its primary on June 7.

Sanders did little to dispel the acrimony between himself and the party, which he joined only last year after more than two decades in Congress as an independent, when he said over the weekend he was endorsing Wasserman Schultz’s Democratic opponent in her Florida congressional district.

On Monday, he repeated some of his criticisms of Clinton, who he has suggested is vulnerable to influence by corporate donors to her campaign, which she denies.

Sanders also told the Associated Press in an interview that if Democratic leaders open the convention’s doors “to working-class people and young people and create the kind of dynamism that the Democratic Party needs, it’s going to be messy.”

“Democracy is not always nice and quiet and gentle but that is where the Democratic Party should go,” he added.

The Clinton campaign said it was pleased to see Sanders represented, describing the party as a “big tent.”

Sanders, who has criticized Clinton for being too biased toward Israel, has named a pro-Palestinian activist and a prominent environmentalist among his picks for the committee.

Clinton has said she now considers herself the de facto Democratic nominee. Increasingly, she has turned her attention to attacking Trump as a “bully” when speaking at campaign events while urging Sanders supporters to rally to her side.

She told labour union members in Detroit on Monday that if elected, she would embrace issues important to Sanders‘ supporters, including reform of campaign financing and reducing income inequality.

Underlining Clinton’s confidence that she will become the Democratic candidate, her campaign said on Monday she would not participate in a debate with Sanders in California, despite having previously agreed to attend the event hosted by Fox News.

Trump is steadily escalating his criticism of both Hillary and Bill Clinton’s relationship with women, using rhetoric that has little precedent in US presidential politics.

On Monday, Trump circulated a new online video that shows images of Bill Clinton, the former president, as voices of women play on the soundtrack saying he had assaulted them, before ending with the sound of Hillary Clinton, his wife, laughing.

Although none of the women are identified in the video, one of the voices is that of Juanita Broaddrick in an NBC interview from 1999 in which the former nursing-home manager accused Bill Clinton of raping her in a hotel in Little Rock, Arkansas, in 1978.

The Clintons’ lawyer, David Kendall, said in 1999 that the accusation was false. The Clintons have declined to discuss the accusation and are ignoring his personal attacks, with Hillary Clinton saying instead she will defend vulnerable Americans from the consequences of Trump’s proposals.

“Trump economics is a recipe for lower wages, fewer jobs, more debt,” she told the union members on Monday. “He could bankrupt America like he bankrupted his companies. I mean, ask yourself: How can anybody lose money running a casino, really?”