US Congress Convenes a Younger, Bluer and More Diverse Body

A year fraught with partisan infighting and a national debate around sexism and sexual harassment ended with the election of a Congress whose composition can only be described in superlatives.

New Delhi: The 116th Congress sworn into office on January 3 is shaping up to be the most racially diverse yet, with almost one-third of those elected to the lower house as women.

2018 saw an extraordinary surge in women running for public office, leading many to dub the midterms as the “Year of the Women” in reference to the 1992 US midterm elections when the country elected a record-breaking four women to the US Senate. Much like 2018, in 1992, the US was grappling with a high profile case of sexual misconduct against the US Supreme Court nominee Clarence Thomas. Thomas was eventually confirmed by the Senate after an all-male Senate judiciary committee grilled the accuser Anita Hill about her allegation of sexual harassment against Thomas.

Hillary Clinton’s shocking defeat in the 2016 elections, followed by the unravelling of numerous accounts of sexual harassment perpetrated by men in positions of power under the #MeToo movement, galvanised a record number of 257 women to run for office in the House and the Senate. There were more women vs. women contests in 2018 than ever before – reflecting the energy mobilised by the women’s marches against Trump.

In addition to being one of the youngest in recent times, the new Congress also boasts of the largest number of female, people of colour and LGBTQ representatives ever who will take their seats as Democrats solidify their control over the US House of Representatives.

But this diversification amongst the ranks of the US Congress was hardly bipartisan. The Republican party saw a decline in the number of women representing them in the house, although the number of female Republican senators did increase. One quarter of the Senate now comprises of women – making it the greatest female representation in the Senate to date.

A record number of firsts

Alexandria Ocasio-Cortez’s defeat of longtime incumbent Democrat Joseph Crowley for New York’s 14th Congressional District in the primaries was just one of several Democrat upsets that reverberated across the nation and was indicative of just how much dissatisfaction was brewing against reigning leaders.

Additionally, at 29-years old, Alexandria Ocasio-Cortez is the youngest women ever elected to Congress along with Abby Finkenauer. At her swearing-in ceremony, Cortez wore an all white suit to pay homage to notable suffragettes who fought for women’s right to vote.

Ayanna Pressley became the first black woman elected to Congress from Massachusetts. Pressley, too, toppled a ten-term Democrat Congressman during the 2018 primaries. 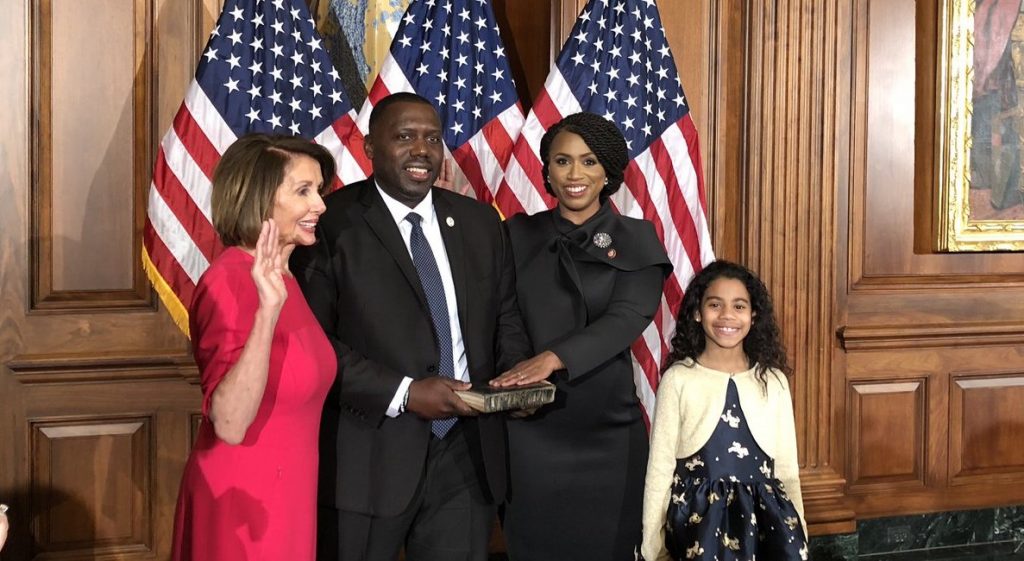 Democratic Representative Ilhan Omar from Minnesota and Rashida Tlaib from Michigan became the first Muslim women elected to Congress. Tlaib is also the first Palestinian-American women ever to be elected to Congress and was sworn-in on a Qu’ran formerly owned by Thomas Jefferson while wearing a traditional Palestinian Thobe to commemorate her roots.

Ilhan Omar became the first Somali-American woman of colour elected to Congress from Minnesota and the first woman to wear a hijab in Congress, where head coverings have been banned in the House since 1837 – a rule which she pushed to change even before she was sworn-in.

23 years ago, from a refugee camp in Kenya, my father and I arrived at an airport in Washington DC.

Today, we return to that same airport on the eve of my swearing in as the first Somali-American in Congress. #Hope #Ilhan ?? pic.twitter.com/jVeP3DOipN

Democratic Representative Deb Haaland of New Mexico joined Sharice Davids of Kansas to become the first Native American women to be elected to Congress. Davids is the first openly LGBTQ person elected to Congress from Kansas. Veronica Escobar and Sylvia Garcia also made congressional history as the first-ever Latina women elected to represent the predominantly conservative red state of Texas in the US House of Representatives.

The first two Native-American women to serve in Congress embrace one another. ❤️?
pic.twitter.com/nNmuMXbknk

In an ostensible pushback against the Trump administration’s throttling of LGBT rights, a record breaking number of LGBTQ members ran for elections in 2018.  Four newly elected LGBT members will join the ranks of their Democratic peers alongside four incumbent Democrat representatives.

As the GOP lurched more and more to the right, 2018 was marked by several upsets that calcified a strident progressive faction within the Democratic party. Ocasio-Cortez, Tlaib, Omar and Massachusetts’ Ayanna Pressley openly criticised the corporate interests and centrist postures that dominate the party’s leadership.

Several new members of the incoming Congress are expected to challenge establishmentarian stances on a wide variety of policy issues ranging from healthcare, immigration, gun control, education, abortion rights and LGBTQ rights. Even in the realm of foreign policy, the newcomers have already disrupted the status quo with their willingness to criticise Israel.

Longtime Democratic leader Nancy Pelosi of California also made history when she reclaimed the title of the Speaker of the House that she held from 2007 to 2011 – when she served as the first, and only, female House speaker. Evoking former President Ronald Reagan’s words, she said, “If we ever closed the door to new Americans, our leadership in the world would soon be lost.”

When the new Congress gets underway, Pelosi and her party will be ready to challenge the White House with investigations and subpoenas that will threaten to derail the Trump administration’s agenda. The convening of the new Congress will de facto throw open the campaigning for the 2020 presidential elections.

If the representation reflected in the new Congress is any indicator, the GOP is likely to face some tough competition ahead of the 2020 US presidential elections if Donald Trump decides to seek another term.