US Challenged China, India and 11 Other Countries on Navigation Rights Last Year

The freedom of navigation operations involve sending US navy ships and military aircrafts into areas where other countries have tried to limit access, to demonstrate that the international community does not accept such restrictions. 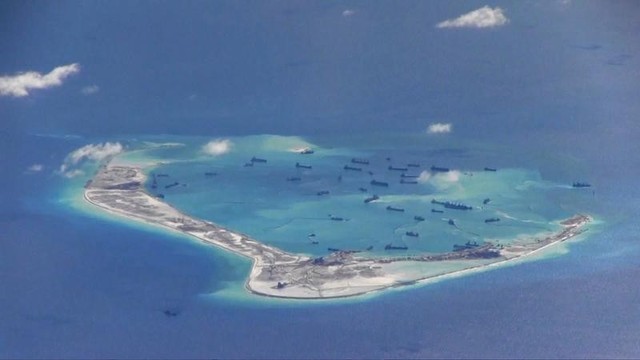 Chinese dredging vessels are purportedly seen in the waters around Mischief Reef in the disputed Spratly Islands in the South China Sea in this still image from video taken by a P-8A Poseidon surveillance aircraft provided by the United States Navy May 21, 2015. Credit: Reuters/US Navy/Handout via Reuters

Washington: The US military conducted “freedom of navigation” operations against 13 countries last year, including several to challenge China’s claims in the South and East China seas, according to an annual Pentagon report released on Monday.

The operations were against China, India, Indonesia, Iran, Libya, Malaysia, the Maldives, Oman, the Philippines and Vietnam, the report said.

It did not specify how many such operations were conducted against each of those countries. The US military carried out single operations against Taiwan, Nicaragua and Argentina, for a total of 13 countries, the department said in the two-page report.

The freedom of navigation operations involve sending US navy ships and military aircrafts into areas where other countries have tried to limit access. The aim is to demonstrate that the international community does not accept such restrictions.

The US military has repeatedly conducted operations disputing China’s maritime claims in recent years and did so again in 2015, a year in which Beijing’s island-building activity in the resource-rich areas of the South China Sea led to rising tensions in the region.

A US guided-missile destroyer conducted a freedom of navigation patrol near one of China’s man-made islands in the Spratly archipelago in October. US military flights near the islands have been warned off.

US Defence Secretary Ash Carter said the navy would continue to operate in the region despite China’s condemnation of the patrols.

China’s defence ministry said in a statement on its website late on Monday that it was deeply concerned by such operations.

“The United States carries out militarization in the South China Sea in the name of freedom of navigation and overflight, threatens coastal nations’ sovereignty and security and destroys regional peace and stability,” the ministry said.

It made the comment in response to what it said were reports of recent US military flights near Scarborough Shoal – known by Beijing as Huangyan Island – an area China seized control of after a stand-off with the Philippine coast guard in 2012.

Admiral Harry Harris, the head of US Pacific Command, said this year the navy would step up the freedom of navigation operations in the South China Sea because of concerns China is attempting to assert its dominance by building military facilities there.

US freedom of navigation operations last year also challenged China’s claims of jurisdiction in the airspace above its maritime Exclusive Economic Zone as well as restrictions it has tried to impose on aircraft flying through an Air Defense Identification Zone over the East China Sea.

The number of countries the United States challenged last year was down from 2014, when it targeted 19 countries. That was the largest number in more than a decade.

Iran and the Philippines have been the most frequently challenged countries over the years, mainly because they sit astride busy sea lanes whose use they have tried to limit or govern.