Captured on land, intercepted at sea, cuffed and injured by militias and human traffickers, migrants are sent to detention centres and exposed to every abuse possible. 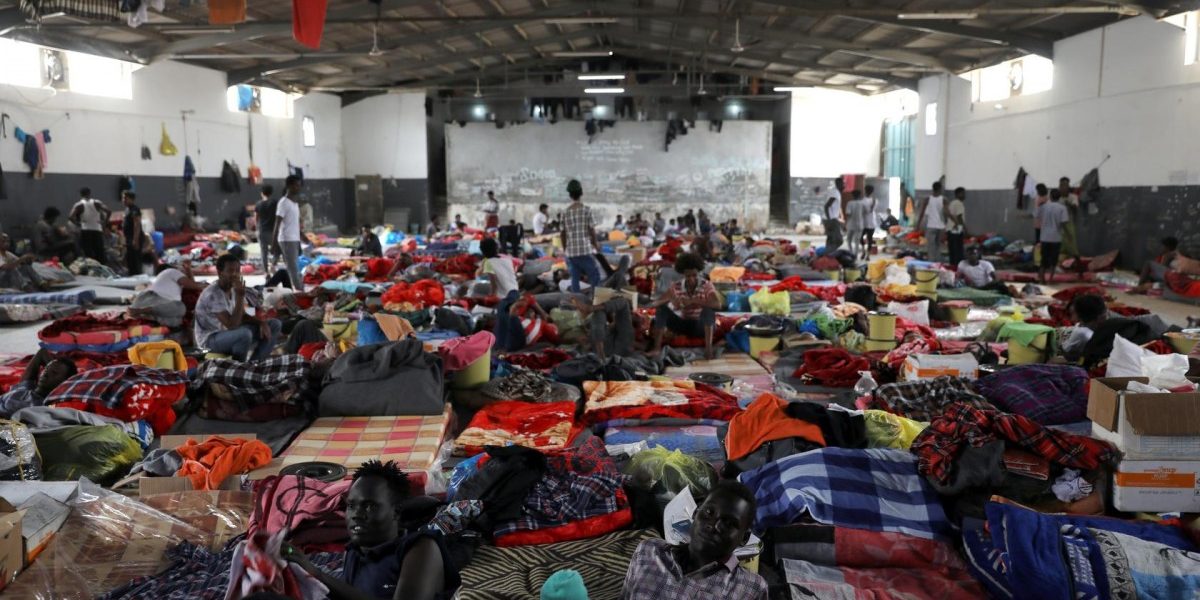 United Nations:  For over 10,000 migrants fleeing to Libya from war and violence, their fate often comes down to the mercy of human traffickers or the dark unknown awaiting in detention centres.

The northern shores of Libya – the largest departure point for African migrants hoping to reach Europe – is a hotbed for modern-day slavery. Captured on land, intercepted at sea, cuffed and injured by militias and human traffickers, migrants are sent to detention centres and exposed to every abuse possible.

“From the moment [migrants] step onto Libyan soil, they become vulnerable to unlawful killings, torture and other ill-treatment, arbitrary detention, unlawful deprivation of liberty and rape,” according to a report by the United Nations Support Mission in Libya (UNSMIL).

Also read: Migrants Cheer as Rescuers Tell Them “Libya Is Over”

However, not only has Libyan authority taken no measures to systematically address the issue, it has expanded its migrant detention capability with the aid of European governments.

The detention centres, controlled by Libya’s Ministry of Interior and guarded by the militias of the Government of National Accord (GNA), often hold hundreds of migrants in overcrowded spaces without proper ventilation or drinkable water.

“In some parts of the centre, toilets are overflowing and are in urgent need of repair. As a result, solid waste and garbage has piled up inside the cell for days and presents a serious health threat,” a spokesperson for the UN’s refugee agency said in a statement.

The medical humanitarian organisation Doctors Without Borders (MSF) has called the situation “a disaster,” noting that hundreds of detained migrants use “four barely functioning toilets, no shower and only sporadic access to water” in a visit to Zintan detention centre.

Dr. Hussein Hassan, emergency coordinator from the World Health Organization (WHO) Libya office, told IPS: “TB with other respiratory infections, HIV and skin diseases are some of the conditions that migrants in more than 34 centres are suffering from.” 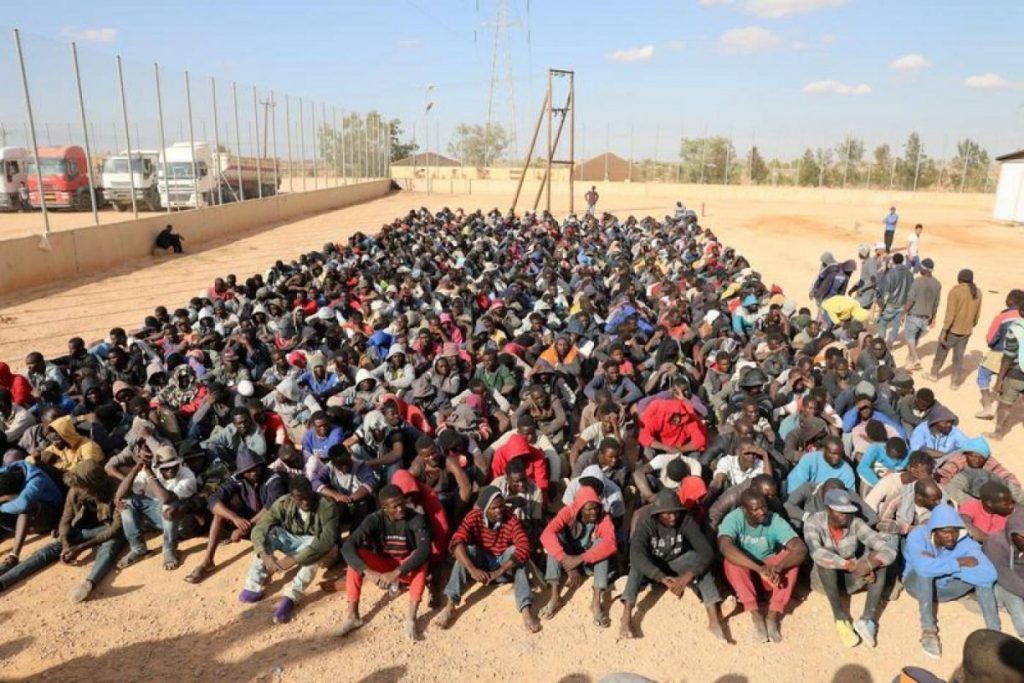 Migrants sit at a detention centre in Gharyan. Photo: Reuters

Although a TB screening campaign was done in January, those tested positive for TB were kept in the same room with the rest. According to Dr. Hassan, 16 migrants contracted with TB are in worse condition due to interruptions in medical treatment and lack of proper referral system.

An internal UN report leaked to the Irish Times said that more than 80% of migrants in Zintan detention centre may have been infected with TB.

But TB is not the only disease present in the health crisis, according to MSF.

“Many of them suffer from malnutrition, skin infections, acute diarrhoea, respiratory tract-infections and other ailments, as well as inadequate medical treatment,” MSF said in a statement. “Children are held with adults in same squalid conditions.”

“We have been abandoned here, I cannot go back and no one wants us anywhere,” an Eritrean refugee told MSF. “I don’t know where my place on earth is.”

Exploited by human traffickers and traded as commodities, migrants fear for their daily survival.

“Migrants held in the centres are systematically subjected to starvation and severe beatings, burned with hot metal objects, electrocuted and subjected to other forms of ill-treatment with the aim of extorting money from their families through a complex system of money transfers,” the UNSMIL report said.

Following the bloody civil war in 2011 that brought down military dictator Muammar Gaddafi, Libya fell in the hands of rival factions and Islamist groups. Two forces in the west and north fought to control the country’s oil fields. The period of lawlessness gave rise to smuggling and trafficking along Libya’s borders and coastlines.

Most migrants enter through the country’s southern border. But the warfare between the Libyan National Army and the UN-backed Government of National Accord (GNA) has left southern Libya lawless and unpatrolled.

Traffickers have created an online market for illegal weapons despite the arms embargo posed by the UN Security Council, adding further uncertainty to the political situation.

“Seemingly unlimited arms supply fuels the erroneous belief in a military solution to the conflict and contributes to the unwillingness of actors on the ground to agree to a ceasefire,” said Jürgen Schulz, Deputy Permanent Representative of Germany to the UN.

Amid the chaos, migrants are left helpless.

“Countless migrants and refugees lost their lives during captivity by smugglers, after being shot, tortured to death, or simply left to die from starvation or medical neglect,” the UNSMIL report added. “Across Libya, unidentified bodies of migrants and refugees bearing gunshot wounds, torture marks and burns are frequently uncovered in rubbish bins, dry river beds, farms and the desert.”

“We are dying,” detainees told the United Nations Children’s Fund (UNICEF). “We live like animals; they beat us everyday.”

Libyan law groups migrants, political refugees and asylum seekers in the same category under the supervision of the Interior Ministry of Department of Combating Illegal Migration (DCIM).

Even if migrants manage to escape from human traffickers and the DCIM’s search and capture along the northern coastline, European patrol ships in the Mediterranean Sea intercept and return migrant boats to Libya.

The European Union (EU) has invested millions of euros in the Libyan Coast Guard in the name of “efficient border management,” fully aware that those returned can only expect indefinite servitude and abuse.

“The actions of European governments have made it extremely difficult for search and rescue organisations to continue their life-saving work,” the letter said, calling an end to returning migrants to Libya.

Italy – where most migrants land after a journey across the Mediterranean – has been intercepting migrant boats and assisting to transfer migrants back to Libya since 2009. Although deemed a violation by the European Court of Human Rights’ in 2012, Italy’s effort to guard off African migrants has only intensified since then.

In 2017, the Italian parliament signed a legislation that deploys Italy’s Navy to Libyan waters, aiming to assist the Libyan Coast Guard to “fight against illegal immigration and human trafficking.”

More than 10,000 have died crossing the Mediterranean since 2014, according to the International Organization for Migration (IOM).

Yet for migrants fleeing from the insufferable, that stretch of water still represents hope.