The UN peacekeeping mission in Haiti has been dogged by controversies, including the introduction of cholera to the island and sexual abuse claims. 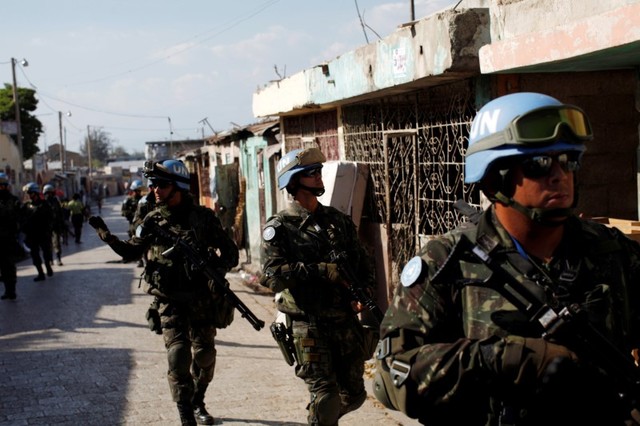 UN: The UN Security Council voted unanimously on Thursday to end its 13-year-long peacekeeping mission in Haiti and replace it with a smaller police, which would be drawn down after two years as the country boosts its own force.

The peacekeeping mission, one of the longest running in the world and known as MINUSTAH, has been dogged by controversies, including the introduction of cholera to the island and sexual abuse claims.

The 15-member Security Council acknowledged the completion of Haiti’s presidential election, along with the inauguration of its new president, as a “major milestone towards stabilisation” in the Caribbean country.

“What we now need is a newly configured mission which is focussed on the rule of law and human rights in Haiti,” British UN ambassador Matthew Rycroft said on his way into the meeting.

“Peacekeepers do fantastic work but they are very expensive and they should be used only when needed,” Rycroft said. “We strongly support the ending of this mission turning it into something else. And I think we’ll see the same thing elsewhere.”

The shutdown of the $346 million mission, recommended by UN chief Antonio Guterres, comes as the US looks to cut its funding of UN peacekeeping. Washington is the largest contributor, paying 28.5% of the total budget.

There are 2,342 UN troops in Haiti, who will withdraw over the coming six months. The new mission will be established for an initial six months, from October 16, 2017 to April 15, 2018, and is projected to exit two years after its establishment.

“The UN has held our hands to help us through very difficult steps, but we cannot indefinitely depend on them for the country’s security and stability,” he said.

UN peacekeepers were deployed to Haiti in 2004 when a rebellion led to the ouster and exile of then-President Jean-Bertrand Aristide. It is the only UN peacekeeping mission in the Americas.

Haiti suffered a two-year political crisis until the recent election and inauguration of Moise as president. It has suffered major natural disasters, including an earthquake in 2010 and Hurricane Matthew last year. But the impoverished Caribbean country has not had an armed conflict in years.

UN peacekeepers have been accused of sexual abuse and blamed for the cholera outbreak. Haiti was free of cholera until 2010, when peacekeepers dumped infected sewage into a river.

The UN does not accept legal responsibility for the outbreak of the disease, which causes uncontrollable diarrhoea. Some 9,300 people have died and more than 800,000 sickened due to cholera and Haiti’s government believes the UN still has work to do on it.

“The UN promised to help eradicate the disease in the country and assist families who lost their loved ones. We expect the UN to fulfil its commitments,” said Moise spokesman Jura.