Fears of a potential nuclear disaster at the Zaporizhzhia plant had spread alarm across world capitals, before authorities said the fire in a building identified as a training centre, had been extinguished. 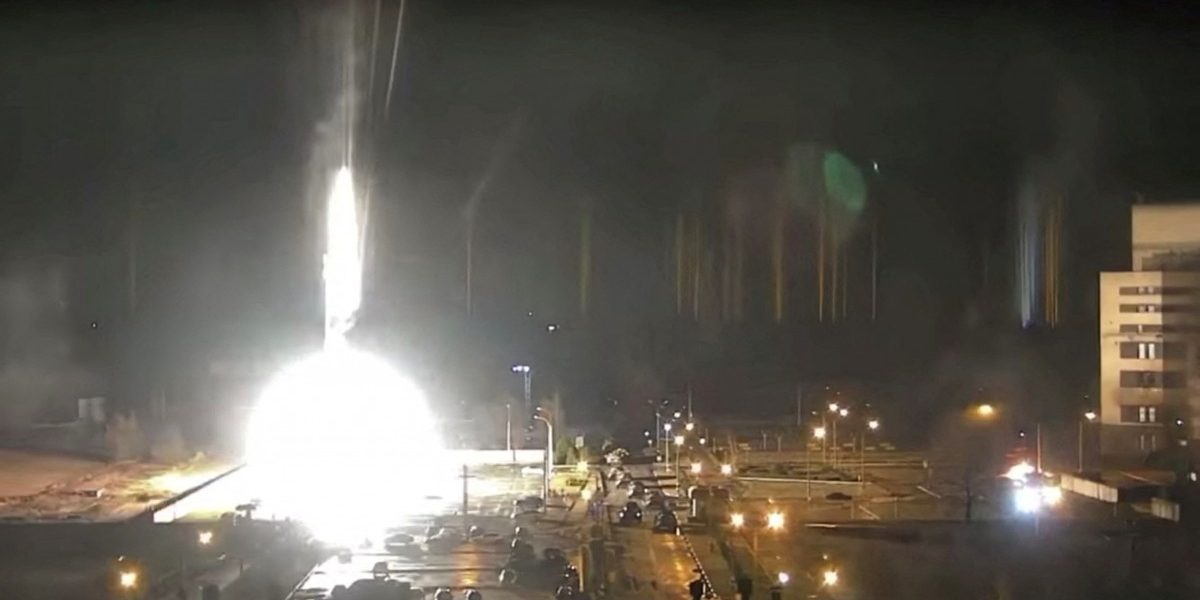 Surveillance camera footage shows a flare landing at the Zaporizhzhia nuclear power plant during shelling in Enerhodar, Zaporizhia Oblast, Ukraine March 4, 2022, in this screengrab from a video obtained from social media. Zaporizhzhya NPP via YouTube/via REUTERS

Lviv: Russian forces seized the largest nuclear power plant in Europe after a building at the complex was set ablaze during intense fighting with Ukrainian defenders, Ukrainian authorities said on Friday.

Fears of a potential nuclear disaster at the Zaporizhzhia plant had spread alarm across world capitals, before authorities said the fire in a building identified as a training centre, had been extinguished.

US energy secretary Jennifer Granholm said there was no indication of elevated radiation levels at the Zaporizhzhia plant, which provides more than a fifth of total electricity generated in Ukraine.

An official at the state enterprise that runs Ukraine’s four nuclear plants said there was no further fighting, the fire was out and Zaporizhzhia was operating normally.

“(Nuclear power plant) personnel are on their working places providing normal operation of the station.”

Earlier, a video from the plant verified by Reuters showed one building aflame, and a volley of incoming shells, before a large candescent ball lit up the sky, exploding beside a car park and sending smoke billowing across the compound.

Zelenskiy said Russian tanks had shot at the nuclear reactor plants, though there was no evidence cited that they had been hit.

The mayor of the nearby town of Energodar about 550 km (342 miles) southeast of Kyiv said fierce fighting and “continuous enemy shelling” had caused casualties in the area, without providing details.

Thousands of people are believed to have been killed or wounded and more than one million refugees have fled Ukraine since Russian President Vladimir Putin last Thursday launched the biggest attack on a European state since World War II.

Early reports of the incident at the power plant sent financial markets in Asia spiralling, with stocks tumbling and oil prices surging further.

“Markets are worried about nuclear fallout. The risk is that there is a miscalculation or over-reaction and the war prolongs,” said Vasu Menon, executive director of investment strategy at OCBC Bank.

Russia has already captured the defunct Chernobyl plant, about 100 km north of Kyiv, which spewed radioactive waste over much of Europe when it melted down in 1986. The Zaporizhzhia plant is a different and safer type, some analysts said.

US President Joe Biden and UK Prime Minister Boris Johnson both spoke with Zelenskiy to get an update on the situation at the plant.

“President Biden joined President Zelenskiy in urging Russia to cease its military activities in the area and allow firefighters and emergency responders to access the site,” the White House said.

Also read: As Ukraine Burns, India Must Contend With the Worrisome Prospect of a Russia-China Symbiosis

Johnson said Russian forces must immediately quit their attack and agreed with Zelenskiy that a ceasefire was crucial.

“The prime minister said the reckless actions of President Putin could now directly threaten the safety of all of Europe,” Downing Street said.

Energy secretary Granholm said on Twitter the reactors at Zaporizhzhia were “protected by robust containment structures” and were being “safely shut down”.

The plant’s reactors are protected by robust containment structures and reactors are being safely shut down. 3/3

The head of the International Atomic Energy Agency said he was “deeply concerned” with the situation at the power plant and was in contact with Ukrainian authorities.

On Thursday, Russia and Ukraine negotiators agreed to the need for humanitarian corridors to help civilians escape and to deliver medicines and food to the areas where fighting was the fiercest.

Only one Ukrainian city, the southern port of Kherson, has fallen to Russian forces since the invasion was launched on Feb. 24, but Russian forces continue to surround and attack other cities.

Mariupol, the main port on the Sea of Azov, was surrounded and under heavy bombardment. Water and power was cut off, and officials say they cannot evacuate the wounded.

The northeastern city of Kharkiv has been under attack since the start of the invasion, but defenders are holding out in the heavily shelled city.

While no major assault has been launched on Kyiv, the capital has been shelled, and Russian forces unleashed devastating firepower to break resistance in the outlying town of Borodyanka.

In Washington, a US defense official said Russian troops were still 25 km (16 miles) from Kyiv city centre. Earlier on Thursday, the British Ministry of Defence said a huge Russia convoy rumbling southwards toward Kyiv, was advancing slowly, partly due to resistance, but also due to logistical issues.

The United States and Britain announced sanctions on more Russian oligarchs on Thursday, following on from EU measures, as they ratcheted up the pressure on the Kremlin.

Also read: What India Needs to Do to Deal With the Consequences of the Russia-Ukraine War

Sanctions have “had a profound impact already,” Biden said.

Russia calls its actions in Ukraine a “special operation” that is not designed to occupy territory but to topple the democratically elected government, destroy its neighbour’s military capabilities and capture what it regards as dangerous nationalists. It denies targeting civilians.

“Russia should be thrown back into the Stone Age to make sure that the oil and gas industry and any other sensitive industries that are vital for survival of the regime cannot function without Western technological support,” Kasparov said.

This story was published on March 4, 2022 at 12:19 pm and is being republished with an update on Russia seizing Ukraine’s nuclear plant.