At the end of the two-day meeting, UNSC's counter-terrorism committee adopted the 'Delhi Declaration' listing the council's priorities in combating the challenge of terrorism and terror financing. 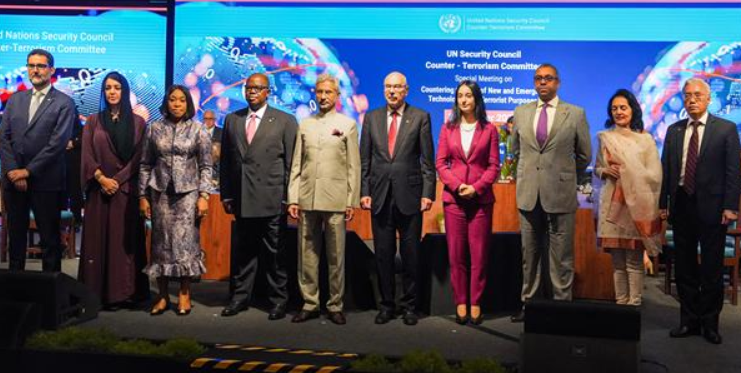 New Delhi: Even as members of the UN Security Council pledged their support for combating terrorism, developments in Ukraine cast a shadow with Russia and western countries trading verbal volleys over the drone attack against Russian naval forces at Crimea’s Sevastopol port.

On the second day, the special meeting of the UNSC’s counter-terrorism committee moved to the Indian capital and concluded with the adoption of a Delhi Declaration.

With the discussions and presentations revolving around the use of new technologies, like drones and artificial intelligence, by terrorists, the national interventions by representatives of some of the 15 UNSC members inevitably referred to the Ukraine war.

The French representative noted that “on the battlefield”, states were “indiscriminately” using unmanned aerial vehicles (UAV) in violation of international law, “like Russia against Ukraine”.

The western countries have accused Iran of supplying military-grade drones to Russia, but Tehran and Moscow deny it. The Ukrainian president Volodymyr Zelensky posed with a downed Iranian Shahed drone this week. He said Russia had launched more than 30 drone attacks over two days, mainly attacking civilian infrastructure.

Delivering the statement, the Russian representative claimed that the West, mainly the UK, supplied UAVs to the Ukraine government. “We know that the Kyiv regime is supplied by those instruments by western regimes, including Great Britain and France,” he said.

Earlier, Moscow had claimed that Ukrainian forces, with the help of drones, attacked ships from the Black Sea Fleet in Sevastopol, the biggest city in Crimea, in the early hours of Saturday. Subsequently, Russia announced it was suspending participation in an UN-brokered deal to export agricultural produce from Ukrainian ports.

Not surprisingly, the Russian diplomat raised the matter at a UNSC panel’s meeting in New Delhi, accusing the UK of “direct participation” in the drone attack.

He stated that “all of our efforts should be used to prevent terrorism by UAVs that can also be used for military purposes”.

The senior US and UK diplomats who spoke after the Russian statement both indicated that Russia was making “false claims” to deflect its “illegal” invasion of Ukraine.

After getting permission to make another intervention, the Russian diplomat also reiterated Moscow’s allegations about the UK’s role in the Sevastopol drone attack.

Asserting that “British engineers” were behind the attack, he said that the preparation and training of the “militia” took place in the Ukrainian city of Ochakiv. “And all was managed by the UK military engineers.”

Stating that the West “blatantly lies” and follows “double standards”, the Russian diplomat added, “May I also highlight that these weapons are channelled to international terrorists.”

The UK response was terse. “Let me re-emphasise that Russia started the violence with the illegal invasion of Ukraine. Russia alone can end the violence in Ukraine,” said the British representative.

The release of Delhi Declaration

At the end of the two-day meeting, UNSC’s counter-terrorism committee adopted the ‘Delhi Declaration’ listing the council’s priorities in combating the challenge of terrorism and terror financing.

In the declaration, the global body expressed concerns over the increasing use of the Internet and other information and communications technologies, including social media platforms, for terrorist purposes.

It said innovations in financial technologies, such as crowdfunding platforms, present a risk of being misused for terrorist financing and noted with concern the increasing global misuse of unmanned aerial systems by terrorists to conduct attacks against critical infrastructure.

The counter-terrorism committee urged all member states to ensure ”zero tolerance” towards terrorism, consistent with their obligations under international laws, including human rights law.

The meeting underlined the need for taking ”urgent action” to counter-terrorism in all its forms and manifestations through the full and effective implementation of various UN resolutions.

The committee reaffirmed that terrorism in all forms constitutes ”one of the most serious threats” to international peace and security and vowed to contribute further to enhancing the effectiveness of the overall effort to fight the scourge on a global level.

It said terrorism should not be associated with any religion, nationality, civilisation or ethnic group and called on member states to continue their efforts towards the Comprehensive Convention on International Terrorism.

It also noted the importance of continuing discussions on the misuse of emerging technologies for terrorist purposes in other relevant international forums, including the G20.

The committee emphasised the need for member states and counter-terrorism committee executive directorate to continue cooperation with the private sector and civil society for more effective means to counter the use of new and emerging technologies for terrorist purposes.