'We Have Listened': Truss Government Forced to Reverse Course on Tax Cuts

In light of the havoc wreaked on the markets by the new government's 'growth plan' announced last month, finance minister Kwasi Kwarteng said that the policy u-turn was taken with "some humility and contrition". 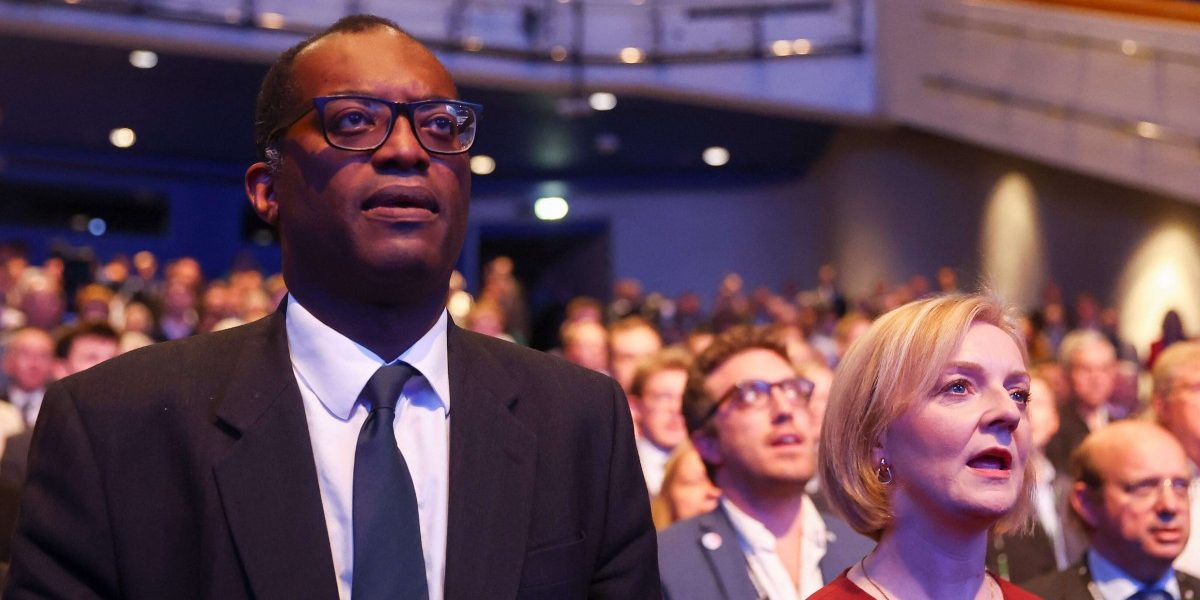 Birmingham: British Prime Minister Liz Truss was forced on Monday, October 3, into a humiliating U-turn after less than a month in power, reversing a cut to the highest rate of income tax that helped spark turmoil in financial markets and a rebellion in her party.

Finance minister Kwasi Kwarteng said the decision to scrap the top rate tax cut had been taken with “some humility and contrition.”

Truss and Kwarteng announced a new “growth plan” on September 23 that would cut taxes and regulation, funded by vast government borrowing, to snap the economy out of years of stagnant growth.

But the plan triggered a crisis of investor confidence in the government, hammering the value of the pound and government bond prices and jolting global markets to such an extent that the Bank of England had to intervene with a 65 billion pound ($73 billion) programme to shore up markets.

Also read: Is The UK In A Recession? How Central Banks Decide And Why It’s So Hard To Call It.

With the government’s credibility damaged, lawmakers in the governing Conservative Party said the reversal was inevitable. “So now it’s ‘survive a day at a time’,” one party insider said, declining to be named.

While the removal of the top rate of tax only made up around 2 billion out of the 45 billion pounds of unfunded tax cuts, it was the most divisive element of a package that drew the wrath of markets by failing to set out how it would be paid for.

Less than a day after Truss went on BBC television to defend the policy, Kwarteng released a statement saying he now accepted it had become a distraction from wider efforts to grow the economy and help households through a difficult winter.

“We listened to people and yes there is some humility and contrition,” he told BBC Radio. “And I’m happy to own it.”

The decision to reverse course is likely to put Truss and Kwarteng under even greater pressure, the latest embarrassing political U-turn in a country that has had four prime ministers in the last six years.

Kwarteng said he had not considered resigning. He said he had decided to reverse course in conjunction with the prime minister.

“It is astonishing,” another lawmaker said. “We were left in an impossible position. The damage has already been done. We just look incompetent now, too.”

Britain’s opposition Labour Party said the government had destroyed its economic credibility and damaged trust in the economy. “They need to reverse their whole economic, discredited trickle down strategy,” Labour’s finance spokesperson Rachel Reeves said in a statement.

Truss, Britain’s 47-year-old former foreign minister who took office on September 6 after winning a leadership contest among Conservative Party members, and not the country, had defeated former finance minister Rishi Sunak by vowing to put an end to “Treasury orthodoxy”.

She had argued that the government needed a radical plan to rescue the economy and make the country more dynamic, and that she was willing to take unpopular decisions to make it happen.

On their first day in office, Truss and Kwarteng then fired the most senior official in the Treasury department before releasing a policy that had not been costed or scrutinised by the independent Office for Budget Responsibility.

Investors – used to Britain being a pillar of the global financial community – took fright, hammering the value of British assets and driving up the cost of government borrowing, mortgage rates and corporate lending.

With Conservative lawmakers growing increasingly alarmed, Truss also failed to rule out that cuts to spending on public services and a limit to welfare benefit payments would be needed to pay for the policy.

As a growing number of lawmakers came out against the policy, the chairman of the Conservative Party, Jake Berry, warned that anyone voting against the package would be thrown out of the parliamentary party.

“We get it and we have listened,” Truss said on Twitter. “The abolition of the 45% rate had become a distraction from our mission to get Britain moving.”

We get it and we have listened.

The abolition of the 45pc rate had become a distraction from our mission to get Britain moving.

Our focus now is on building a high growth economy that funds world-class public services, boosts wages, and creates opportunities across the country. https://t.co/ee4ZFc7Aes

Investors and economists said the reversal was a step in the right direction but the government needed to go further. It is not due to release a fiscal statement with the full scale of government borrowing and debt cutting plans until November 23.

“The issue was not tax changes announced at the mini-budget but the institutional ‘scorched earth policy’ that preceded it,” said Simon French, chief economist of brokerage Panmure Gordon. “UK risk premia will likely only pull back if that is addressed.”

Conservative lawmakers told Reuters that the government had no choice but to reverse course. “It’s the right thing to do, but it’s unfortunate how it’s been managed,” one said, declining to be named. Another added: “More structure, clearly, is needed in decision-making.”