Erdogan is using the opportunity provided by the attempted coup to crack down on those who, according to him, are a part of the Gulenist "parallel structure". 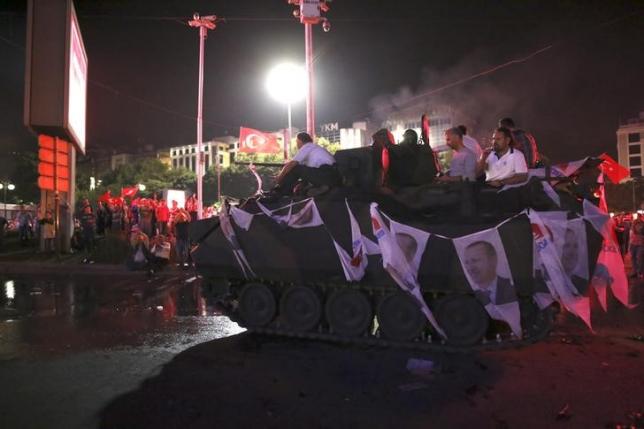 Turkish President Recep Tayyip Erdoğan’s power grab at the expense of the country’s democratic principles predates the failed coup of July 16 by many years.

His creeping authoritarianism dates back at least to the Ergenekon, Balyoz and associated trials of members of the so-called “deep state” in 2008. Since then detention of soldiers, but also businessmen, bureaucrats, journalists and the like has led inexorably to trials that have resulted in the imprisonment of hundreds of military officers – many of them senior officials, including Ilker Basbug, the former chief of the general staff, who was sentenced to life imprisonment.

Lawyers and policemen allegedly loyal to the Turkish cleric Fethullah Gülen had provided the momentum behind the demolition of the “deep state” and the weakening of the military’s political power. This very much suited Erdoğan’s ruling Islamist Justice and Development Party (AKP), which was fearful that the notoriously secular military might conduct a coup against its hold on office.

Fethullah Gülen lives in exile in Pennsylvania and presides over a vast network of businessmen, journalists, intellectuals and professionals of all kinds. The tentacles of this network extend to commerce, education, charities and the media, as well as government. US-based cleric Fethullah Gulen, whose followers Turkey blames for a failed coup, is shown in still image taken from video, as he speaks to journalists at his home in Saylorsburg, Pennsylvania July 16, 2016. Credit: Reuters/Greg Savoy

In retrospect, we can see that Erdoğan’s previous alliance with the Gulenists was simply one of convenience. When a group of Erdoğan associates, including his own son, were investigated for corruption in December 2013, again by allegedly Gulenist law enforcement agencies, Erdoğan decided that the network – or hizmet as it calls itself – now constituted a major threat to his hold on and enjoyment of power. He has been relentlessly purging supposed Gulenists from public office ever since, accusing them of having established a “parallel structure”.

The police and judiciary had already lost tens of thousands of alleged sympathisers to the purges in the years preceding the attempted coup on July 16. The foreign, interior and other ministries have also been extensively purged. In the wake of the Gezi Park protests of 2013, journalists and academics have been detained, intimidated or sacked. Turkey’s media is cowed where it is not directly under government control and its intellectuals are frightened.

Erdoğan has also used his years in office to mould his party to his own image. He has ousted or marginalised possible challengers – most recently the prime minister, Ahmet Davutoglu. Erdoğan’s adoring supporters appear unfazed by such developments.

A gift from God

Earlier this year the sentences that had been imposed on military officers following the “deep state” trials were annulled. Even so it is likely that the military remained the government institution that Erdoğan least trusted. This is why the failed coup attempt was described by Erdoğan himself as a “gift from God”.

In the wake of the coup more than 100 – almost a third – of the military’s most senior officers were detained, and 6,000 others taken into custody. But that is not all. Erdoğan is using the opportunity presented by the coup to detain or oust from office thousands of lawyers, policeman, interior and other ministry bureaucrats, regional governors, and is also now turning his attention to businessmen, journalists and academics who may have grumbled against him – or, according to Erdoğan, are part of the Gulenist “parallel structure”.

There is even talk of reintroducing the death penalty for the coup plotters. In short, the outcome of the coup attempt’s failure will not be democracy but rather Erdoğan’s ever more tightening grip over all levers of power. It looks like Turkey will find itself subjected to a civilian dictatorship hardly less repressive than a military one would have been – although again, his own supporters might not object.

The reintroduction of the death penalty alone will prove sufficient to put an end to Turkey’s (in any case implausible) EU membership bid. The erosion of liberties will cause problems for relationships with all Western allies. That Gülen lives in exile in the US and that Ankara has demanded his extradition, will cause particular difficulties for the US-Turkey relationship.

On the other hand, Turkey’s Western allies have only expressed passing concern at the creeping coup started by Erdoğan over the past few years. They have remained silent in the face of the brutal crackdown in the country’s Kurdish south-east. Ankara’s murky relationship with jihadi groups in Syria and its tardy commitment to the struggle against ISIS, has shaken but not broken its Western alignments.

The West has preferred to repeat the mantra of Turkey’s strategic significance in the region and as a NATO member. The coming months and years will test whether there is any line that Turkey cannot cross if it wishes to hold onto its Western friendships. There will be tensions with Western capitals certainly; but should we expect more?

William Park is a senior lecturer at the defence studies department of King’s College London.