He is generally credited with bringing social and economic development to Tunisia, but failing to lay the foundations for Western-style democracy.

Zine El-Abidine Ben Ali, Tunisia’s former long-time president who died in mid-September, will probably be remembered best as the first autocrat to fall during the popular uprisings that spread across the Middle East in early 2011. He ruled Tunisia with an iron fist for 23 years until he fled into exile in Saudi Arabia in January that year. This followed popular and mostly spontaneous and peaceful demonstrations in the country.

What sealed Ben Ali’s fate was the army’s withdrawal of support and its refusal to fire on protesters. By the middle of 2011, a Tunisian court had convicted him and his wife of embezzlement. They were both sentenced, in absentia, to 35 years in prison. In a second trial, he was convicted of smuggling drugs and guns, and sentenced to 15 years in prison.

The spontaneous protests that toppled him first erupted in December 2010. They followed the self-immolation of a young street trader, Mohamed Bouazizi. He was frustrated at constant harassment by local officials that made it impossible for him to earn a living as a street trader, and to support his family.

Rioting quickly spread across the country, with young Tunisians using social media to organise demonstrations. The events in Tunisia were to reverberate across the region, and leave a lasting imprint.

The demonstrators were of all ages. They were demanding an end to corruption, decent jobs and a reduction in economic inequalities as well as an end to political repression.

Ben Ali’s ousting enjoyed wide support. According to a public opinion poll carried out by Arab Barometer in 2011, only 8% of Tunisians thought that his downfall was a loss to the country. And only 12% expressed a preference for a regime like the one he led.

Nevertheless, there are disagreements among Tunisians, Western governments, commentators on the Middle East and academics about what Ben Ali achieved while in power.

Newspaper reports following his death suggest that he has left a mixed legacy. Public opinion in Tunisia remains divided.

He is generally credited with bringing social and economic development to Tunisia, but failing to lay the foundations for Western-style democracy. This, however, does not tell the whole story. It also doesn’t enable us to understand why few, if any foresaw the fall of his regime.

Ben Ali was an army officer and politician who ascended to the Presidency in 1987, after a bloodless “medical coup” – he manoeuvred to have the then incumbent President Habib declared incompetent by reason of senility.

He came to power with a reputation as a hardliner, but promised political and economic reforms. He is widely credited with having introduced neoliberal reforms that brought sustained economic growth, a civil state and progressive gender policies.

Some commentators have argued that these reforms helped prevent Islamic extremists from gaining a foothold in his country.

It is certainly the case that the economy grew under Ben Ali. According to World Bank data, Tunisia enjoyed an average annual growth in GDP per capita of 3.2% between 1987 and 2008. Growth slowed to 2% in 2009 in the wake of the global economic crisis and following the uprisings fell to -3% in 2011. The economy has still not recovered to pre-uprising levels.

But economic growth wasn’t enough. Most Tunisians benefited little. Unemployment remained relatively high at around 15% and youth unemployment at about 30%.

In addition, crony capitalism became firmly embedded, with Ben Ali, his family and close friends as the main beneficiaries of economic policies.

The middle classes resented the growing inequalities and the decline in decent employment. Their educated sons were forced into precarious jobs in the informal sector, and their daughters withdrew from the labour market altogether.

One of the main reasons for the success of the uprising was that the middle and working classes, including the trade unions, came together as a unified force. 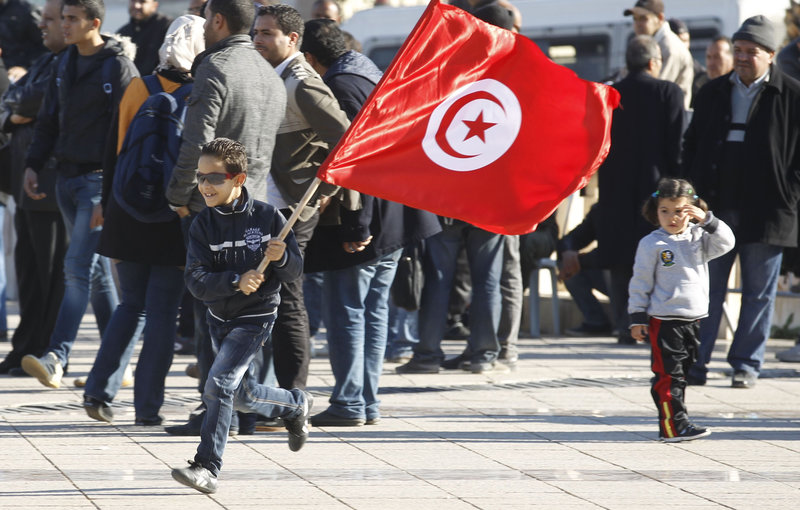 A Tunisian boy waves a flag as he runs at a rally in Tunis, marking the third anniversary of Tunisia’s revolution in December 2013. A prominent member of the group that’s credited with averting civil war in the country says the group acted “to give hope to young people.” Credit: Reuters

Ben Ali’s record on democracy and human rights was even more woeful. The initial reforms allowing political pluralism were quickly abandoned, supposedly because of a need to suppress Islamic extremism. This drove political dissent underground, forcing people to find new ways to express themselves, mainly by mobilising online.

Ben Ali’s attempts to enforce a secular state also backfired, including his attempts to promote gender equality. While the urban elite adopted Western secular lifestyles, the majority of Tunisians, who lived in rural areas, continued to live their lives in ways informed by Arab or Muslim values.

Still not out of the woods

Following the initial euphoria, after he went into exile, Tunisians have become increasingly disillusioned with their government.

In the most recent survey by Arab Barometer in late 2018, 79% of adults thought that government performance was poor, 92% that the state of the economy was bad and 90% that the government was corrupt.

While Tunisians still agree that democracy is the preferable form of government, only 22% think that it is suitable for their country.

Ben Ali’s exile may have stopped a bloodbath as happened in Libya and Syria following uprisings in those countries. But, it has still not ushered in a government that is responsive to its citizens’ demands – including decent jobs, acceptable living standard and an end to corruption.