Woolsey’s hiring contrasted with Trump’s repeated assertions that he was a stalwart opponent of the invasion, although he initially supported it. 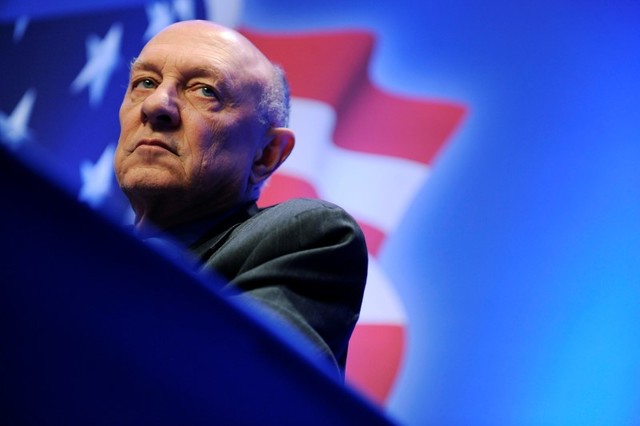 Former director of the US Central Intelligence Agency James Woolsey takes part in a panel discussion on Sharia law at the Conservative Political Action Conference (CPAC) in Washington in this February 12, 2011 file photo. Credit: Reuters/Jonathan Ernst

Woolsey’s hiring contrasted with Trump’s repeated assertions that he was a stalwart opponent of the invasion, although he initially supported it.

In the announcement, Woolsey said he supports Trump’s plan to expand the US military, which calls for ending Pentagon budget caps and spending billions of dollars for additional troops, ships and aircraft.

“Mr. Trump’s commitment to reversing the harmful defence budget cuts signed into law by the current administration, while acknowledging the need for debt reduction, is an essential step toward reinstating the United States’ primacy in the conventional and digital battle space,” Woolsey said.

In an appearance on CNN, however, he called Trump’s plan to temporarily ban Muslims from entering the US “a bad decision.” He also has warned about the threats posed by climate change, something Trump has called a hoax that benefits China.

Woolsey was an outspoken proponent of the Iraq invasion, suggesting that Saddam was hiding nuclear, chemical and biological weapons programmes from UN inspectors. He also promoted the erroneous allegation that the Iraqi dictator backed al Qaida’s September 11, 2001, attacks on the US.

Shortly after former President George W. Bush took office in 2001, Woolsey visited Britain on a defence department trip in a fruitless hunt for evidence that Saddam masterminded the 1993 attack on the World Trade Center in New York. He made a second visit to Britain for the same purpose shortly after September 11 and again came up empty.

At the time of his second trip, Woolsey was a member of the Defense Policy Board, a panel of outside advisers to the defence department that advocated Saddam’s overthrow even in the absence of any evidence of his complicity in 9/11.

The following year, he arranged for the Defense Intelligence Agency to debrief an Iraqi defector who claimed that Iraq had mobile biological-warfare laboratories disguised as yogurt and milk trucks. The man was later determined to be a fabricator.

In 2000, Woolsey briefly served as a corporate officer of a foundation that managed US funding for the Iraqi National Congress, the exile group that produced a series of defectors who peddled false information to bolster the allegations that Saddam was hiding illicit weapons programs. No such weapons or facilities have ever been found.