The US president warned Turkey not to take action in Syria that he considered “off-limits”.

Washington/Istanbul: President Donald Trump on Monday launched a harsh attack on NATO ally Turkey, threatening to destroy its economy if Ankara takes a planned military strike in Syria too far, even though the US leader himself has opened the door for a Turkish incursion.

Trump said he would “totally destroy and obliterate” Turkey’s economy if it took action in Syria that he considered “off limits” following his decision on Sunday to pull 50 American special forces troops from northeastern Syria.

The US withdrawal will leave Kurdish-led forces in Syria that have long allied with Washington vulnerable to a planned incursion by the Turkish military, which brands them terrorists.

Trump’s stern words seemed to be aimed at placating critics who accused him of abandoning the Syrian Kurds by pulling out US forces. The decision drew criticism from Democrats and a rare rebuke from some of Trump’s fellow Republicans in Congress, including senate majority leader Mitch McConnell.

“As I have stated strongly before, and just to reiterate, if Turkey does anything that I, in my great and unmatched wisdom, consider to be off limits, I will totally destroy and obliterate the Economy of Turkey (I’ve done before!)” Trump tweeted.

Turkey does not appear “as of now” to have begun its expected incursion into northern Syria, a senior Trump administration official said on Monday.

The Turkish defence ministry said on Twitter late on Monday that preparations for a possible military operation into northeastern Syria had been completed.

Also Read: US Says ‘No Support’ For Turkish Military Operation in Northeastern Syria

The Trump administration official, briefing reporters on a conference call, said 50 US troops in the region that Turkey has targeted would be redeployed elsewhere in Syria “where they aren’t in the crossfire.” The US has about 1,000 troops in Syria.

Speaking later at the White House, Trump said he had told President Tayyip Erdogan in a phone call that Turkey could suffer the “wrath of an extremely decimated economy” if it acted in Syria in a way that was not humane.

Offering his rationale for the troop redeployment, Trump said his ultimate goal was to fulfill a campaign promise to bring troops home. “We’re like a police force over there. We’re not fighting. We’re policing,” he said.

In Ankara, Erdogan told reporters he planned to visit Washington to meet with Trump in the first half of November. He said the two leaders would discuss plans for a “safe zone” in Syria, and added that he hoped to resolve a dispute over F-35 fighter jets during his visit.

Turkey’s lira slid more than 2% to its lowest level in more than a month against the dollar on Monday over concerns about the planned incursion into northern Syria and Trump’s warning.

Investors have been closely watching tense ties between Ankara and Washington in recent months, with the countries at odds over a range of issues, including Syria and Turkey’s purchase of a Russian missile defence system.

Turkey has repeatedly threatened to attack U.S.-backed Kurdish fighters in northeastern Syria who have links to Kurdish guerrillas operating in Turkey.

The United States began pulling troops back from the northeast Syrian border on Monday, effectively giving Turkey a green light to move into the area.

Earlier on Monday, Trump said the United States should leave others from European allies to Iranian foes, “to figure the situation out” in the region.

He wrote on Twitter that “it is time for us to get out of these ridiculous Endless Wars, many of them tribal, and bring our soldiers home. WE WILL FIGHT WHERE IT IS TO OUR BENEFIT, AND ONLY FIGHT TO WIN. Turkey, Europe, Syria, Iran, Iraq, Russia and the Kurds will now have to figure the situation out.” 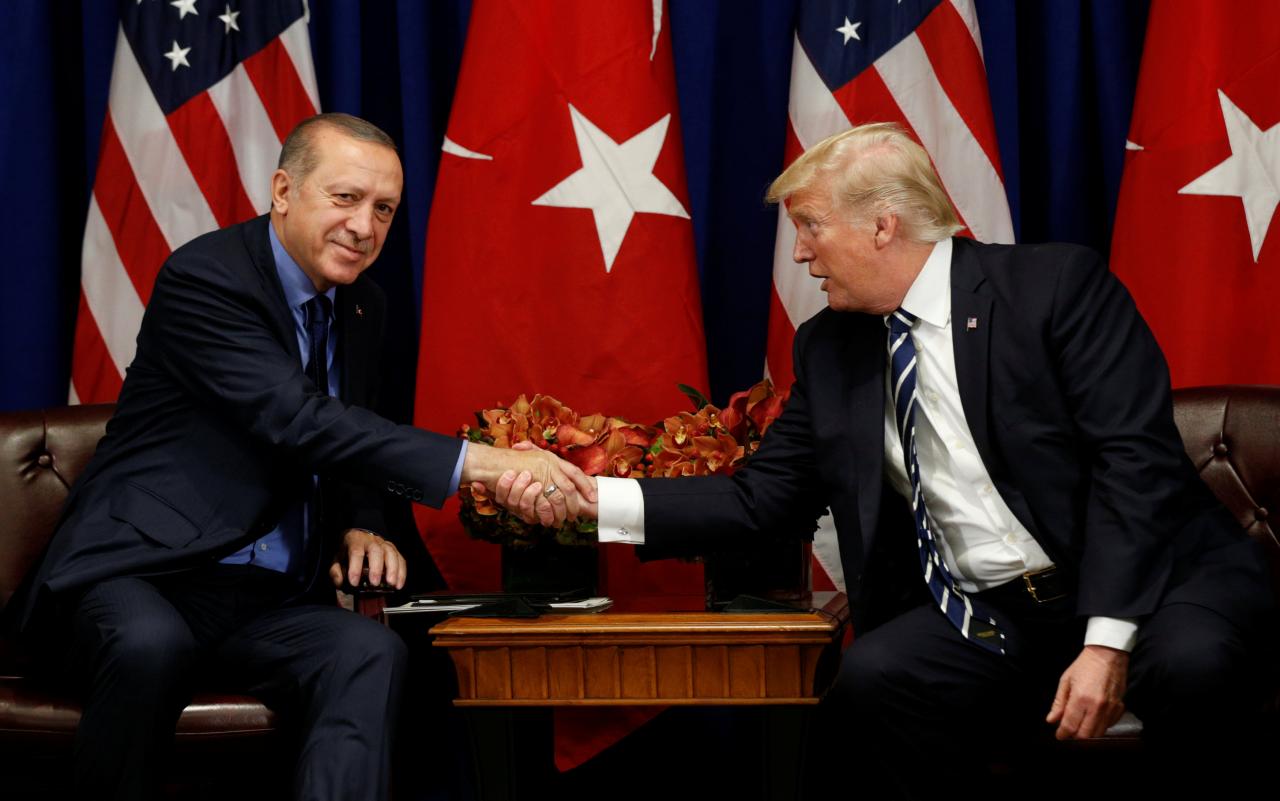 ‘Stab in the back’

It is a major policy shift that was denounced as a “stab in the back” by Kurdish-led forces who have been Washington’s most capable partners in fighting Islamic State in Syria, also known by its acronym ISIS.

US House of Representatives speaker Nancy Pelosi, a Democrat, called on Trump to “reverse this dangerous decision,” saying it betrayed Kurdish allies, threatened regional security and sent a message to Iran and Russia, as well as US allies, that the US is no longer a trusted partner.

McConnell, the Republican senate leader, said in a statement: “A precipitous withdrawal of US forces from Syria would only benefit Russia, Iran, and the Assad regime. And it would increase the risk that ISIS and other terrorist groups regroup.”

Senator Lindsey Graham, a Republican who is close to Trump, called the move “a disaster in the making.”

France warned that the US decision to withdraw from northeastern Syria could open the door to a revival of Islamic State, which has suffered significant battlefield losses to a US-led coalition in the area.

The US expects Turkey to take responsibility for captive Islamic State fighters in northeastern Syria if Ankara’s planned incursion seizes areas where the detained militants are held, a senior State Department official said.

The captives are held in SDF facilities south of a safe zone initially proposed by Turkey.

The official said the US made it clear to Turkey it did not support any incursion.

A US official said Turkey had been removed from a military mechanism used to coordinate air operations over northern Syria and that Turkey would no longer have access to US intelligence and surveillance feeds in the region.