Singapore claims to have nearly eliminated drug use and crime thanks to capital punishment – but the data tells a very different story. 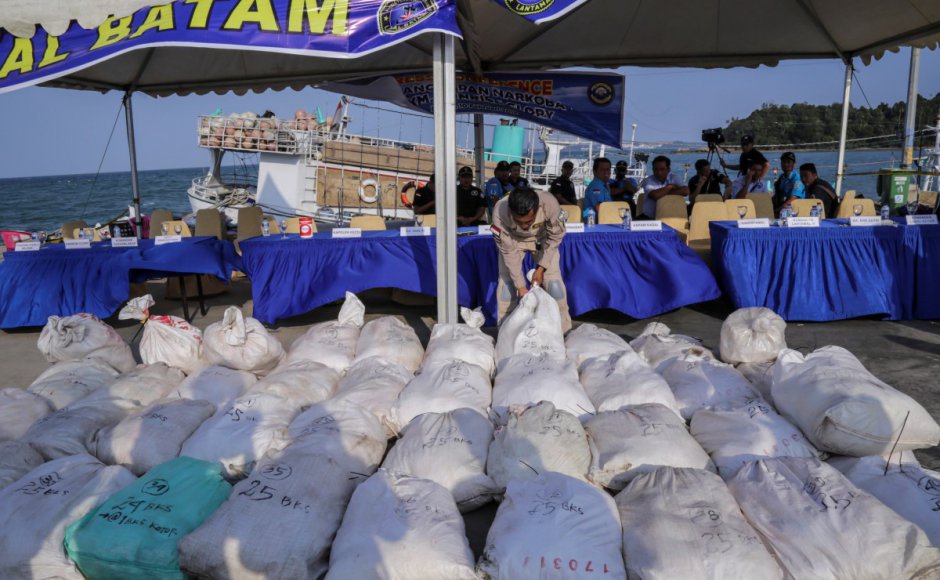 An Indonesian naval officer arranges bags of confiscated crystal meth, part of a one tonne seizure, on a dock in Batam, Riau Islands, Indonesia near Singapore on February 10, 2018. Credit: Antara Foto/M N Kanwa/Reuters

Speaking before the country’s parliament, Singapore’s minister for home affairs, K. Shanmugam, extolled the country’s success in fighting drugs. He attributed these results to Singapore’s harsh drug laws, which include the use of capital punishment.

It may seem surprising to the uninitiated that Singapore has the death penalty for drug crimes. But, as the minister said: “Our penalties are severe because we want to deter such offences”.

Singapore is one of a tiny number of countries classified by Harm Reduction International (HRI) as “high application” states in the use of capital punishment for drugs. This means that death sentences and executions are a regular part of the criminal justice system. Indeed, there have been two executions for drug offences just this month, killings which were condemned by UN human rights officials.

The idea that harsh drug laws such as the death penalty are effective is one actively promoted by Singapore. And it is a belief now allegedly being adopted by US president Donald Trump. Given Trump’s notorious concern with what he considers “fake news”, it is somewhat surprising he has embraced one of the more dubious claims in global drug control – the myth that Singapore’s harsh penalties have nearly eliminated drug use and drug crime.

Singapore consistently claims that it has one of the lowest rates of drug use in the world. Yet the government does not publish reliable data on drug use, making this statement impossible to independently verify.

As far back as 2008, the reference group to the United Nations on HIV and injecting drug use found Singapore to be one of the only countries in Asia without reliable data on rates of drug injecting. More recently in 2016, HRI published its global state of harm reduction, which similarly found almost no reliable data on levels of drug use in Singapore.

Instead, the government typically cites information from the world drug report, published annually by the UN Office on Drugs and Crime (UNODC). However, rather than being independently produced, this report reflects data provided by governments.

This practice – which I have long referred to as data laundering – puts a UN seal of legitimacy on Singaporean government data that is at best unverified, and at worst politically expedient. UNODC admits that the vast disparity in data quality and collection methods between countries “affect the reliability, quality and comparability” of the data in the report, making comparisons between countries of little value.

Even the Singaporean minister’s recent speech did not offer any figures on drug-related crime, sticking instead to a few emotive stories about the “dangers of drugs”. The government’s failure to provide transparent data creates huge doubts about any claims of effectiveness, and raises the question of whether their statements represent anything more than political “spin” to justify controversial drug policies.

The only data Singapore does publish on drug use are figures on what it terms “drug abusers” – people who come into contact with the health or criminal justice system for drug treatment. Given that UNODC estimates the number of people who require treatment globally is only 10% of all people who use drugs, we can see how these government figures (even if accurate) are a dramatic under-representation of levels of drug use in a country.

What about Singapore’s success in reducing drug-related crime? As with data on drug use, published figures on drug-related crime are neither robust nor transparent, again making such claims impossible to independently verify. The annual statistical crime brief published by the Singapore police force does not provide any data on drug-related offences. Nor does the annual report of Singapore’s central narcotics bureau – an odd omission given the bureau’s practice of regularly reporting major trafficking arrests on its website.

This lack of data certainly does not reflect a lack of crime. The government admits 80% of people in prison are drug offenders. This, coupled with the fact that Singapore has the seventh highest rate of incarceration per capita in Asia, does not mesh easily with the government’s claims of low levels of drug-related crime either.

Interestingly, what the narcotics bureau’s 2016 report does show is that seizures of both methamphetamine and cannabis increased by approximately 20% over the previous year, while heroin seizures remain basically level. Hardly indicators of a shrinking drug market.

Clearly the statistics used to promote the Singapore myth either do not exist, or fall apart under scrutiny. As a result, any attempt to use the Singapore model as evidence of the effectiveness of the death penalty for drug offences is ludicrous. Given the unprecedented overdose crisis in the US, Americans deserve an evidence-based response. Pursuing myth-based drug policies will only make the problem worse.