Justice Anthony Kennedy's retirement would give Trump a further chance to shape the Supreme Court, after his first nominee Neil Grouch was sworn in this week. 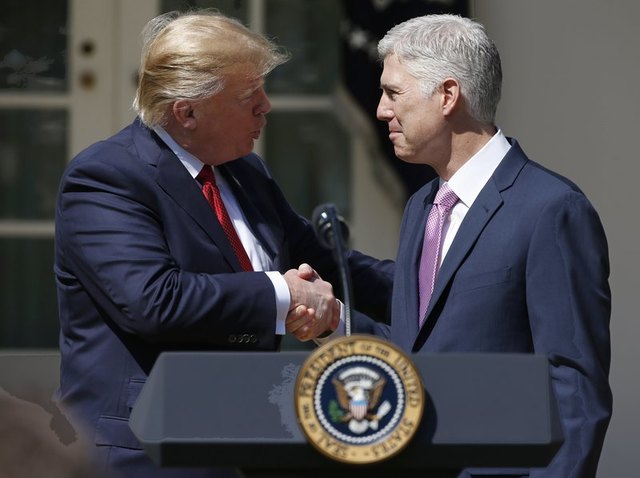 Judge Neil Gorsuch is congratulated by US President Donald J. Trump after being sworn in as an associate justice of the Supreme Court in the Rose Garden of the White House in Washington, US, April 10, 2017. Credit: Reuters/Joshua Roberts

Washington: Democrats thought it was hard to stop President Donald Trump’s first US Supreme Court nominee, it promises to be even tougher for them if he gets to fill another vacancy, potentially to replace the most influential justice, Anthony Kennedy.

Kennedy, a conservative who sometimes sides with the court’s liberals in key cases such as on gay rights and abortion, is one of three justices 78 or older. Justice Stephen Breyer is 78 and fellow liberal Ruth Bader Ginsburg is 84.

Former Kennedy Supreme Court clerks said the justice, who turns 81 in July, may be pondering retirement either this year or in 2018.

That would give Trump a further chance to shape the court after his first nominee, Neil Gorsuch, was sworn in on Monday for the lifetime job to replace the late conservative justice Antonin Scalia after overcoming fierce Democratic opposition in the Senate confirmation process.

Kennedy administered Gorsuch’s judicial oath at a White House ceremony, and Trump heaped praise on a justice who has spent nearly three decades on America’s top court, calling him “a great man of outstanding accomplishment.”

Gorsuch is one of Kennedy former clerks. Kennedy is planning a reunion of his clerks in June rather than next year as had been expected. Kennedy, through a court spokesman, declined to comment on his plans.

The implications for the court if Kennedy were to step down are enormous. For the past decade he been its swing vote in major cases. Gorsuch’s confirmation restored the court’s 5-4 conservative majority. If whenever Kennedy leaves the bench he is replaced by a stalwart conservative, that would move the court further to the right.

Republicans possess a 52-48 majority in the Senate. In order to secure Gorsuch’s confirmation, they voted to prohibit a procedural roadblock called a filibuster that had required a super-majority of 60 votes to allow a confirmation vote for Supreme Court nominees, leaving the minority Democrats with little ammunition for the next nomination fight.

“I think it will be very hard for Democrats to get much traction to derail a future Trump nominee without the threat of a filibuster,” George Washington University political scientist Sarah Binder said.

But Democrats and Republicans still are predicting a fierce fight over the next court vacancy.

“For the life of me I don’t understand why the Democrats made such a fuss about this one. They look stupid,” Republican senator Orrin Hatch said last week of Gorsuch’s nomination. “I expect armageddon on the next one because that’s going to change, assuming Trump gets another one, the direction of the court. It would certainly keep the court in a more conservative mode for a long time.”

A Democratic congressional aide added, “The opposition to Gorsuch could look weak compared to what a similarly conservative nominee would face, if it would tip the balance on the court.”

Kennedy is the longest-serving of the nine justices. He was nominated by Republican President Ronald Reagan in 1987 and confirmed by the Senate in 1988 after Democrats thwarted Reagan’s first choice, outspoken conservative Robert Bork, and his second pick, Douglas Ginsburg, withdrew from consideration.

Although he has sided with his conservative colleagues on many issues, Kennedy has supported liberal causes such as gay rights, culminating in writing the landmark 2015 ruling legalising same-sex marriage nationwide.

He also joined the liberals in upholding abortion rights. In 2016, Kennedy joined the court’s four liberal justices in a ruling striking down a Texas abortion law imposing strict regulations on doctors and facilities in the strongest endorsement of US abortion rights in more than two decades.

He also authored a 2016 ruling upholding the consideration of race in college admissions, joined by the court’s liberals.

University of Georgia School of law professor Lori Ringhand said Republicans may be wary of defending an extremely conservative court nominee with the midterm congressional elections coming up in 2018, if another vacancy arises.

“It’s not clear it would be to the electoral advantage to Republicans to have a hotly contested Supreme Court nomination right before the midterms that highlighted a nominee’s extremely conservative positions on social issues that the majority of the public have actually accepted,” Ringhand said.