Rescue operators said the death toll was 25 on Tuesday evening, but was likely to increase further as several people were seriously injured. 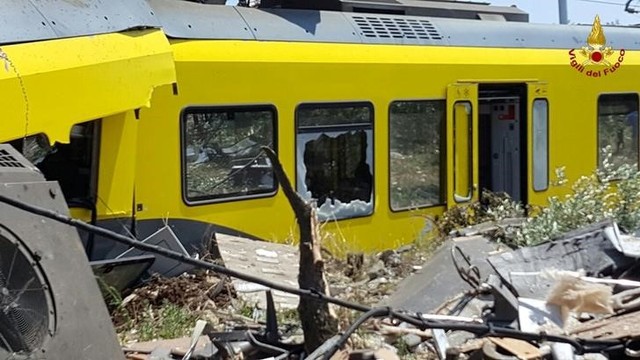 A damaged passenger train is seen after a collision with another in the middle of an olive grove in the southern village of Corato, near Bari, Italy, in this handout picture released by Italian Firefighters July 12, 2016. Italian Firefighters/handout via Reuters

Three carriages were torn apart by the violence of the impact after the two trains hit each other while travelling down the same stretch of track linking the small towns of Corato and Andria in the southeastern Puglia region.

Rescue operators raised the death toll to 25 on Tuesday, July 12 evening after a day of frantic rescue operations and warned that it could climb higher as some of the 50 injured were in serious condition.

There was no immediate indication of what had caused one of Italy‘s worst train disasters in recent years, but the government promised a full and swift investigation.

“Tears and grief for the victims and their families, but also a lot of anger. We demand clarity over what happened in Puglia this morning,” Prime Minister Matteo Renzi said on Twitter, before making his way to the region to meet with rescuers and local politicians.

“We will remain at the side of the people of Puglia in this moment of great pain and desperation,” he said in the evening, adding that transport minister Graziano Delrio would report to parliament on the accident on Wednesday, July 13.

The crash happened at around 11:30 am on a fiercely hot summer’s day.

Both trains were comprised of four carriages. The front carriages on each were pulverised as they slammed into one another. Sky Italia TV said one of the drivers had died, with no word yet about the fate of the other one.

“It looks like there has been a plane crash,” said the mayor of Corato, Massimo Mazzilli.

Rescue services parked their ambulances and fire trucks among the olive trees and set up a field hospital to treat the injured. The sound of crickets rang out as the first bodies were extracted from the site in metal caskets.

“I dug through the wreckage and managed to save my husband. But I saw people cut to pieces,” said an elderly woman standing alongside her husband, whose head was swathed in bandages. Another survivor said he was thrown to the floor by the impact. “When I got up, I saw hellish scenes around me.”

Kicking up clouds of dust, helicopters landed in a nearby field to pick up the most seriously injured.

It was not clear how many people had been on the trains at the time of the collision. By mid-afternoon a giant crane had arrived at the scene to start lifting the smashed carriages to see if any bodies were trapped under the wreckage.

The stretch of track is operated by a small, private rail company Ferrotramviaria. Italian media said the EU had earmarked funds to build a second track along the route but that the work had been delayed.

The last major rail disaster in Italy was in 2009 when a freight train derailed in Viareggio, in the centre of the country, and more than 30 people living close to the tracks died in the subsequent fire.