Anti-government protests have rocked the former British colony since June, at times forcing government offices, businesses, schools and even the international airport to shut. 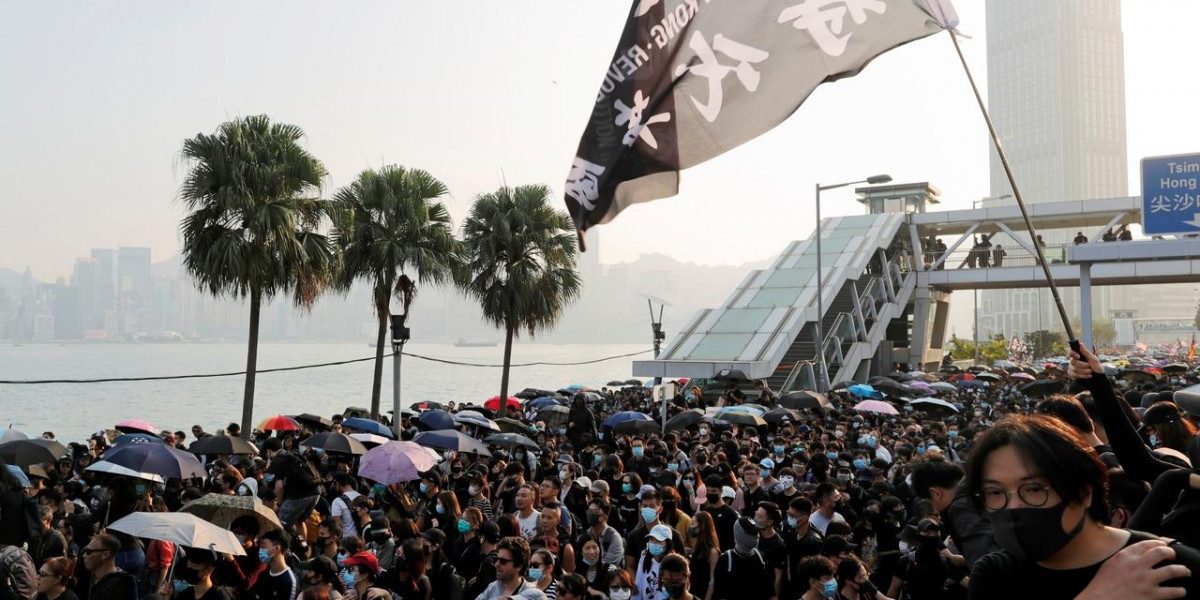 Hong Kong: After a week of relative calm, thousands of anti-government protesters, including many elderly residents, took to the streets of Hong Kong on Sunday chanting “revolution of our time” and “liberate Hong Kong.”

The protest, which took place in the bustling shopping district of Tsim Tsa Tsui, came after hundreds of people had marched to the U.S. consulate to show “gratitude” for U.S. support for the demonstrations that have roiled the China-ruled financial hub for nearly six months.

Waving posters that read “Never forget why you started” and black flags with the logo “Revolution now”, protesters marched past the city’s Kowloon waterfront, home to luxury hotels and shopping malls.

There has been relative calm in Hong Kong for the past week since local elections last Sunday delivered an overwhelming victory to pro-democracy candidates.

However, activists have pledged to maintain the momentum of the movement with three marches on Sunday.

Anti-government protests have rocked the former British colony since June, at times forcing government offices, businesses, schools and even the international airport to shut.

“We had demonstrations, peaceful protests, lobbying inside the council, a lot of things we have done but they all failed,” said Felix, a 25 year old university graduate.

“There are still five demands,” he said, referring to protesters’ calls that include an independent inquiry into police behavior and the implementation of universal suffrage.

Young protesters and families with children filled the nearby streets as scores of riot police patrolled the area. Protesters, some with gas masks and backpacks, headed towards Hung Hom, a district near the ruined campus of Hong Kong Polytechnic University.

The campus turned into a battleground in mid-November when protesters barricaded themselves in and faced off riot police in violent clashes of petrol bombs, water cannon and tear gas.

About 1,100 people were arrested last week, some while trying to escape.

On Friday, police withdrew from the university after collecting evidence and removing dangerous items including thousands of petrol bombs, arrows and chemicals which had been strewn around the site.

Earlier in the day hundreds of protesters waved American flags, with some donning Donald Trump logo hats and t-shirts, as they unfurled a banner depicting the U.S. president standing astride a tank with a U.S. flag behind him.

Trump this week signed into law congressional legislation that supported protesters in the China-ruled city, despite angry objections from Beijing.

“Thank you President Trump for your big gift to Hong Kong and God bless America,” shouted a speaker holding a microphone as he addressed a crowd at the start of the march.

In the morning, hundreds of protesters, including many families with children, marched in protest against police use of tear gas.

Carrying yellow balloons and waving banners that read “No tear gas, save our children”, the protesters streamed through the city’s central business district towards government headquarters on the main Hong Kong island.

“We want the police to stop using tear gas,” said a woman surnamed Wong, who marched with her husband and five year old son.

“It’s not a good way to solve the problem. The government needs to listen to the people. It is ridiculous.”

Police have fired around 10,000 rounds of tear gas since June, the city’s Secretary for Security, John Lee, said this week.

Sunday’s marches came as a top Hong Kong official said the government was looking into setting up an independent committee to review the handling of the crisis, in which demonstrations have become increasingly violent.

The protesters in Hong Kong are angry at what they see as Chinese meddling in the freedoms promised to the former British colony when it returned to Chinese rule in 1997.

China denies interfering and says it is committed to the “one country, two systems” formula put in place at that time and has blamed foreign forces for fomenting unrest.

On Saturday, secondary school students and retirees joined forces to protest against what they called police brutality and unlawful arrests.

While Saturday’s rallies were mostly peaceful, public broadcaster RTHK reported that police fired tear gas and rubber bullets to disperse protesters after a vigil outside the Prince Edward metro station. Some residents believe that some protesters were killed by police there three months ago. Police have denied that account.

Further protests are planned through the week and a big test of support for the anti-government campaign is expected on December 8 with a rally planned by Civil Human Rights Front, the group that organized million-strong marches in June.