Thousands Protest Against Trump In US Cities

The demonstrations since the election have been impromptu affairs, quickly organised, with weekend protests expected to swell in size. 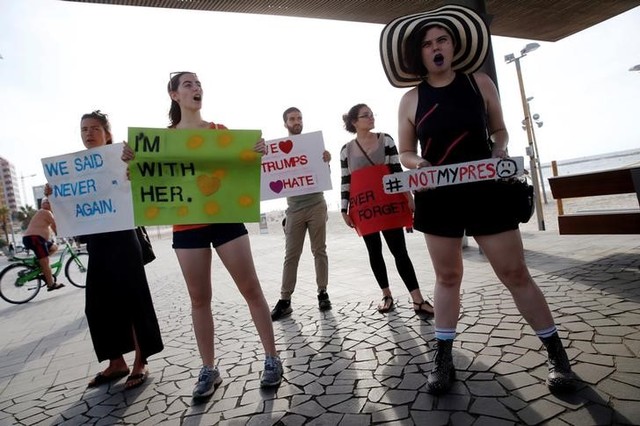 Demonstrators hold placards as they protest following the election of Republican Donald Trump as President of the United States in front of the US embassy in Tel Aviv, Israel November 11, 2016. Credit: Reuters/Baz Ratner

New York/Los Angeles: Chanting “Not my president” and “love trumps hate,” thousands of demonstrators took the streets in cities across the US at the weekend to protest against US President-elect Donald Trump, who they say threatens their civil and human rights.

Police in Portland, Oregon, where a protester was shot early on Saturday but not seriously injured, said they arrested more than 20 people late on Saturday after protesters tossed burning flares and bottles at them and refused orders to disperse.

The biggest rallies were in New York, Los Angeles and Chicago, where organisers said they wanted to build on the momentum after several nights of protests triggered by the real-estate mogul’s surprise win in Tuesday’s presidential election.

In New York, several thousand protesters marched peacefully up Fifth Avenue past its glitzy store fronts, some already bearing Christmas decorations, before filling the streets at the foot of Trump Tower, the president-elect’s skyscraper home.

“We’re horrified the country has elected an incredibly unqualified, misogynist, racist on a platform that was just totally hateful,” said Mary Florin-McBride, 62, a retired banker from New York who held a sign reading, “No Fascism in America.”

There were also demonstrations in Chicago and Los Angeles, where several thousand protesters gathered beneath MacArthur Park’s palm trees holding placards including “Dump Trump” and “Minorities Matter,” before marching toward downtown.

Evelyne Werzola, 46, an immigrant from South Africa, said she had seen what a police state could do.

“I’ve seen people oppressed. And this is like a heartbreak of the American dream for me,” Werzola said. “So I’m fighting to keep what America has stood for alive.”

In Portland, the protester who was shot had been taking part in a march across the city’s Morrison Bridge. Portland police said four people had been detained in connection with the shooting, and were believed to be criminal gang associates.

Police also said some protesters attacked a film crew in the city on Saturday night and at least two people were assaulted. They began making arrests when the crowd refused to disperse.

Since Trump’s victory, demonstrators in several cities have decried the Republican’s campaign promises to restrict immigration and register Muslims, as well as allegations that the former reality-TV star sexually abused women.

Dozens of protesters have been arrested and a handful of police injured.

The demonstrations since the election have been impromptu affairs, quickly organised, with weekend protests expected to swell in size.

Trump initially denounced the protests, saying they were “incited” by media, but later praised the demonstrators’ “passion for our great country.”

“We will all come together and be proud!” he said on Twitter.

Many voters were shocked by the outcome, after polls predicted a Clinton victory.

Some 60.3 million people voted for Trump, fewer than the 60.8 million who chose Clinton. But Trump’s strong showing in swing states including Michigan meant he triumphed in the Electoral College which ultimately picks the president.