The government, several unions and opposition politicians called on protesters to stay off the streets on Saturday, after four people were killed in a gun attack at a Christmas market in Strasbourg. 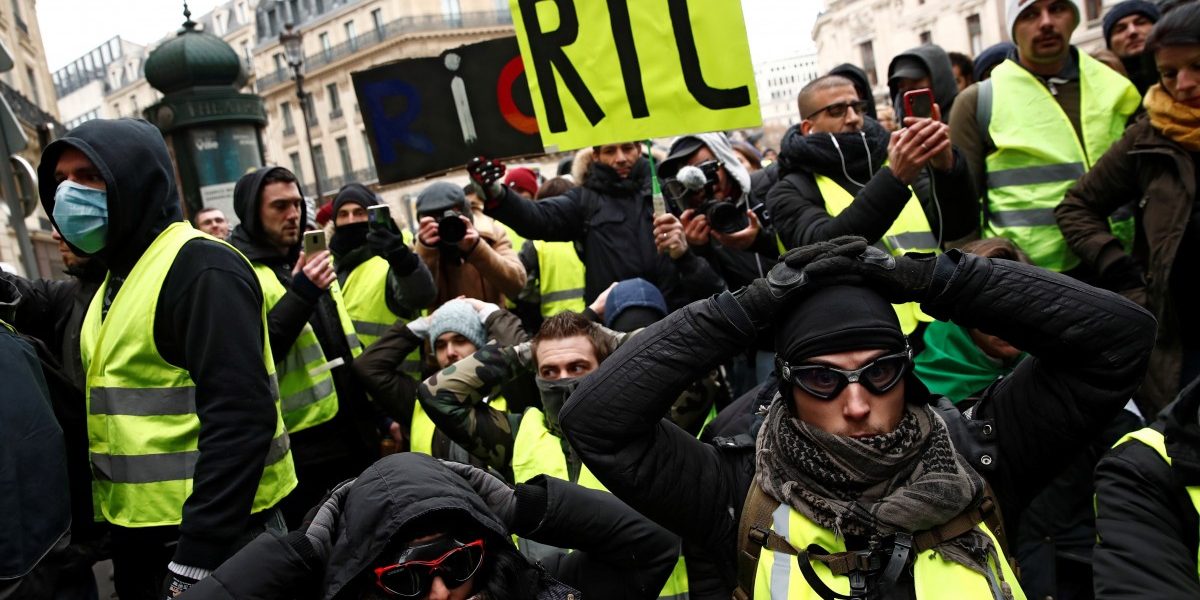 Protesters wearing yellow vests kneel on the street as they gather in front of the Opera House as part of the "yellow vests" movement in Paris, France, December 15, 2018. Credit: REUTERS/Christian Hartmann

Paris: Thousands of protesters took to the streets of French cities on Saturday in the fifth weekend of nationwide demonstrations against Emmanuel Macron’s government, despite calls to hold off after a shooting in Strasbourg earlier this week.

In Paris, police were out in force to contain possible outbursts of violence. But several major stores, such as the Galeries Lafayette, were open to welcome Christmas shoppers.

On the Champs-Elysees, a handful of topless activists from the feminist protest group Femen faced security forces a few meters away from the Elysee Palace, the president’s residence.

The interior minister said around 69,000 police officers were active on Saturday with a reinforced presence in the cities of Toulouse, Bordeaux and Saint-Etienne.

On Friday, President Macron called for a return to calm in France after nearly a month of protests by the so-called ‘yellow vest’ movement against his government’s policies. The demonstrations have hit growth and caused widespread disruption.

Also Read: The Paris Unrest Has Spread Panic in the Corridors of Power

“France needs calm, order and a return to normal,” Macron said, after a meeting of European Union leaders in Brussels.

The ‘yellow vest’ movement started in mid-November with protests at junctions and roundabouts against fuel tax increases, but quickly became a wider mobilisation against Macron’s economic policies.

Successive weekends of protests in Paris have led to vandalism and violent clashes with security forces.

In a televised address to the nation on Monday, Macron announced wage rises for the poorest workers and tax cuts for pensioners in further concessions meant to end the movement but many said they would maintain pressure.

The government, as well as several unions and opposition politicians also called on protesters to stay off the streets on Saturday, after four people were killed in a gun attack at a Christmas market in the historic city of Strasbourg.