War Games, Slow Trains and the Spectre of a Trump-Kim Summit

Kim Jong-un's surprise recent visit to Beijing and Xi Jinping was an awkward get-together that didn't address the elephant in the room – Kim's possible face-to-face meeting soon with Donald Trump. 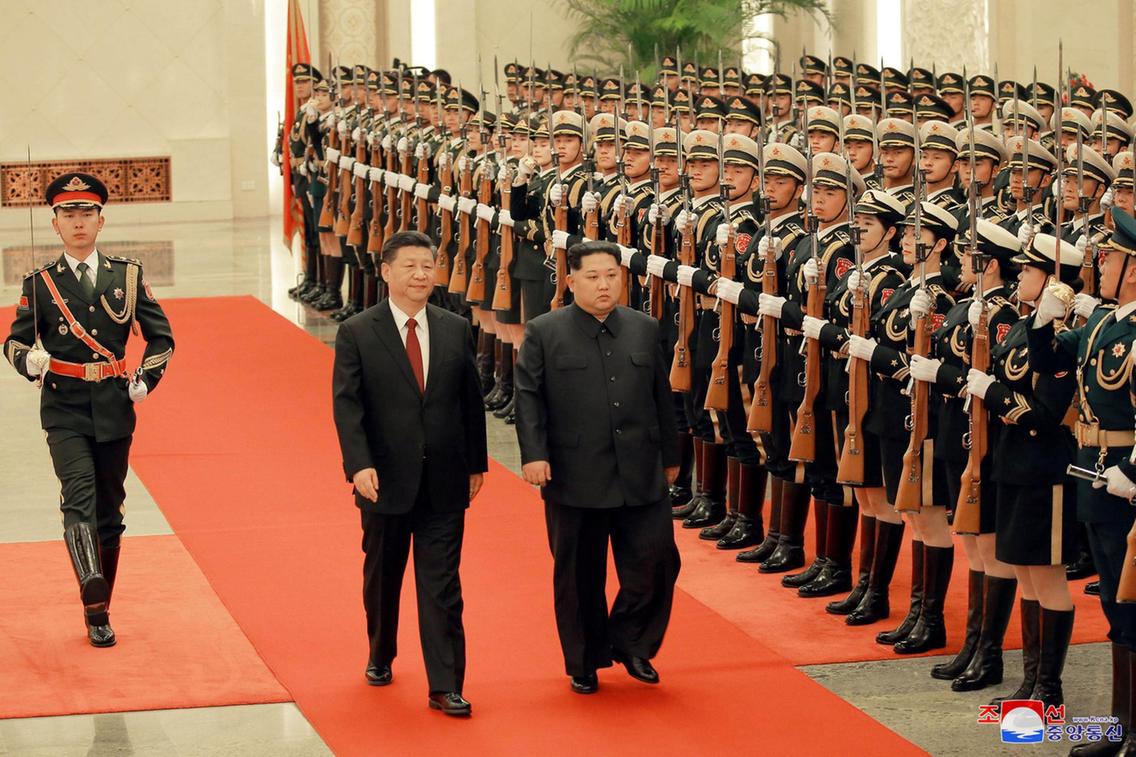 The massive annual US-South Korea joint military exercise kicked off in full force earlier this month after having been delayed to avoid complicating the Winter Olympics in Pyeongchang.

North Korea normally condemns the manoeuvres as war-mongering, but has been quiet this year during the month-long exercise, perhaps because of its own latest move in the Korean Peninsula chess game.

In late March, North Korean leader Kim Jong-un made his first foreign trip since taking power in 2011, a surprise visit to Beijing to meet Xi Jinping, the Chinese Communist Party general secretary. Because Kim shares his father’s fear of flying in foreign airspace, he went by train — one so heavily armoured it barely does 60 km/h.

Fortunately for Kim, it also reportedly comes stocked with lobster, fine wines and young women who sing and dance to bide the time.

China’s Xinhua News Agency called the visit Kim’s “obligation to come to congratulate Xi in person” over being re-elected Chinese president and Central Military Commission chairman. Xi thanked Kim for his “profound revolutionary friendship” and urged that, in future, they pay “frequent calls on each other, like relatives.”

Xinhua also reported that “the Korean Peninsula situation is developing rapidly, and many important changes have taken place, Kim said, adding that he felt he should come in time to inform Comrade General Secretary Xi Jinping in person (of) the situation out of comradeship and moral responsibility.”

Elephant in the room

Judging by the body language in the Chinese and Korean media coverage, it was an awkward get-together. The elephant in the room is Donald Trump, and his off-the-cuff bombshell that he would meet directly with Kim Jong-un, possibly as soon as next month.

It’s not just China who is alarmed by this prospect.

Japan worries that the negotiations will fail because Trump won’t go for North Korea’s expected demand to resolve tensions with the U.S. through synchronous reciprocal concessions — the proposal to implement phased-in, step-by-step mutual pullbacks over a long period.

Japan’s concern is that the North is again just playing for time to refine its ability to prove that, if push comes to shove, it can aim nuclear warheads at American cities.

Once North Korea’s nuclear threat to America is confirmed, Japan would rightly doubt that the US would fulfil its commitment to the defence of Japan if that meant that North Korea could retaliate by blowing up a US city.

Bolton has said talks with North Korea are useless, and protecting the U.S. from North Korean missiles is Job No. 1, regardless of collateral consequences for the South, Japan or, for that matter, China and Russia.With uber-hawk John Bolton the new National Security Adviser, the Japanese fear is that if the Kim-Trump summit fails, the next step will be war.

Beijing’s main concern may be that talks between Kim and Trump actually succeed. China’s original strategy with North Korea was evidently to let a massive crisis develop, engendered by Pyongyang’s weapons program.

China would then resolve it by engineering regime change in the North — if the US withdraws its troops from Japan and South Korea, and abandons its defence of Taiwan.

But it appears that not everything has gone according to Beijing’s plan. Kim Jong-un outflanked China by publicly arresting his secretly China-friendly scheming uncle at a Communist Party meeting in 2013, then executing him and his cronies by rocket launcher as hundreds watched.

Then Kim had his own estranged older brother murdered in Malaysia, eliminating any possibility the sibling could ever become the face of a North Korean Chinese puppet regime.

So little wonder the smiles looked strained in official photos when the two met last week, and Xinhua characterized the talks as “candid.”

A potential blow to China

Of course, if Trump and Bolton find a way forward with Kim to de-nuclearize the Korean Peninsula, and set the stage for eventual Korean reunification, then Trump will have succeeded richly where Presidents Clinton, Bush and Obama failed dismally.

Trump pulling this off without Beijing’s help would debase China’s international prestige, while the U.S. re-consolidates its position in East Asia with no doubts about its future role there. Such a blow to China’s national pride would have major global consequences.

But it’s worth noting that the North Korean account of the Kim-Xi meeting made no mention of plans for the Supreme Leader to meet Trump. This week, North Korea’s official newswire, KCNA, revealed that Kim had mentioned the “development of the north-south relations at present and the prospect of the DPRK-U.S. dialogue” at a meeting of his party officials. But this does not rule out the possibility that the whole U.S. summit idea may just be a feint on Pyongyang’s part.

And — knowing Trump’s temperament as we do — the cause of global stability may well be better served if a Kim-Trump mano-a-mano never happened at all.

Nevertheless, the North Korean regime’s threat to world peace festers dangerously and calls for meaningful action — sooner rather than later.