House demolitions in Palestine are nothing new, but the erasure of entire communities is the new fashion cheerfully adopted by the government, the civil administration and even the courts. "Together we try to assess the odds:  tomorrow is Friday, it’s unlikely, isn’t it, that they’ll demolish the village on the day of prayer." Credit: Yigal Bronner

Days of judgment, bein keseh le-asor, between Rosh Hashana and Yom Kippur. Thick time. Heavy time. We spend the night in al-Khan al-Ahmar, which has already been judged. In an act of moral cowardice to a degree rare even by Israeli standards, the high court removed the last legal impediments to the demolition of this Bedouin village and the violent expulsion of its people (some 200 in all). Judgment having been rendered, they await the execution. The army bulldozers could come at any moment.

House demolitions in Palestine are nothing new, but the erasure of entire communities is the new fashion cheerfully adopted by the government, the civil administration, even the courts. Al-Khan al-Ahmar sits mostly on privately owned Palestinian land, but the judges decided that this fact is “no longer relevant.” The people are to be transferred to a site that sits astride the Jerusalem dump at Abu Dis. 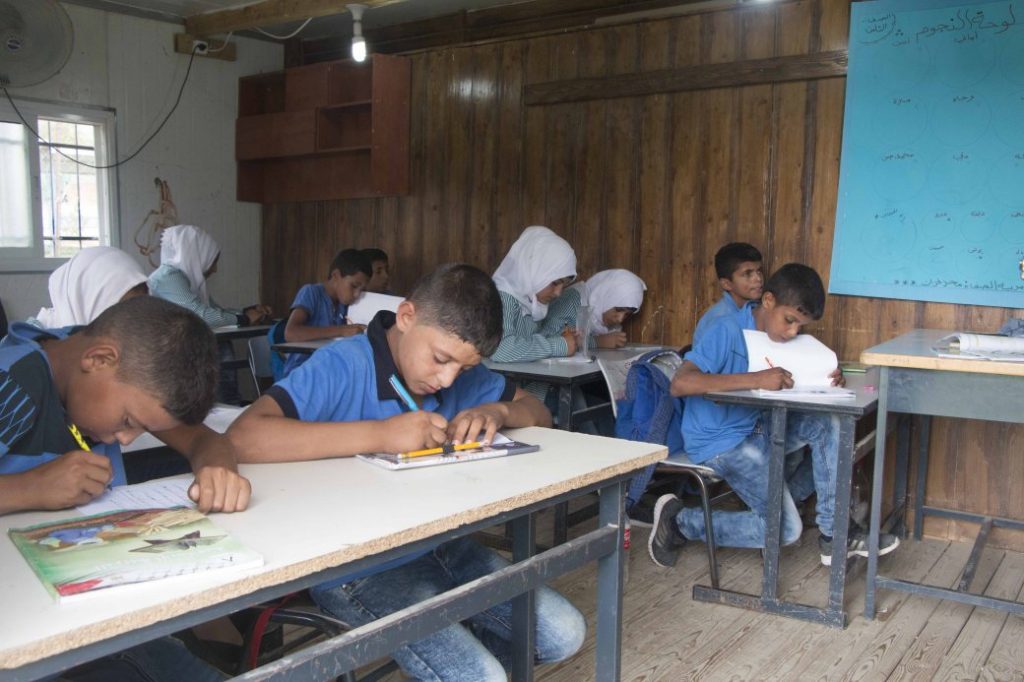 A poster in black-and-red letters glows on the wall of the tent: “Education is resistance.” Credit: Palestinian Monitor

We have activists with them round the clock. Not that they could stop the bulldozers when they come. They are there to be with the innocents in their hour of sorrow. They are there, too, to witness and to record, for the sake of some luckier generation to come. We drive through darkness. I am wondering if crimes of extraordinary cruelty committed during the days of repentance are more harshly punished than those carried out in ordinary time. Perhaps there is no such thing as ordinary time. Perhaps there is no punitive god. “Look what it’s come to,” Yigal says as we descend into the wadi that will take us to the site. Night in the desert: good desert smells. Far away, jackals howl. Police are parked on the side of the road. Arik says we can either follow the goat path, which is shorter but also rather precarious, or take the longer route along the wadi and under the highway. We vote for the goat path. But before we have taken more than a few steps, an ambulance-minivan turns up, packed with Palestinians. They offer us a lift, and somehow the van stretches and expands to allow the three of us in. Inside, we notice that the atmosphere is very far from the gloom we are carrying. It’s more like going to a late-night party. 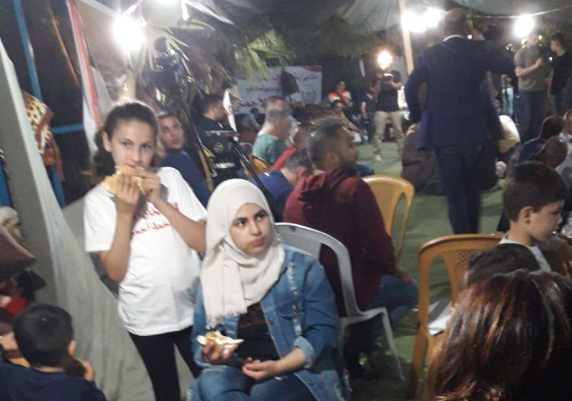 “We notice that the atmosphere is very far from the gloom we are carrying. It’s more like going to a late-night party.” Credit: David Shulman

The big tent is packed with people. They have come from all the corners of Palestine, from Nablus and Twaneh and Ramallah and beyond. I don’t think I’ve ever seen such a show of solidarity. There must be two hundred or more in the tent, including the Israeli activists from Jerusalem and Tel Aviv. Yossi greets us. The Nablus people are distributing those special Nablus sweets. A poster in black-and-red letters glows on the wall of the tent: “Education is resistance.” Al-Khan al-Ahmar, you will remember, has built a beautiful school out of mud and tires. It, too, awaits execution. Strange, more than strange, this unexpected happiness that flows in waves and eddies. I’m not prepared for it. I don’t understand it, but why bother with understanding? Isn’t it enough to feel it slowly begin swirling in me? People greet us, grasp our hands, some embrace us. “Thank you for coming.” A blessing, at once deep and nonchalant. A lightness. “I’m from Ramallah, where are you from?” “Al-Quds.” “East or West?” “West.” “Welcome. Thank you for coming.” 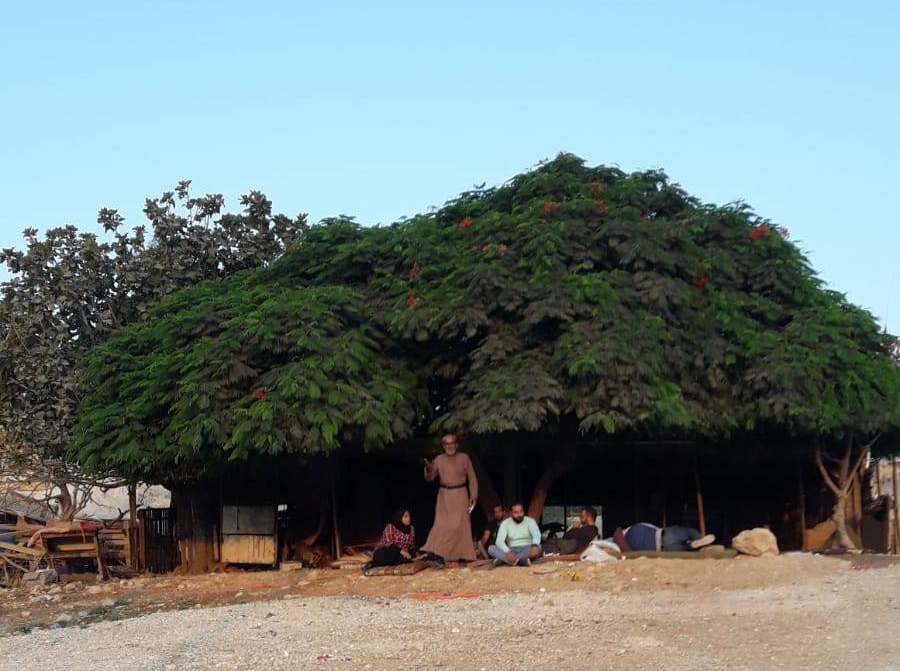 People greet us, grasp our hands, some embrace us. “Thank you for coming.” A blessing, at once deep and nonchalant. Credit: David Shulman

After a while they bring food, plastic bags heavy with fresh pita, plates of white cheese, tomatoes, cucumbers, olives, hummus, canned meat. Again and again they urge us to eat. We are their honored guests. We sit on the floor, taste the pita and cheese and olive oil. Women and men mingle freely – this, too, is a little strange. Something has let go. Together we try to assess the odds: tomorrow is Friday, it’s unlikely, isn’t it, that they’ll demolish the village on the day of prayer. No, they may do it on Friday because the kids are not in school. Or simply to sharpen the torment. “You know,” someone says, “there’s betting going on. You place your bet on which day it will happen.” “Where’s the bookie?” “Over there” – just outside the tent, under the dark acacia tree. 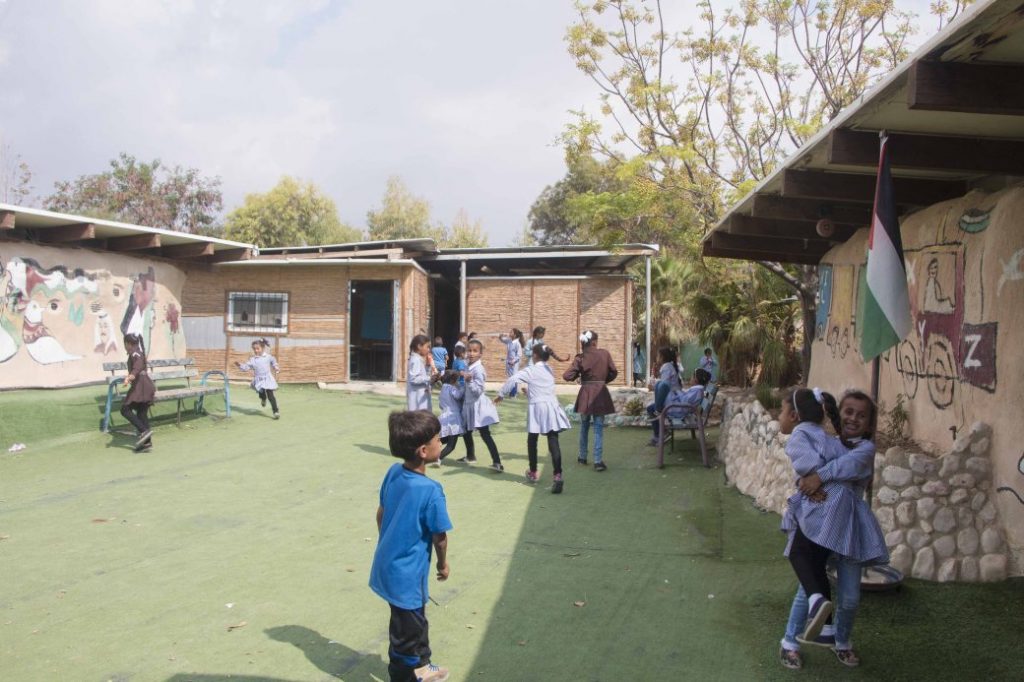 Al-Khan al-Ahmar has built a beautiful school out of mud and tires. It, too, awaits execution. Credit: Palestinian Monitor

A young man from Nablus comes over to us, introduces himself, but I can’t catch the name. He has much to say to us, in a crisp, slow Arabic. If only I had the presence of mind to record him. But it isn’t so much the content of his words as something arresting in the tone. “We thank you,” he says. “We know you, like us, are for peace. You are against Netanyahu, against the new Law of the Nation, against racism and violence and expulsion and discrimination and the Occupation that has lasted for decades. We are alike, you and me. We go a long way back, we have a history of many centuries, once there were Canaanites and Jews, now we, you and me, are their descendants. We want to live together. Everyone wants freedom, and we too want to be free. What Netanyahu is doing only creates hatred and grief. It cannot work. He will fail. One day we will be free.” “Min tumak lebab al-sama’,” I say: “From your mouth to the gates of heaven.” There he is again, still waiting, that non-punitive god. 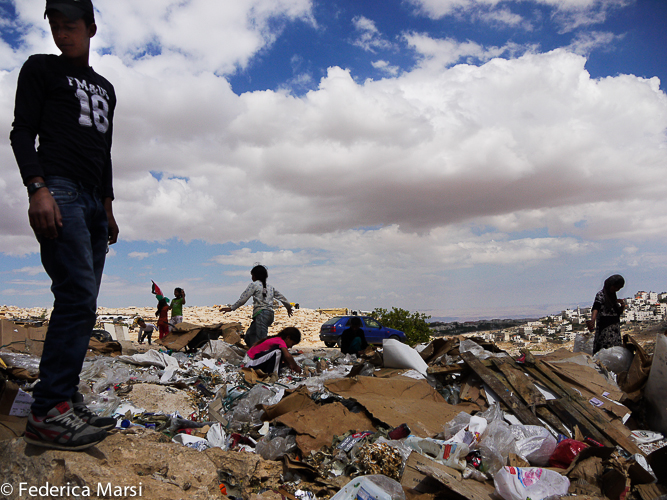 Little by little, he tells us his story. “I was in prison for four years. I was shot at a demonstration, I took a bullet in my thigh. I ask myself what the Israeli soldier is thinking. Why does he shoot if he sees a young boy holding a flag? Doesn’t he know? Doesn’t he understand that he is hurting himself even more than he hurts me? What do the Israeli people think? Do they think they can force us to go away? Nothing can make us go away. We are here. Together with you.” “And you’re not afraid, are you?” I say, though it’s obvious. “No,” he says. Never. We are never afraid. We believe in justice, ‘adl. In the end, justice will win.” His voice is free of bitterness: gentle; musical; firm. He tells us he’s doing a degree in gender studies at Al-Najah University. After some time, he thanks us again, this time rather formally, with the ancient words of courtesy, and takes his leave. 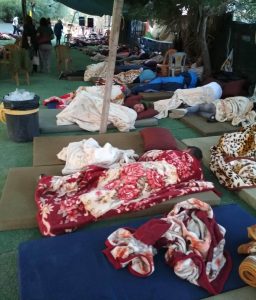 Last night, we are told, people went on talking and drinking coffee and smoking narghilehs until 3 AM. Credit: David Shulman

By now it is past midnight, and the party shows no sign of abating. Last night, we are told, people went on talking and drinking coffee and smoking narghilehs until 3 AM. The tent is stacked high with mattresses and blankets. Around 1 am, I take a mattress and go outside to search for a place to sleep. It’s not cold, the air is good, I can see the stars. But it’s hard to find a place on the rocky hillside. Finally Yigal and I and a few others take our mattresses to the level ground of the schoolyard.

But I can’t sleep. I watch the stars spinning, laughing, receding. The generator rasps out its steady rhythm. From inside the tent, and from little groups standing on the slope, comes the murmur of many voices. More laughter. By now it makes sense to me. I know this, the joy of the night before day, before violence. I feel the release. It’s a marvel. These people are insouciant, effervescent, assured. They can’t be cowed. They have been hurt, insulted, terrorised by the state, soldiers, police, judges, the whole evil lot, and their future is as obscure and as tenuous as futures must be. More tenuous than most. What is certain is that they will be hurt again, and then again. Soon they will be dumped on the dump. Maybe the absence of an intelligible, ordinary future has unleashed in them a new kind of time, a present moment that for now, for tonight, is happiness enough. A thick and infinite moment of lightness. Maybe the paradox makes them laugh. The more the Jews hurt them, the freer these Bedouin are. Fear falls away. If the bulldozers come tomorrow, some will be beaten and wounded, some will be arrested, there will be scenes of rage, the police and soldiers will act like savages. That much is certain. Everyone knows it. And tonight we have joy flecked with love, utterly unlike the other kind of joy. 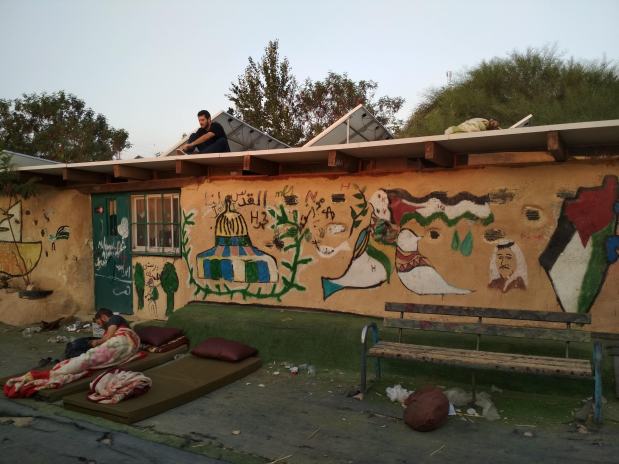 The more the Jews hurt them, the freer these Bedouin are. Fear falls away. Credit: Yagil Bronner

Somehow, after an hour or two, I fall asleep, and at 5 am, when light slips in from the east, across the river, I wake from a dream. Nothing is left of the dream. The donkey tied to a tree just four or five yards away is stirring. Al-Khan al-Ahmar still stands. Slowly people rise from the cots. Some are drinking fresh coffee in tiny paper cups. Death, said Kalidasa, the great Sanskrit poet, is natural, the default of being. It is life that constitutes an aberration. That we go on breathing minute after minute is the miracle.

Note: A few hours after we left al-Khan al-Ahmar, the army bulldozers showed up and began to seal off the two or three remaining dirt tracks that are the last access routes to the site. Six Palestinians were arrested. It seems that the final act in this sordid drama of dispossession will happen very soon. The army bulldozers showed up and began to seal off the two or three remaining dirt tracks that are the last access routes to the site. Six Palestinians were arrested. Credit: Tariq Hathaleen, photographer unidentified

David Shulman is an Indologist and an authority on the languages of India. A Professor Emeritus at the Hebrew University of Jerusalem, he is an activist in Ta’ayush, Arab-Jewish Partnership. His latest book is More Than Real: A History of the Imagination in South India  , published in April 2015.

These notes aim to bear witness at what we, in Ta’ayush – Arab-Jewish Partnership –  see and experience week after week in the Occupied Territories, mostly in the south Hebron hills where we have long-standing ties with the Palestinian herders and farmers. They provide a fairly typical picture of life under the Occupation and of the efforts of Israeli-Palestinian peace groups to protest, to protect the innocent civilian population in the territories, and to keep alive hope for a peace that someday must come. The entries are personal and somewhat introspective, an attempt to make sense for myself of what I see.