The Forgotten Humanitarian Crisis in the Balkans

Sluggish economies, stagnant political structures and no real insight into causes of the conflicts have all created a cesspool of confusion among the young who should be taking their nations into the future. 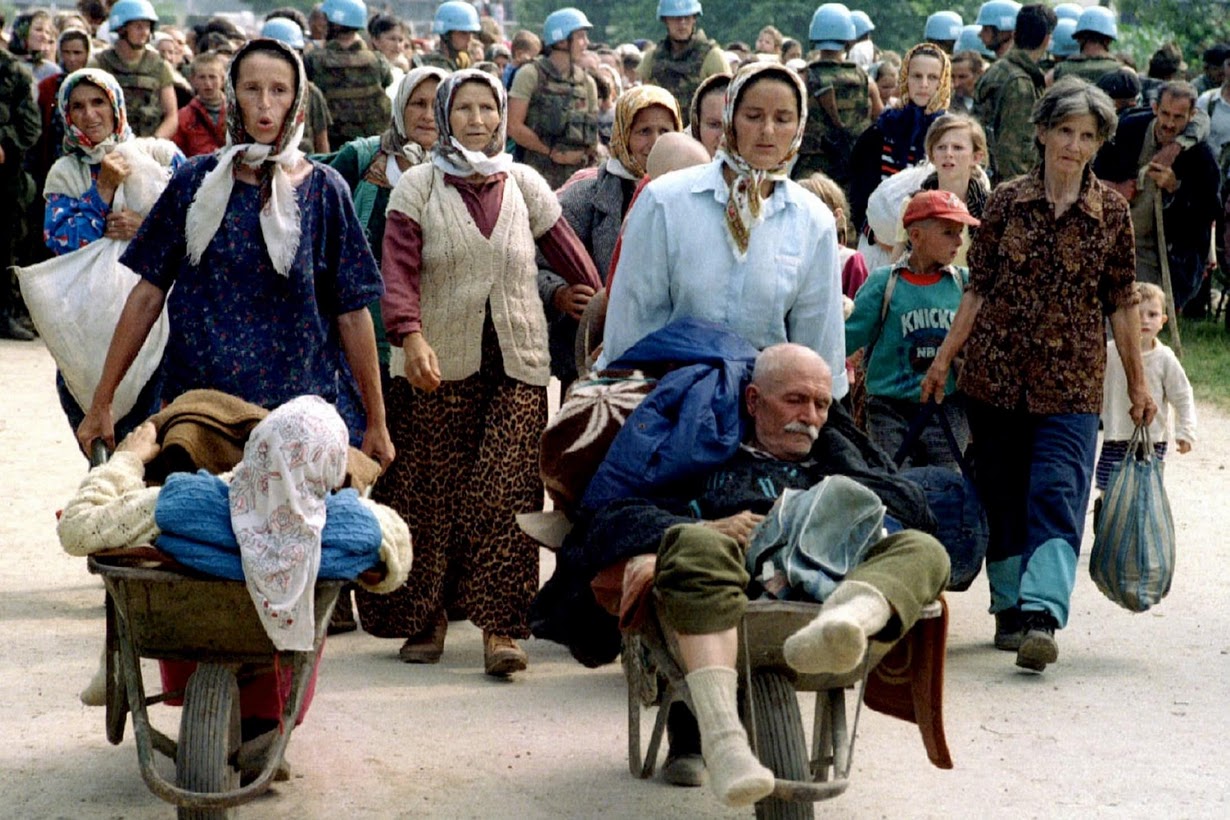 A group of Bosnian Muslims, refugees from Srebrenica, make their way to be transported from eastern Bosnian village of Potocari to Kladanj near Olovo, 13 Jul 1995. Credit: Reuters

Belgrade: The violent split up of former Yugoslavia is more than two decades old. Peace was established in the region back in the 1990s. However, to those who don’t know much about the brutal violence and humanitarian disaster that accompanied the political breakup, little would appear to have changed.

“There is no more arms rattling, but the political rhetoric and lack of profound economic recovery keep people stuck in recent past, with poor view on better future,” prominent sociology professor Ratko Bozovic says. “There are new generations all over the former Yugoslavia who know nothing else but how this or that war was fought.”

The professor explained that no real insight into causes, accompanied by little perspective, creates a fertile ground for confusion among the young who should take their nations into the future.

“Many political structures created during the wars, and surviving until today, remain the key obstacle to processing the effects of wars,” said Daliborka Uljarevic, head of an eminent non-governmental organisation Centre for Citizens’ Education at a recent round table on post-conflict Balkans societies. The title of the event was “How politicians see the process of reconciliation in the region”.

The path to reconciliation is still sluggish. Wars in former Yugoslavia began when two of its republics, Slovenia and Croatia, declared independence in 1991, with Bosnia-Herzegovina following in 1992. The moves were opposed by Belgrade, capital of Serbia and the six-member federation. War in the ethnically homogenous Slovenia lasted only 10 days with few victims and quick agreement between Ljubljana and Belgrade, which withdrew its forces from Slovenia.

However, under the pretext of protecting the interests of Serbs, who comprised significant parts of population in Croatia and particularly in Bosnia-Herzegovina, the Belgrade regime of Slobodan Milosevic engaged both the federal army and paramilitary units from Serbia to fiercely fight the independence movements. Croatia and Bosnia responded with creations of their own armed forces that bitterly fought what was called “the Serb aggression”.

In the 1991-95 war, more than 120,000 people were killed, most of them non-Serbs, meaning Bosniak Muslims and Croats. The number of displaced in Bosnia-Herzegovina, at the peak of the war, reached almost two million out of the 4.3 million population. People moved to the areas where their ethnicity prevailed within the country, Serbs to Serbian held and Muslims and Croats to Muslim and Croat held.

As for the economy, the Croatian State Auditing Commission has put the war damages at $36 billion, with destruction of 180,000 homes and 25% of economy. In Bosnia-Herzegovina, the University of Sarajevo professor Duljko Hasic has recently put the damages to $15.6 billion for the 44 months of the capital’s siege by the Yugoslav and Bosnian Serb armies.

None of the economies in the region have reached the gross domestic product level of 1989, the pre-war year established by regional economists as the basis for comparison.

“Sustainable development is still years away from the region,” Belgrade economy professor Miodrag Zec says. “It is not only because of wars, but also because of the disintegration of common production in former Yugoslavia, disintegration of its common market and lagging behind the economic changes that occurred in the 90s,” he added. “Whatever was achieved in post-war period fell behind with the global economic crisis since 2008,” Zec explained.

Thousands of people are still missing and war crimes are still being processed before the United Nations founded International Criminal Tribunal for former Yugoslavia (ICTY).

One of the most gruesome was the massacre of more than 7,000 Muslim men and boys by Bosnian Serbs in Srebrenica, a tiny Muslim enclave in eastern Bosnia, in July 1995. Some 5,000 victims have been dug up from shallow graves since and identified by DNA analyses. Mass graves are still being discovered in the mountainous areas surrounding Srebrenica. A forensic expert searches for remains of Bosnian Muslims in a mass grave near Srebrenica July 10, 2007. Credit: Reuters/Damir Sagolj.

The massacre came only months before the Dayton Peace Accords, sponsored by the United States and the international community, brought peace to Bosnia-Herzegovina, turning it into two-entity state. One is run by Bosnian Serbs, the other jointly by Bosnian Muslims and Croats.

It remains firmly divided along those ethnic lines, with Bosnian Serbs not even recognising Sarajevo as their capital, having one of their own in Banja Luka. The dysfunctional state is unable to provide even the joint results of census, which was carried out in 2013.

This is largely due to the almost non-existent returns, as people remain in the areas where their ethnicity prevailed. Swapping of homes between ethnicities was a routine in post-1995 period. Dozens of thousands who could not return simply migrated to third countries.

The return was almost impossible for Croatian Serbs as well. Their war-time alliance with Belgrade and rebellion against capital of Zagreb since 1991 led to sweeping operation “Storm” by Croatian army in August 1995, when almost 200,000 fled to Serbia proper. The Krajina region where they lived became a deserted area.

Croatian generals who led the operation, which saw 1,800 Serbs dead or missing, were acquitted of war crimes before the ICTY.

Thousands of Serbs have returned to Krajina, mostly the elderly, but most have found new lives in Serbia or abroad.

“There is no political will for the solution of problems that evicted Serbs face,” said Miroslav Linta, top Serbian official for issues of Serbs living outside of Serbia proper. “There are issues with 40,000 homes and more 50,000 people who can not get their pensions,” he added.

Yet justice for victims and rectifying of mistakes from the past seem to be largely forgotten by top politicians in the three countries, despite the fact that war-time leaders Slobodan Milosevic, Croatian Franjo Tudjman and Bosnian Muslim Alija Izetbegovic are dead now.

“Politicians don’t see their interest in the adequate dealing with issues related to recent past, as they don’t asses it as the subject that provides them with popular scores in public,” Uljarevic said.

“They should abandon the framework of daily political tactics and create context that will provide justice for victims, truth about war crimes and just sentences for perpetrators and those who ordered the crimes. This is the precondition for societies in the Balkans to build themselves in accordance to the values of civil societies, rights and freedoms for each and every individual,” she added.

Only two republics of former Yugoslavia left the ex-federation peacefully. Macedonia declared independence in September 1991 and Montenegro in 2006. What used to be Serbian province of Kosovo went down the road of independence since 1999, proclaimed it in 2008, closing the chapter of a history of joint state that was created in 1918.

This article was originally published at InDepthNews.