The Cosmic Irony of the Rise of Bernie Sanders

What makes Bernie Sanders so threatening to the Democratic establishment is that he stands for what millions of Democrats thought their party stood for all along. 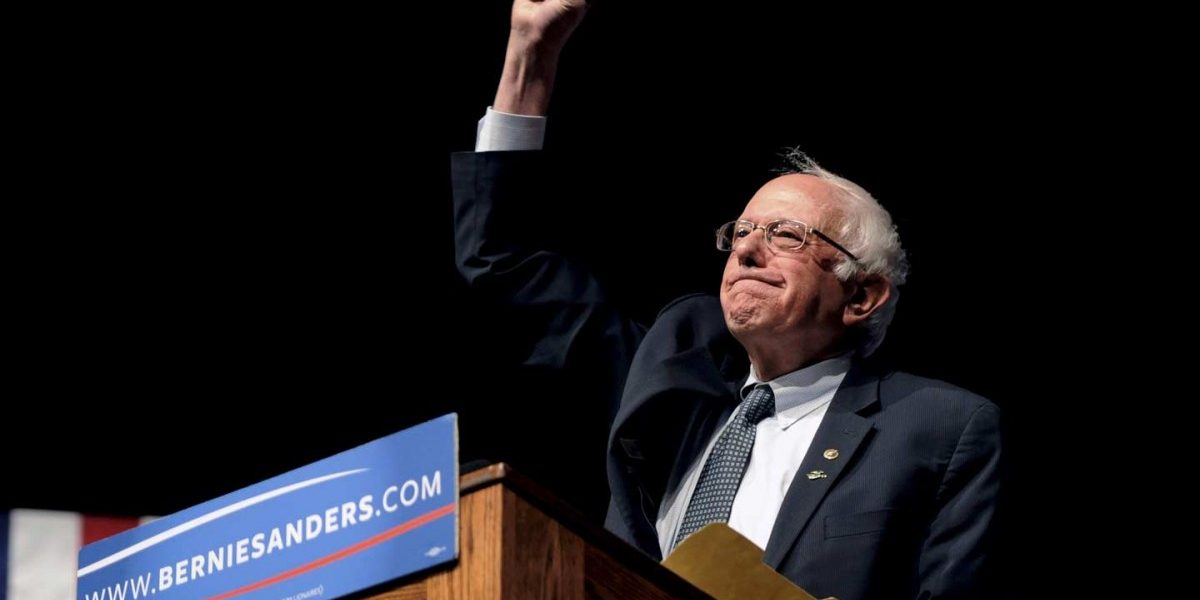 When I look at the Democratic primaries, I see an ideological struggle between Bernie Sanders and the party establishment.

But that probably isn’t what most Democratic primary voters see. They’ve been watching a totally different contest: a months-long televised audition to find a qualified, appealing leader who can win in November. Ideological differences aren’t foremost in their minds; in fact, many voters probably find them difficult to parse. The candidates are all Democrats, aren’t they? What more is there to say?

Voters do see differences, of course. But they’re mainly differences of style and temperament: some candidates are dealmakers, others are scrappers. Some are outsiders, others power brokers. And of course there are differences of age and gender. As for Bernie, probably everyone recognises him as the pugnacious outsider in the race, the kind of politician who errs more on the side of principle than expediency (whether they’re into that sort of thing or not).

But that’s not the same as a fundamental ideological difference. I suspect that when Sanders condemns the depredations of the “billionaire class”, or calls for a major power shift from corporations to workers, a majority of the party faithful assume he’s just saying out loud what popular Democrats like Barack Obama truly believe in their hearts but are, perhaps, too politically prudent to state so baldly.

Why do loyal Democrats labor under such illusions about their party leaders? Because those leaders go to great lengths to cultivate those illusions — and for the most part they succeed. Although many of us on the Left tend to tune out the stump-speech platitudes of mainstream Democrats, that makes it easy to lose sight of the fact that, to the ideologically unarmored, those platitudes can make a  speaker sound a lot like someone who shares the values of, say, a Bernie Sanders.

As a result, there are millions of loyal Democrats whose loyalty stems from no other source than the belief — the touching faith — that the Democratic Party is there to stand up to powerful interests on their behalf. The public personas of Obama and Sanders may differ wildly along a hundred different dimensions, but ideologically, tens of millions of Democrats see Bernie Sanders simply as Barack Obama, only more so.

This hypothesis can help us make sense of some otherwise inexplicable facts.

Take the confounding pattern of voters’ first and second candidate choices. How can it be that the top second choice of Biden supporters is Sanders? Aren’t Biden and Sanders polar opposites politically?

Yes — in reality. But in the perception of many rank-and-file Democrats, the two probably resemble each other quite a bit. Both are old-school, rough-around-the-edges, white-haired “Democrats” who are all about standing up for the little guy. That’s the image Biden strives to project, even as he (for example) works to strip bankruptcy protections from desperate debtors to please his funders at Delaware banks.

Or take the unshakable conviction of so many pundits that Bernie is a “factional candidate” with a “hard ceiling” of support due to his “extreme” political stances. That may be how the world looks to you when you’re surrounded by people who know their Yglesiases from their Kleins. (Though the actual Yglesias and Klein probably know better.)

But in the real world of ordinary Democrats, Bernie simply isn’t seen as a marginal radical:

It’s not hard to see how this puts the Democratic elite in an agonising bind. There is an ideological struggle going on within the party, even if many ordinary Democrats hardly notice it. But it’s a struggle that dare not speak its name. Whatever popular legitimacy the party possesses depends on the deliberately fostered misapprehension that its principles are those now most closely associated with Bernie Sanders. That makes it excruciatingly difficult to craft an effective anti-Bernie appeal.

The obvious solution, of course, is to resort to electability arguments. Indeed, if Sanders once seemed to have a ceiling of support, it wasn’t because Democratic voters were alienated by his “extremism” or turned off by his “rabid fanbase” (a hilariously solipsistic explanation that doubles as a diagnostic test for Terminal Onlineness). They worried about whether he could beat Trump.

Sanders is old, he’s strident, he’s Jewish. He calls himself a socialist and speaks with what is easily the least presidential accent of any nominee since Al Smith. He isn’t anyone’s textbook image of electability. That gave Democratic elites an opening: “We would love to see a President Sanders,” they implied, “but nominating Bernie will just give us another four years of Trump.”

But that argument has a fatal weakness: it can be tested at the ballot box. When Bernie won Iowa and New Hampshire it was received as a clarion signal that he could win, and all at once, the electability argument began a self-propelled collapse. The more Bernie wins, the more he seems viable; the more viable he seems, the more he will win.

For professional Democrats and pundits, this must be nothing short of maddening. Don’t these voters realise? There’s a huge difference between winning a Democratic primary, where a liberal electorate seeks a liberal nominee, and winning a nationwide general election, where the voter pool includes millions of deeply conservative, often religious, people, out there in the hinterland. Bernie Sanders can win a Democratic primary, fine. But that tells you nothing about whether he can win in November.

Except — that’s not at all how most Democratic primary voters see things. Remember, they don’t see the primaries as an ideological contest. To them, what took place in Iowa and New Hampshire was that thousands of Democrats spent months scrutinising the candidates to find the one with the best chance of beating Trump. And if half a million Democrats — or even just a plurality of them — came out of that process thinking Bernie was the most electable, why wouldn’t other Democrats take that as a sign that this guy’s got a good shot?

Incredibly, it’s the very ideological innocence of ordinary Democrats, their partisan loyalty and trust in their leaders — the very forces that have given those leaders a free hand to run the party the way they do — that now, like an infernal machine, work inexorably against them.

For decades, those party leaders propagated the conceit that intra-party disagreements were never really about ends, only means; that they’re merely about how best to realise ideals that everyone in the party supposedly shares: ideals of justice, compassion, defense of the little guy. Now, to their horror, they’ve realised that this conceit has left their flock wholly susceptible to the charms of any sincere politician who might come along with earnest talk about justice, compassion, and defense of the little guy.

Not for the first time in history, they who have put out the people’s eyes reproach them of their blindness. And now they’re getting their comeuppance.