"As a nation, we have to ask, when in god's name are we going to stand up to the gun lobby?" US President Joe Biden asked. People react outside the Ssgt Willie de Leon Civic Center, where students had been transported from Robb Elementary School after a shooting, in Uvalde, Texas, US May 24, 2022. Photo: Reuters/Marco Bello

At least 19 children were killed on Tuesday after a shooting at an elementary school in the southern US state of Texas, said State Senator Roland Gutierrez.

Gutierrez, citing Texas law enforcement officials, told broadcaster CNN that the shooter killed 18 children and three adults. The toll has since been revised.

Texas Governor Greg Abbott said earlier that the suspect had also died, adding that “it is believed that responding officers killed him.”

US President Joe Biden ordered US flags to be flown at half-staff at the White House, military posts, naval vessels and US embassies as a “mark of respect for the victims of the senseless acts of violence.”

Biden, who was returning from a trip to Asia, delivered an emotional address later on Tuesday.

He said that he got the news while on his 17-hour flight back to Washington, when “it struck” him that “these kind of mass shootings rarely happen anywhere else in the world. Why?”

“As a nation, we have to ask, when in god’s name are we going to stand up to the gun lobby?” he said, as Congress has repeatedly failed to pass gun control legislation. The blocking of such bills is largely attributed to pressure from the powerful National Riffle Association lobby.

“It is to turn this pain into action,” Biden said.

These kinds of mass shootings rarely happen elsewhere in the world.

Why are we willing to live with this carnage? Why do we keep letting this happen? Where in God’s name is our backbone to have the courage to deal with it?

It’s time to turn this pain into action.

What we know about the Uvalde shooting

The shooting took place at the small city of Uvalde, home to around 16,000 people.

The suspect, 18, was a local resident of the town and was believed to have had a handgun and a rifle with which he shot the victims, Abbott said.

DW correspondent in Washington, DC, Sumi Somaskanda said, “We have learned that the shooter drove up to the scene, abandoned his car and started the shooting.” 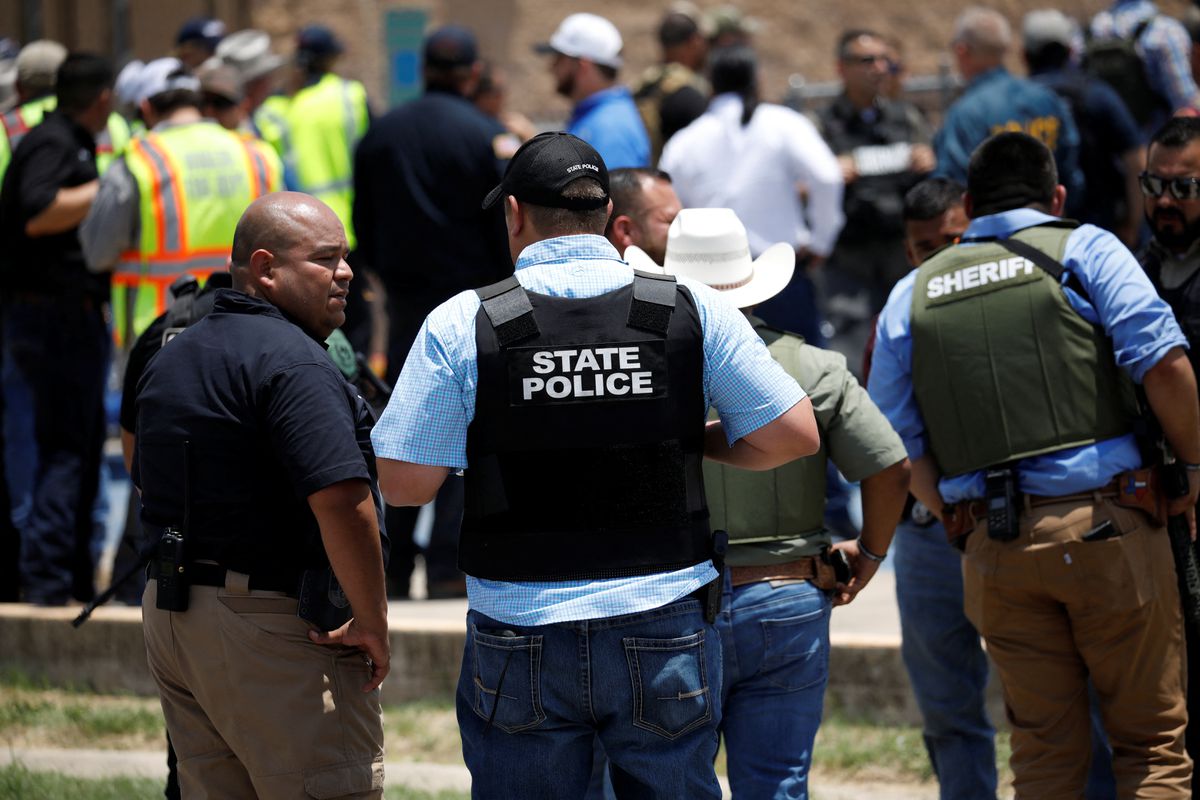 Law enforcement personnel guard the scene of a suspected shooting near Robb Elementary School in Uvalde, Texas, US May 24, 2022. Photo: Reuters/Marco Bello

Among the students killed there were second, third and fourth graders, meaning they were between the ages of 7 and 11, Somaskanda said.

A hospital had earlier reported the death of two people in the shooting. The Uvalde Memorial Hospital said it had received 13 children for treatment.

Tuesday’s shooting was one of the deadliest attacks at a US grade school since 28 people were killed in Sandy Hook, Connecticut, almost a decade ago.

“It’s been 10 years since I stood up in a grade school in Connecticut… since then, there have been more than 900 incidents on school grounds,” Biden said.

“We have another Sandy Hook on our hands,” said US Senator Chris Murphy of the state of Connecticut. “Our kids are living in fear, every single time they set foot in a classroom, because they think they’re going to be next,” he added.

The attack came less than two weeks after a white gunman shot and killed 10 Black people at a supermarket in the second-largest city in the state of New York, Buffalo.

The US has suffered recurring mass-casualty shootings and gun violence. According to data from the Centers for Disease Control and Prevention (CDC), 19,350 firearm homicides were reported in 2020, up nearly 35% compared to the year before. People react outside the Ssgt Willie de Leon Civic Center, where students had been transported from Robb Elementary School after a shooting, in Uvalde, Texas, US May 24, 2022. Photo: Reuters/Marco Bello

The head coach of the Golden State Warriors, Steve Kerr, who was in Dallas on Tuesday night to play the Mavericks, seeking a spot in basketball’s NBA Finals, refused to answer questions on the game in his pre-match press conference.

“In the last 10 days, we’ve had elderly Black people killed in a supermarket in Buffalo, we’ve had Asian churchgoers killed in southern California, and now we have children murdered at school. When are we going to do something?” he asked, before calling on US senators to reconsider a draft law on background checks for gun purchases called H.R.8 that has passed the House of Representatives twice in recent years.

“We are being held hostage by 50 senators in Washington who refuse to put it to a vote despite what we, the American people, want,” Kerr said.

His opposing head coach, Jason Kidd of the Mavericks, also declined to answer questions on basketball, saying these things were not at the forefront of his mind even before the crucial game. The WNBA’s Dallas Wings issued a statement saying “Tonight we play for Uvalde.”

NBA veteran star LeBron James, meanwhile, asked, “Like when is enough enough man” on Twitter, saying that “these are kids and we keep putting them in harm’s way.”

The San Antonio Spurs, the closest team to Uvalde, also offered the city its condolences, saying “There are no right words.”