Their exit still leaves the longer-term fate of the US-brokered deal with Turkey in question.

The Kurdish-led Syrian Democratic Forces (SDF) have withdrawn from the besieged border town of Ras al-Ayn, fulfilling part of a fragile US-brokered deal with Turkey.

On Sunday, dozens of vehicles carrying SDF fighters and civilians rolled out of the border town that has been at the centre of clashes since the Turkish military and its rebel proxies launched an offensive on October 9, after the US said it was pulling troops from the region.

The Turkish military, SDF and a war monitor confirmed that Kurdish-led forces had exited the city. The truce only requires SDF fighters to leave, but many civilians fled for fear Turkish-backed rebels would commit more atrocities.

The withdrawal still leaves in doubt the longer-term sustainability of the US-Turkey negotiated 120-hour pause in fighting.

Turkey wants to create a 32-kilometre (20 mile) deep “safe zone” along a 420-kilometre stretch of its border to remove what it says are Kurdish “terrorists” and relocate Arab Syrian refugees into area. The Syrian Kurdish People’s Protection Units, or YPG, which has links to Kurdish insurgents in Turkey, is a main component of the SDF.

The Syrian Kurds say they are committed to the US-mediated agreement, but plan to only withdraw from a 120-kilometre section of the border between Ras al-Ayn and Tel Abyad to the west, which has an Arab majority. The Kurdish pullout has so far not extended beyond Ras al-Ayn. 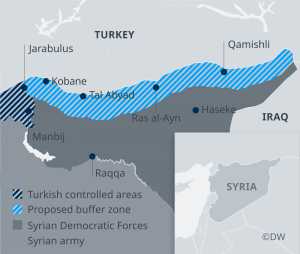 Map showing the changes in demography in the region with the onset of the US brokered Turkey-Syria deal. Map: DW.

Earlier Sunday, Turkish President Recep Tayyip Erdogan repeated threats to continue military operations if all 13 points of the deal agreed with the US were not implemented.

However, Turkey’s plans in northeast Syria were complicated when, with Russian mediation, the SDF invited the Syrian army and Russian troops into several areas under its control.

US President Donald Trump’s decision to withdraw troops from northern Syria leaves Washington with little influence on the ground to direct events, effectively giving Russia power to enter the vacuum. The US move was widely viewed as giving a green light for a Turkish attack on SDF forces that the US had allied with to defeat the “Islamic State.”

Just as the 120-hour truce is set to end on Tuesday, Erdogan will meet in the Black Sea city of Sochi with Russian President Vladimir Putin, a key backer of the regime in Damascus.

The issue of the YPG’s withdrawal from the cities of Manbij and Kobani, two areas where Russian and Syrian forces have entered, is set to be discussed by Erdogan and Putin, Turkish Foreign Minister Mevlut Cavusoglu said Sunday.

“We believe we can reach an agreement with them to work together in the future, just like we have before,” Cavusoglu said. While Erdogan and Putin have worked together on managing the Syrian conflict, Russia has said the Turkish military operation should be limited and the territorial integrity of Syria protected.