Sudan Must Clear Some Key Hurdles to Install Democracy

Three big challenges include forging a unity amongst the protesters, managing the fragmented security apparatus, as well as dealing with rebel groups. 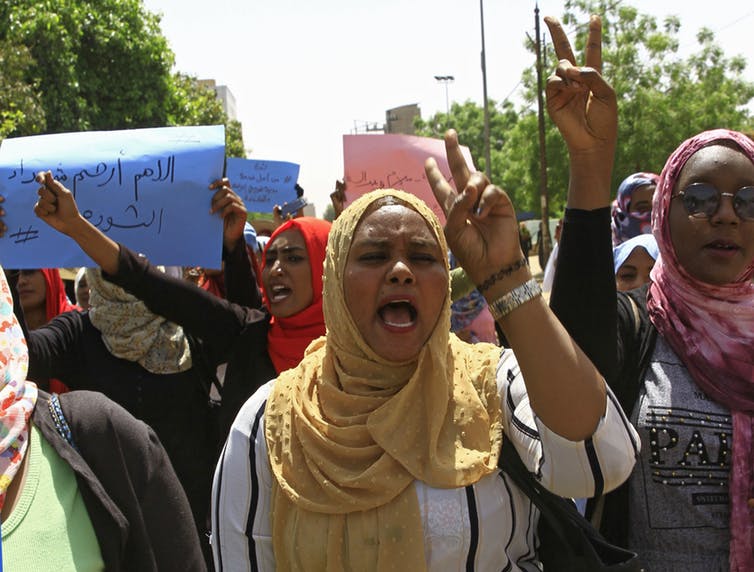 Sudanese protesters at a demonstration outside the army headquarters in Khartoum. EPA/Stringer

Sudan is no stranger to uprisings. After months of protest a massive civilian uprising finally ousted former Sudanese President Omar al-Bashir from power. He had been president for 30 years and, in the wake of his ouster, has been charged in connection with the deaths of protesters.

Even though the current protests have resonated with all members of society, history shows that civilian-led governments tend not to last in the country. With tensions rising between protesters and the transitional military council, the fear is that things could get worse before they get better. This would allow chaos to settle in, preventing democracy from taking root. As things stand, the battle for Sudan is far from over. Confrontations between the protesters and the security services are ongoing.

Some of the country’s powerful generals and opposition leaders have agreed in principle to the formation of a joint civilian-military council to lead the country’s political transition. But they are unable to agree on how big a role the generals would play on the new council.

Even assuming that agreement is reached, Sudan must still overcome a number of challenges if it is to usher in a viable democracy. These include trying to forge unity among those who led the protests. They were led by a number of groups that fell come under an umbrella organisation called the Freedom and Change Coalition. This consisted of over 21 political parties, trade unions, youth movements and civil society organisations.

The other two big challenges are managing the fragmented security apparatus, as well as dealing with rebel groups, particularly those who feel most aggrieved in Darfur.

Disunity could stymie any efforts at securing a new democratic order.

To oust al-Bashir the Sudanese Professional Association, which led the uprising, came together under the Freedom and Change Coalition with the Sudanese Communist Party, Sudan People’s Liberation Movement-North, and the Sudanese Socialist Union. The coalition has brought together 22 political parties, trade unions, youth movements and civil society groups.

While the coalition has agreed on a post-Bashir agenda, its constituent members can’t agree on who should be represented, nor who should lead the civilian transitional government. There’s also major disagreement on whether or not to include rebel groups. Some political groups want to leave out rebel groups while the professional association wants them included.

The coalition excludes the National Congress Party, the political party that supported al-Bashir’s rule for more than two decades. An Islamist nationalist party with Sunni Islamic beliefs, it was partly responsible for the introduction of harsh Islamic policies. The party could still pose a threat to Sudan’s stability because of its connections with the country’s military, elites and groups or individuals returning from Middle East conflicts.

The country’s fragmented security apparatus – which were tightly controlled by al-Bashir – is also a major potential stumbling block. When the National Intelligence and Security Service counter-insurgency units started attacking protesters outside the military headquarters, it was the military who protected protesters; this led to two military personnel being killed.

Coupled with this are the differences between protesters’ demands and senior generals who have external support from neighbouring and Middle Eastern states to form a transitional military council. All have a different agenda to those of the protesters.

The third and final obstacle to democracy has to do with the rebel groups in Darfur, South Kordofan, and the Blue Nile. Residents in these areas have suffered human rights abuses.

The rebel groups have been fighting al-Bashir and the state for decades. There is mutual mistrust between members of the transitional military council, the government of Sudan and the rebel movements. Distrust is deep. And it’s unclear whether the political parties and protesters can negotiate power with a group that includes individuals accused of war crimes. In addition, recent protests in these locations have been met with a hard crack down from security forces.

Despite the ongoing tensions, and unresolved issues, I believe that Sudan has a chance at meaningful reconciliation. But a few words of caution are necessary. The negotiating parties must be careful not to plunge the country into chaos. This means that if reforms are rushed, cracks will begin to appear between the Freedom and Change Coalition and the people it represents. This would strengthen the military’s position and its ambition to control the state.

What Sudan needs now are slow reforms that build the right institutions through a democratic and technocratic process. But these reforms of the state cannot rely on existing structures put in place by the previous government as well as generals and officials that served the same government.

Sudan also needs to find the the right leader – someone who can manage all parties’ demands. It is important to note that the military and the economic elites still call the shots in Sudan. No leader will succeed without taking their interests and expectations into account.

A rush to elections at this stage will hamper Sudan’s ability to deal with the issues arising and quicken its reversion to the status quo. It is imperative that the country finds its own unique transition. It is only on its own terms that it will develop into an inclusive and prosperous society – and eventually a fully functioning democracy.