Sudanese people chanted slogans outside the court, some in support of Bashir, who has been jailed since he was toppled in April last year following mass protests against his 30-year rule. Khartoum: Ousted Sudanese President Omar al-Bashir appeared in court on Tuesday at the opening of his trial for leading the military coup that brought him to power in 1989, before the hearing was adjourned to find a bigger venue amid chaotic scenes outside.

Hundreds of lawyers, supporters, family members and journalists jostled outside, complaining to security officials that they were unable to get into the court, a Reuters journalist said.

Sudanese people, ringed by police, also chanted slogans outside the court, some in support of Bashir, who has been jailed since he was toppled in April last year following mass protests against his 30-year rule.

The trial, which includes some of Bashir’s former allies, was adjourned until August 11 when it will be moved to a larger venue.

Bashir could be sentenced to death if convicted, a lawyer and SUNA, the state news agency, said.

State TV footage showed scores of security members inside the packed but otherwise calm courtroom but did not show Bashir himself. Two witnesses who attended the session told Reuters they saw Bashir inside the defendants’ cage in a white prison uniform.

Also read: Bringing Al-Bashir to Justice: The Options Available to the ICC

In December, his lawyer told reporters it was a “political trial par excellence” more than 30 years after the event. Judge Essam Eddin Mohamed Ibrahim promised a fair trial.

Another Sudanese court has already handed down a two-year sentence in December on corruption charges. Bashir also faces trials and investigations over the killing of protesters.

Bashir is also wanted by the International Criminal Court, which issued arrest warrants against him in 2009 and 2010 on charges of genocide, war crimes and crimes against humanity in Sudan’s restive Darfur region.

Before any statements or evidence could be given, the judge postponed the hearing. “We will end this court session (and adjourn trial proceedings) to take better measures (to have a bigger hall to include all lawyers),” he said. 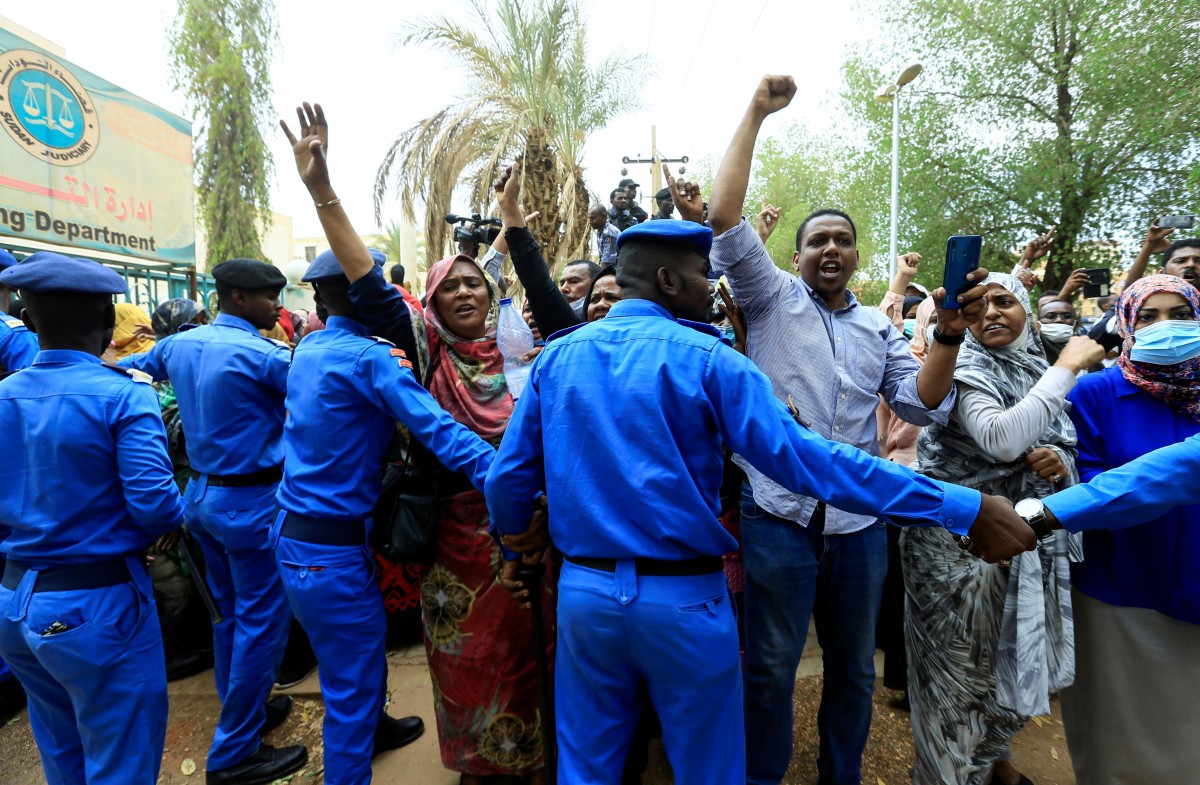 Sudanese police officers control civilians as they chant slogans outside the court during the new trial against ousted President Omar al-Bashir and some of his former allies on charges of leading a military coup that brought the autocrat to power in 1989 in Khartoum, Sudan on July 21, 2020. Photo:Reuters/Mohamed Nureldin Abdallah

Some lawyers had complained their colleagues had not been able to get into Tuesday’s session. Others asked for more precautionary measures due to the risk from the coronavirus.

The judge refused defence lawyers’ requests to release some of the defendants before the resumption of the trial, SUNA said.

A civilian transition government took over from Bashir under a three-year power-sharing deal with the military deal who helped remove Bashir but it has struggled to make fix an economy in crisis.