The Small Hands of Moroccan Recycling

Waste collectors, sorters and recyclers in Morocco keep the town from suffocating and are vital in the fight against climate change. 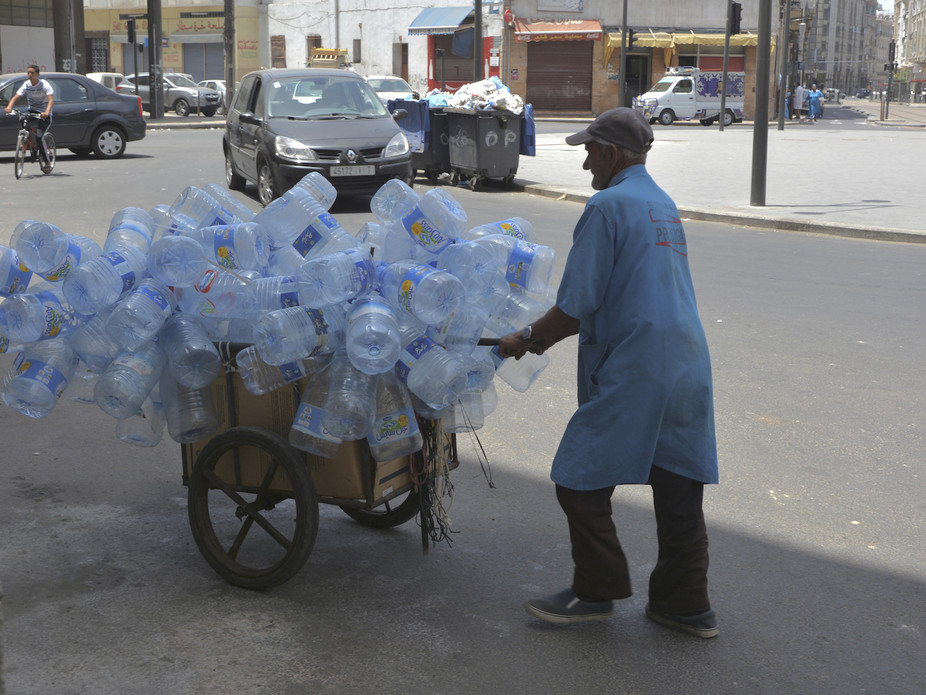 This article is based on a series about recycling documented in the 2017 book What to do with leftovers? Re-employment in Accumulation Societies.

The photographs are by Pascal Garret, sociologist and freelance photographer, who collaborates with social scientists on the theme of waste recovery and recycling.

Casablanca, Morocco, summer 2016. With constant heat often above 30°C, garbage can quickly suffocate the four millions inhabitants of this city. But as visitors navigate through the second-largest city of the Maghrebian region, small hands are making sure that large quantities of waste do not pile up on landfills by offering them new life.

Despite their tremendous and tiring work, they remain excluded from the Moroccan society because of the uncleanliness of their work, and the nature of their living spaces.

They live on the margins of legal urban areas, in slums and makeshift houses, which are regularly demolished or threatened by real estate and urban projects. While working in the streets, they are often victims of violence either committed by the authorities or other inhabitants.

We conducted interviews with many members of this community from 2011. Our objective was to show that these waste collectors, sorters, semi-wholesalers, recyclers and transporters often consider their work as a real profession and believe that their role is essential, especially given that environmental issues have never been higher on the agenda.

According to our multi-site surveys, more than a third of Casablanca’s household waste would escape rejection from landfills.

Far from presenting an image of misery and exclusion, we wish to portray this population free from the stigma that usually accompanies activities linked to waste.

Situated on the outskirts of Casablanca and in a topographic depression, the Lahraouine district remains virtually invisible from the outside. Most workers live in neighbouring douars (slums) where running water is absent and electricity is supplied by generators or illegal connections.

Several real estate projects have put pressure on the city to revamp the district and get rid of its slums. As the waste collectors do not own their lands and there’s no rehousing project, they live in fear of eviction.

This bouar (the word is derived from the French word éboueur for garbage man) returns from the city with a cart filled with his daily collection. But the increasing number of containers buried in the affluent neighbourhoods of Casablanca reduces access to this waste resource.

More often than not, the bouara (plural for bouar) have to limit their work to open bins in working-class neighbourhoods. They are also more tolerated in these areas than in the city’s central districts or middle-upper class areas. In the latter, police can harass them, even arrest them and confiscate their donkeys and carts.

The gelssas (a term derived from the verb gels, which means sit down in darija, the language of the Maghreb region) are enclosures of various sizes surrounded by palisades (metal sheets, tarps, boards or dried waste that form a kind of wall) where the bouara centralise their harvest after each city tour.

Their collection is sold by weight and consists mainly of cardboard, plastics, metals, glass, fabrics and vegetable waste. Valuable objects, after changing hands several times, will eventually end up in one of the city’s flea markets (joutiya). Nothing that can be used is left behind.

The bouara of Casablanca can make about €20 daily, but many must rent their equipment (cart and animal) from their bosses for €2.

Some gelssas are versatile sorting and recycling sites (plastics, wood, metal, rags), where materials are sorted by type. Others specialise in a particular material, as is the case below for plastic.

After collection and sorting, some materials have to be compacted and crushed to take up less space, which adds value. The materials will then be sold to informal sector wholesalers or to the formal sector through pick-ups or trucks sent to carry the waste.

In Lahraouine, we have not seen many women in the gelssas. Among the 3,000 active waste-recyclers we roughly counted, the majority are young men and we estimated that there were only 500 to 600 women. They are only assigned to sorting tasks.

The economic crisis in Morocco has led to an increase of waste workers in Casablanca.

Waste collectors come, for the most part, from the countryside to escape poverty. Some of them originate from very remote villages in the eastern regions of Casablanca.

Many, especially youngsters, come and go according to agricultural cycles. Nearly 19% of Morocco’s agriculturally dependent rural population still lives in poverty or in danger of becoming impoverished. These seasonal workers are hosted by relatives in the douars of Lahraouine or live in sheds inside gelssas.

This boss of a gelssa employs several waste collectors. He owns a few carts pulled by a donkey or a horse, and is a “middle-income earner”.

There is a very strong hierarchy in the world of recycling. At the lower level are the simple bouara and women who sort and earn low incomes. At the end of the higher range are the bosses of large gelssas who own one or more trucks and plastic crushers.

Gelssas bosses are very familiar with the cost and value of materials on the market and keep themselves updated through the internet or their mobile phones. They know exactly where, to whom and when to sell to get the maximum benefit from their wares.

Situated about 20 kilometres south of Greater Casablanca, the Mediouna’s landfill receives nearly 3,500 tons of household waste each day, brought in by the trucks of waste-recycling companies.

At this site, which should normally mark the end of life for Casablanca’s waste, some 600 illegal waste collectors extract about 1000 tons of materials daily that will be re-injected into the informal and formal recycling circuit.

The business of recycling factories and export wholesalers depends heavily on the activities of street collectors or the Mediouna landfill from whom they buy recovered materials at a lower cost. Secondary raw materials produced by the formal sector of the economy are largely derived from the work of these hidden workers.

Blurring the borders, this small world of informal workers is thus – directly or indirectly – well inserted in the economic chain on every level: local, regional, national and even international. The PET brought in by waste collectors, for example, is exported to China.

Many of them have also fully understood and integrated environmental arguments. One, called Mustapha, told us in an interview in 2013:

“We contribute to the economy of Morocco. It is thanks to us that this waste is recycled instead of being simply buried or burned. This is our livelihood, it’s our survival and it makes our community live”

This wholesaler even tried to create an association for the waste collectors of the Lahraouine district in order to get them officially acknowledged and organised. But so far he has faced indifference or opposition from the authorities.

His failure highlights the perpetual stigma attached to the profession of waste collecting. It also shows their isolation and relegation to the spatial and social margins of the economic capital of Morocco.

Yet, elsewhere in the world, innovative experiments, mobilisation of reclaiming communities and associations are signs that integration, access to social rights and, more broadly, recognition or informal waste collectors are possible.