The Syrian military denied responsibility and said it would never use chemical weapons, echoing denials it has made over the course of the war. 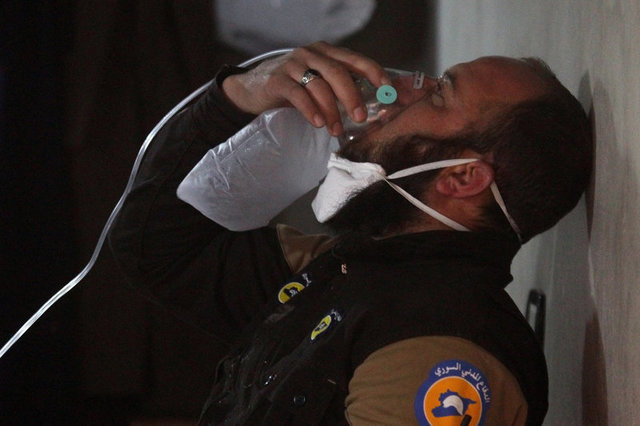 A civil defence member breathes through an oxygen mask, after what rescue workers described as a suspected gas attack in the town of Khan Sheikhoun in rebel-held Idlib, Syria April 4, 2017. Credit: Reuters

Beirut: A suspected Syrian government chemical attack killed scores of people, including children, in the northwestern province of Idlib on Tuesday, a monitoring group, medics and rescue workers in the rebel-held area said.

The US government believes the chemical agent sarin was used in the attack, a US government source said, adding it was “almost certainly” carried out by forces loyal to Syrian President Bashar al-Assad.

The Syrian military denied responsibility and said it would never use chemical weapons, echoing denials it has made over the course of the more than six-year Syrian civil war that has killed hundreds of thousands, created the world’s worst refugee crisis and drawn in nations such as Russia, Iran and the US.

The US, Britain and France on Tuesday proposed a UN Security Council resolution condemning the attack, which they have blamed on Assad’s forces. Diplomats said the resolution would likely be put to a vote on Wednesday.

The attack also sparked political recriminations. US President Donald Trump condemned the “heinous actions by the Bashar al-Assad regime,” but also blamed his predecessor Barack Obama’s “weakness” on Syria. A Syrian opposition figure said it was a consequence of recent US statements suggesting a focus on stopping ISIS militants rather than ousting Assad.

If confirmed, the incident reported in the town of Khan Sheikhoun would be the deadliest chemical attack in Syria since sarin gas killed hundreds of civilians in Ghouta near Damascus in August 2013. Western states said the Syrian government was responsible for that attack. Damascus blamed rebels.

The head of the health authority in rebel-held Idlib province said more than 50 people had been killed and 300 wounded in the latest incident. The Union of Medical Care Organisations, a coalition of international aid agencies that funds hospitals in Syria, said the death toll was at least 100.

The British-based Syrian Observatory for Human Rights said the attack killed at least 58 people and was believed to have been carried out by Syrian government jets. It caused many people to choke and some to foam at the mouth.

Director Rami Abdulrahman told Reuters the assessment that Syrian government warplanes were to blame was based on several factors such as the type of aircraft, including Sukhoi 22 jets, that carried out the raid.

“We deny completely the use of any chemical or toxic material in Khan Sheikhoun town today and the army has not used nor will use in any place or time neither in past or in future,” the Syrian army command said in a statement.

The Russian defence ministry, whose forces are backing Assad, said its aircraft had not carried out the attack. The UN Security Council was expected to meet on Wednesday to discuss the incident.

Reuters photographs showed people breathing through oxygen masks and wearing protection suits, while others carried the bodies of dead children. Corpses wrapped in blankets were lined up on the ground.

Activists in northern Syria circulated pictures on social media showing a man with foam around his mouth, and rescue workers hosing down almost-naked children squirming on the floor. 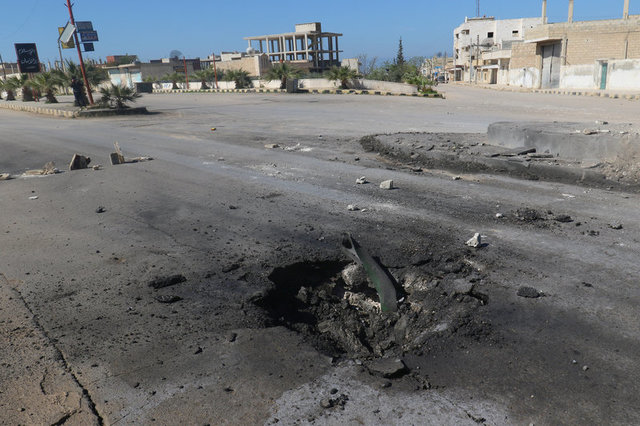 A crater is seen at the site of an airstrike, after what rescue workers described as a suspected gas attack in the town of Khan Sheikhoun in rebel-held Idlib, Syria April 4, 2017. Credit: Reuters

Mounzer Khalil, head of Idlib’s health authority, said hospitals in the province were overflowing with victims.

“This morning, at 6:30 am, warplanes targeted Khan Sheikhoun with gases, believed to be sarin and chlorine,” he told a news conference.

The attack sparked a blame game within the US.

Trump faulted Obama for not enforcing a 2012 “red line” against the use of chemical weapons and suggested the attack was “a consequence of the past administration’s weakness and irresolution.”

US Secretary of State Rex Tillerson issued an appeal for Russia and Iran “to exercise their influence over the Syrian regime and to guarantee that this sort of horrific attack never happens again.”

In contrast, Syrian opposition member Basma Kodmani blamed recent statements by Tillerson and US ambassador to the UN Nikki Haley that suggested the new US administration could live with Assad remaining in power for the time being.

“This is a direct consequence of American statements about Assad not being a priority and giving him time and allowing him to stay in power,” Kodmani told Reuters via text, saying the US officials’ comments amounted to “a blank check for Assad.”

French foreign minister Jean-Marc Ayrault said the attack was a way of testing the Trump administration and urged Washington to clarify its position on Assad.

The incident was condemned by a host of leaders, including the president of France, who directly blamed Syrian government forces, and Britain, which said Assad would be guilty of a war crime if his government was proved responsible.

The draft text of the UN resolution, seen by Reuters, says Syria’s government must provide an international investigation with flight plans and logs for Tuesday, the names of all helicopter squadron commanders and provide access to air bases where investigators believe attacks using chemicals may have been launched.

In February, Russia, backed by China, cast its seventh veto to protect Assad’s government from UN Security Council action, blocking a bid by western powers to impose sanctions over accusations of chemical weapons attacks during the conflict.

A series of investigations by the UN and the Organisation for the Prohibition of Chemical Weapons (OPCW) found that various parties in the Syrian war had used chlorine, sulfur mustard gas and sarin. 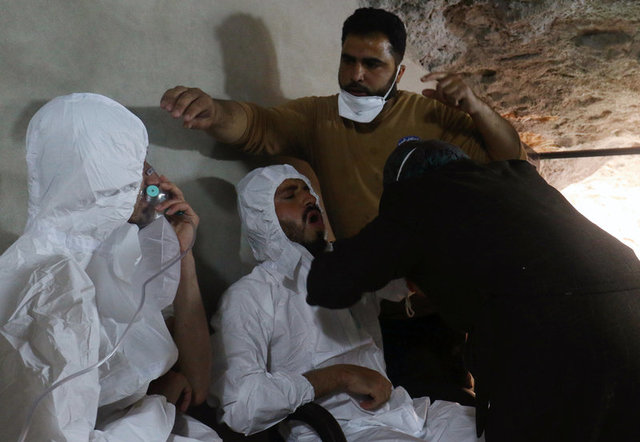 A man breathes through an oxygen mask as another one receives treatments, after what rescue workers described as a suspected gas attack in the town of Khan Sheikhoun in rebel-held Idlib, Syria April 4, 2017. Credit: Reuters

Idlib’s population has ballooned, with thousands of fighters and civilians shuttled out of Aleppo city and areas around Damascus that the government has retaken in recent months as Assad has gained the upper hand in the war.

The US has also launched a spate of air strikes in Idlib this year, targeting jihadist insurgents.

Under the deal, Syria agreed to give up its toxic arsenal and surrendered 1,300 tonnes of toxic weapons and industrial chemicals to the international community for destruction.

UN-OPCW investigators found, however, that it continued to use chlorine, which is widely available and hard to trace, in so-called barrel bombs dropped from helicopters. Chlorine is not a banned substance, but the use of any chemical is banned under 1997 Chemical Weapons Convention, to which Syria is a member.