The mayor said he was visibly annoyed at the fact that Scindia, instead of providing the Indians with details on their flight back home, came along with cameras and spoke about all that he had done. 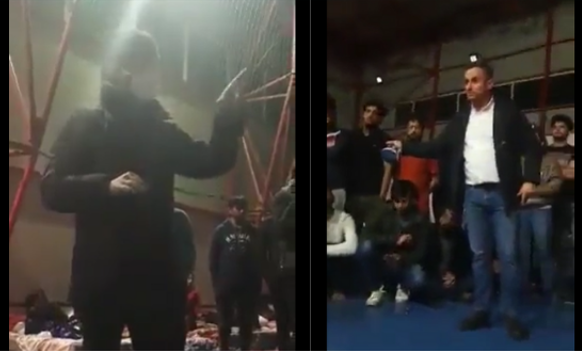 A screengrab from the viral video of a verbal spat between Union minister Jyotiraditya Scindia (left) and Romanian mayor Mihai Anghel.

New Delhi: A recent video of civil aviation minister Jyotiraditya Scindia’s verbal spat with the Romanian mayor Mihai Anghel has gone viral. In the video, Scindia, who is in Romania to help Indians stranded due to the ongoing Russia-Ukraine war, was stopped by the mayor of Snagov while he was speaking, and said, “Explain to them when they leave [for] home. I provide the shelter, I provide the food and I helped them, not you.”

“Let me tell them what I have to tell them,” Scindia retaliated.

At the end of the video, the students were seen applauding the mayor for his response.

The Quint spoke to mayor Anghel who explained that he wasn’t looking for a political scandal and that all he did was stand up for the Indian students, who wanted to know just one thing – when were they going home?

He further said that the Romanian team received 157 Indian students and the citizens of the Snagov region provided all the food and necessities to the stranded Indians. However, he was visibly annoyed at the fact that Scindia, instead of providing the Indians with details on their flight back home, came along with cameras and spoke about how they [the Indian government] had rescued dogs and some other points about all that he had done.

“He was as if prepared to present a PR speech, and not comfort the students who had just fled war and wanted to go home,” the mayor said.

“These kids weren’t treated with dignity at the borders and the speech was an addition to that. It really put me off. He hadn’t provided any of the necessities for these students and came here and disrespected me when I asked him for details about their flight home.”

According to the report, the Indian students had crossed the Siret border on 27 February and were given shelter inside a school gymnasium of Ghermanesti village at the Snagov commune. The mayor said that they had received instructions from the local Indian authorities that buses would come the next day. However, with Scindia’s visit, he hoped that the students’ questions would be answered.

When asked about the mayor’s apprehensions, Union minister Scindia told The Quint over a phone call, “The students had just made a very arduous journey. There was going to be some apprehensions and some worries, which was what was expressed by the mayor… which is fine. I mean, I’m there to assuage those concerns. As a representative of India, we have to stomach that – get to the solution and get them out.”

When The Quint asked the mayor why he lost his cool, he said, “I wasn’t angry like a lot of people think. I lost my cool because I was sad for those kids. I heard so much about what they went through at the border and they shouldn’t be used for some PR shoot. I didn’t know that he was the aviation minister. I would have done the same if I knew. I was compelled to call his behaviour out. You can’t come to my country, my home, and disrespect us.”

Anghel further revealed, “We shook hands and dealt with it like adults. Someone among the students told him that I was the mayor of the region. He didn’t apologise for disrespecting us. I don’t expect an apology and I understand the times are difficult for everyone – for the Indian evacuation teams as well. At the end, when we shook hands his tone was very cold. Neither firm nor soft, as if he was in a rush. He had no time; finished the address and went away. It was a very unpleasant exchange.”

Scindia also confirmed to The Quint that the two shook hands afterwards, adding “that was the end of it”.

Mayor Anghel told the news outlet that he has been receiving threats and abuses by Indian social media users.

“I am receiving a barrage of hate messages possibly from paid trolls who are bombarding my official pages. I am a politician and I can handle all this, but receiving a hate message from foreign citizens and not my own people, is a first,” he told The Quint.

A screenshot of one of the abusive messages he sent to The Quint read, “F**k you. You talk to the Indian government minister ok. Behave.”

He said that he didn’t expect these threats for having shown kindness to the students.

On the other hand, the students sheltered in Snagov have been sharing messages of gratitude to Anghel for helping them in their hour of need.

“It’s not just the students, I have been getting calls from their parents as well. I just spoke to a family that was grateful for the kindness these kids received in my country. This is all that the students were looking for, not the PR drive they were subjected to. Even on the flights, they tell me they were asked to say great things about what minister’s team had done. They are educated to be doctors. You can’t fool them. They refused,” he said.

Vipin Singh, a student of Ternopil National Medical University who was present during Anghel’s exchange with Scindia’s, told the news outlet, “After going through such a terrible time, it wasn’t our government that helped us… it was mayor Anghel and the Romanian people. I can’t hide the truth. People should know. Indian authorities only helped us with a flight from the airport.”

He further said, “The next day, Mr. Scindia’s PA called and messaged us the next day and asked us to record videos thanking his efforts. Some of us refused, but I had to record it as I was scared that they may leave me stranded if I spoke the truth. I was desperate to see my family and had to say what Scindia’s team instructed me to.”

Mayor Anghel, while speaking to the next groups of Indian students arriving at the shelter in Snagrov, said, “Just before I called you, we sent off 134 students to the airport. We won’t stop fulfilling our humanitarian responsibilities and hopefully one day I can speak to minister Scindia and this will all be behind us – only the welfare of the students would remain a priority.”