Saudi Arabia created the humanitarian catastrophe in Yemen. So why is the UN praising the kingdom for tossing Yemen a measly amount of humanitarian aid? People are pictured near their tent at a camp for internally displaced people in Dharawan, near the capital Sanaa, February 28, 2017. Photo: Reuters/Khaled Abdullah

The United Nations describes itself in its charter as an international moral authority created to “save succeeding generations from the scourge of war.” But activists who are trying to end the US war on Yemen say that, in a dark twist on this mission, the international body is withholding criticism from the US-Saudi military coalition, and effusively praising its leaders, to avoid jeopardising donations to humanitarian funds aimed at helping ease the suffering created by that war.

As Jehan Hakim, the chair of the Yemeni Alliance Committee, puts it, “The same hand we’re asking to feed Yemen is the same hand that is helping bomb them.”

On June 15, UN secretary-general António Guterres removed the US-Saudi military coalition, which has been waging war in Yemen for more than five years, from an international blacklist of states and armed groups responsible for killing and maiming children, in a huge PR win for Saudi Arabia. He cited a supposed decrease in child killings, even as he acknowledged the coalition was responsible for killing 222 children last year, 171 of them from bombings — a number that certainly does not include the toll of famine and disease outbreaks (including COVID-19) worsened by the war and blockade. The UN’s move provoked instant rebuke from antiwar and humanitarian organisations, particularly as it coincided with reports that, the same day the report came out, the US-Saudi coalition had bombed a vehicle in northern Yemen, killing thirteen civilians, four of them children.

Hassan El-Tayyab, lead lobbyist on Middle East policy for the Friends Committee on National Legislation, a progressive lobby organisation, says the move has a simple explanation. “To me,” he says, “it’s really clear what they’re trying to do: they’re trying to curry favour so that Saudi Arabia will pony up more money for Yemen to keep humanitarian aid going.”

El-Tayyab’s theory is supported by a number of indicators. In June 2016, former UN secretary-general Ban Ki-moon publicly admitted that he removed Saudi Arabia from the same “child-killer list” in the UN’s 2015 report in response to unspecified threats to pull funding from UN programs. (Media outlets found these threats came from Saudi Arabia, one of the largest UN donors in the Middle East.) “The report describes horrors no child should have to face,” Ban said at a press conference in 2016. “At the same time, I also had to consider the very real prospect that millions of other children would suffer grievously if, as was suggested to me, countries would defund many UN programs.”

Despite this admission, Ban did not immediately restore the US-Saudi coalition to the blacklist, although it was eventually returned. 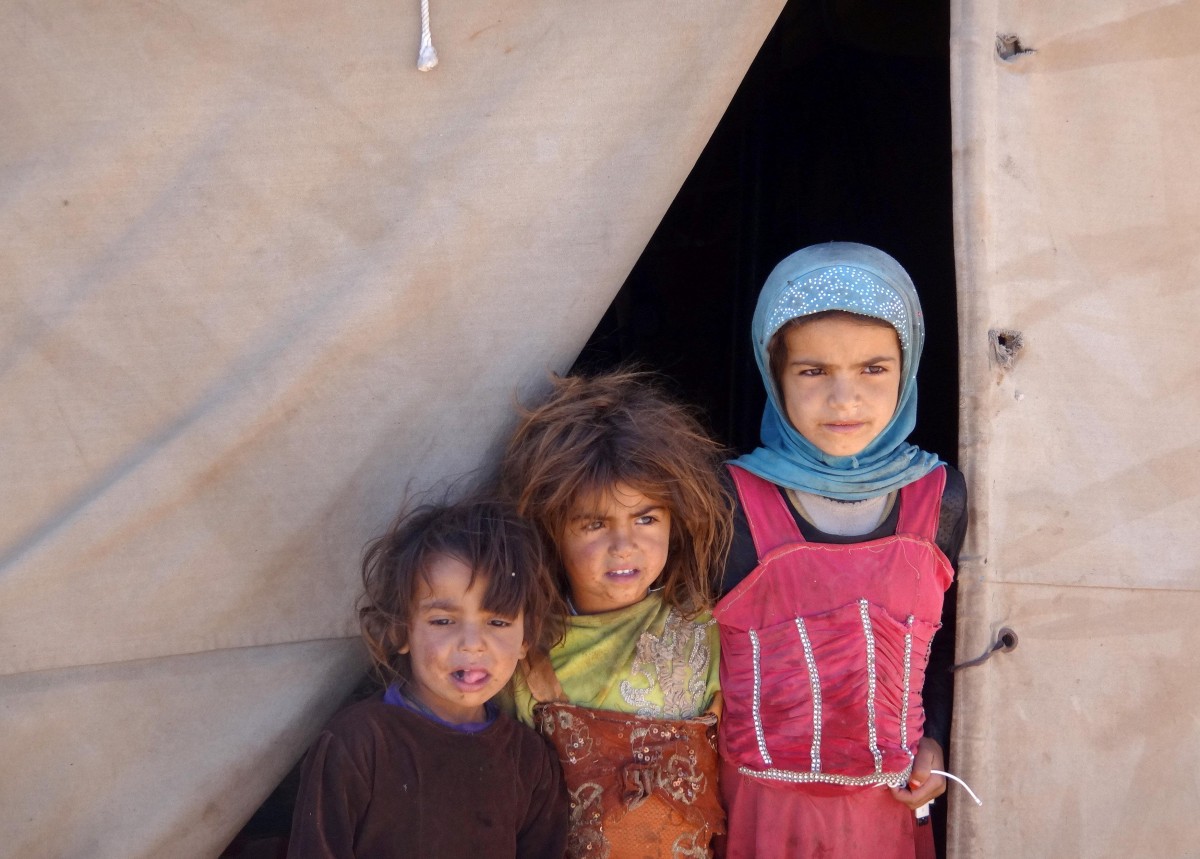 Girls stand at the entrance to their tent at a camp for internally displaced people in the northwestern city of Saada, January 30, 2017. Photo: Reuters/Naif Rahma

But there are more recent indicators to draw on. On June 2, the UN cohosted a virtual donors’ summit with Saudi Arabia to raise money for humanitarian relief in Yemen, which is being devastated by COVID-19, in large part because the US-Saudi coalition has decimated its hospital system and a Saudi-led blockade is cutting off critical medical supplies.

Guterres, who made the recent decision to scrub Saudi Arabia from the blacklist, gave the opening remarks for the event. “I thank the government of Saudi Arabia for cohosting this pledging event, and for your continued commitment to humanitarian aid to the people of Yemen,” he said. Saudi Arabia was the highest donor at the event, pledging a token $500 million in aid, the exact amount of money Saudi Arabia’s de facto ruler, Crown Prince Mohammed bin Salman, spent on his personal yacht. The United States pledged $225 million, or less than the cost of three of the numerous F-35 fighter jets the US military has purchased from Lockheed Martin.

These numbers also pale in comparison to the value of the arms the United States ships to Saudi Arabia — amounting to at least $3 billion in 2019 — despite calls for a global embargo due to Saudi atrocities in Yemen. Yet the event, the global equivalent of a GoFundMe campaign for Yemen aid, fell $1 billion short of its goal, or roughly the equivalent of only two of the Leonardo da Vinci paintings bin Salman bought for himself in 2017.

El-Tayyab says he is concerned about whether the US aid that was pledged will be sent to Houthi-held areas, where a majority of Yemen’s population lives. “We don’t know if the aid is going to get to north Yemen,” he said. “A major sticking point is what is actually happening to Houthi-held territory. Is the aid getting to where the majority of the country lives?”

Shireen Al-Adeimi, Yemeni-American antiwar activist, board member of Just Foreign Policy, and frequent contributor to In These Times, agreed with El-Tayyab’s explanation for why the coalition was removed from the UN blacklist. According to Al-Adeimi, the UN lives in fear that the very countries responsible for unleashing humanitarian crises will withdraw funding for humanitarian aid. “Anytime the UN has held any kind of fundraiser for Yemen, they go out of their way to thank the coalition countries for whatever aid they pledge,” she says. And indeed, on April 9, Mark Lowcock, the UN’s under-secretary-general for humanitarian affairs and emergency relief coordinator, tweeted, “Thank you to KSA [Kingdom of Saudi Arabia] for announcing another major contribution to humanitarian aid in Yemen! Your generosity will benefit millions of people who need help.” This echoes similar effusive praise he’s given the coalition for its humanitarian donations to Yemen (see here and here).

An April 2018 exchange between Guterres and a reporter at a press event for a Yemen fundraising conference sheds light on this dynamic. The reporter asked Guterres about the event, at which both Saudi Arabia and the United Arab Emirates, also part of the military coalition in Yemen, were significant donors.

“How do you see the contradiction of one country presenting itself as a main donor and a main helper of Yemen while it is striking since three years the country, including civilian areas?” Guterres replied, “This country is giving money to repair what it is destroying. Well, we all know that there is a war, we all know who are the parties to the war, but the two things need to be seen separately. Independently of the fact that there is a war, there are humanitarian obligations that are assumed by countries, and today we were exactly registering a very strong support of the international community to the people of Yemen.”

One could argue that the UN is forced to perform ethical gymnastics, due to the Trump administration’s abrupt withdrawal of tens of millions of dollars in assistance from the United States Agency for International Development (USAID), the World Food Programme’s 50% cut to aid in Houthi-held areas, and threats to close critical UN-run food aid programs in Yemen, all as COVID-19 is battering the country. The UN has no choice, therefore, but to do what any fundraiser must do: cavort with unsavoury donors, and flatter the wealthy in hopes that they will keep the organisation afloat.

But the UN is not just a passive observer of the Yemen war: by shielding the United States and Saudi Arabia from even the most modest political consequences for a war that has unleashed the worst humanitarian crisis in the world, it has used its institutional power to enable this onslaught. In 2015, just six months into the war, Saudi Arabia launched a diplomatic campaign to prevent the UN from launching a human rights investigation, abetted by the silence of the Obama administration. This effort was ultimately successful. What if it had not been: imagine if, more than five years ago, the war had been roundly denounced on the global stage.

Even activists who acknowledge the tragic irony of relying on the perpetrators of a war to provide aid to victims of that war are themselves forced to call on the United States to restore aid. In late May, more than eighty progressive and antiwar organisations signed a letter calling on chairs and ranking members of Congress to “do everything in your power to press USAID to reverse its suspension.” The letter warns, “Millions more are needed, in particular, for emergency stocks of personal protective equipment, ventilators, ICU beds, and other vital supplies for Yemen’s battered health care system.”

Jehan Hakim, who is part of a coalition of activist groups that is fighting to restore this aid, says the effort brings up difficult political questions. “It really feels like a violation of us, calling on this agency [USAID] that is part of the system that is profiting off of this war with arms sales and all this military support.” But, she says, US activists face a stark reality: abrupt withdrawal of aid in the midst of a pandemic will certainly kill numerous Yemenis. “People ask us, ‘Why are you calling on USAID? They’re problematic.’ And I’m like, I know, but what about the people who need the food right now? We’re doing it for the people.”

Unlike the UN, Hakim and her fellow organisers do not flatter the military coalition. And most importantly, they are working to end the war — the root of the suffering, even after the Trump administration in 2019 vetoed an effort to end US participation in the war. “We’re in talks right now with a few other organisations to draft a fresh War Powers Resolution,” says Hakim. “This is the strongest vehicle we have to check US involvement. Without arms, military support, intelligence sharing, and targeting assistance the US is providing, the coalition cannot continue to aggress in Yemen in the same way.”

Sarah Lazare is web editor at In These Times. She comes from a background in independent journalism for publications including the Intercept, the Nation, and Tom Dispatch.

This article was published in Jacobin. Read it here.