The court's order came after the deputy superintendent of the jail where Sarabjit was murdered did not appear in court despite repeated summons. 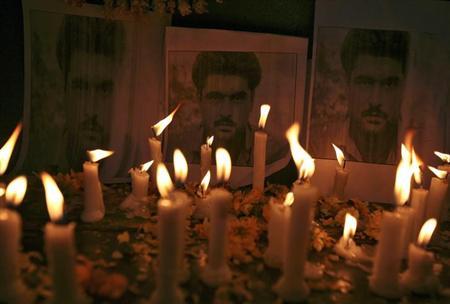 Candles are placed in front of the posters of Sarabjit Singh, who was convicted of spying for India and sentenced to death in Pakistan, during a candle light vigil to pay tribute in Amritsar May 2, 2013. REUTERS/Munish Sharma

Lahore: A Pakistani court has issued a bailable arrest warrant for a top jail official for failing to appear in court in connection to the 2013 murder case of Indian national Sarabjit Singh.

The court’s order came after the deputy superintendent of Kot Lakhpat jail– where Singh was murdered by two inmates – did not appear in court despite repeated summons.

An additional district and sessions judge were yesterday directed by the Lahore police chief to ensure the appearance of the deputy superintendent on February 17.

The judge said there had been ‘little’ progress in Singh’s case.

During the hearing, the judge admonished the jail authorities for not cooperating with the court and issued the bailable arrest warrant for the deputy superintendent.

Two Pakistani death row prisoners – Amir Tamba and Mudassar – had allegedly attacked Singh in the jail resulting in his death.

The one-man judicial commission of Justice Mazhar Ali Akbar Naqvi of the Lahore high court initially investigated Singh’s murder case before the trial kicked off in the sessions court.

Naqvi recorded the statements of 40 witnesses in the case and submitted its report to the government which is yet to make its findings public.

Singh had been sentenced to death for alleged involvement in a string of bombings in 1990. Tamba and Mudassar, in their statements to the commission, confessed to the crime saying they killed Singh to avenge those killed in bomb blasts at Lahore and Faisalabad.

Both Tamba and Mudassar have been indicted in the murder case in the court of additional district and sessions judge Lahore.