New York governor Kathy Hochul said the Indian-born writer was alive and "getting the care he needs." 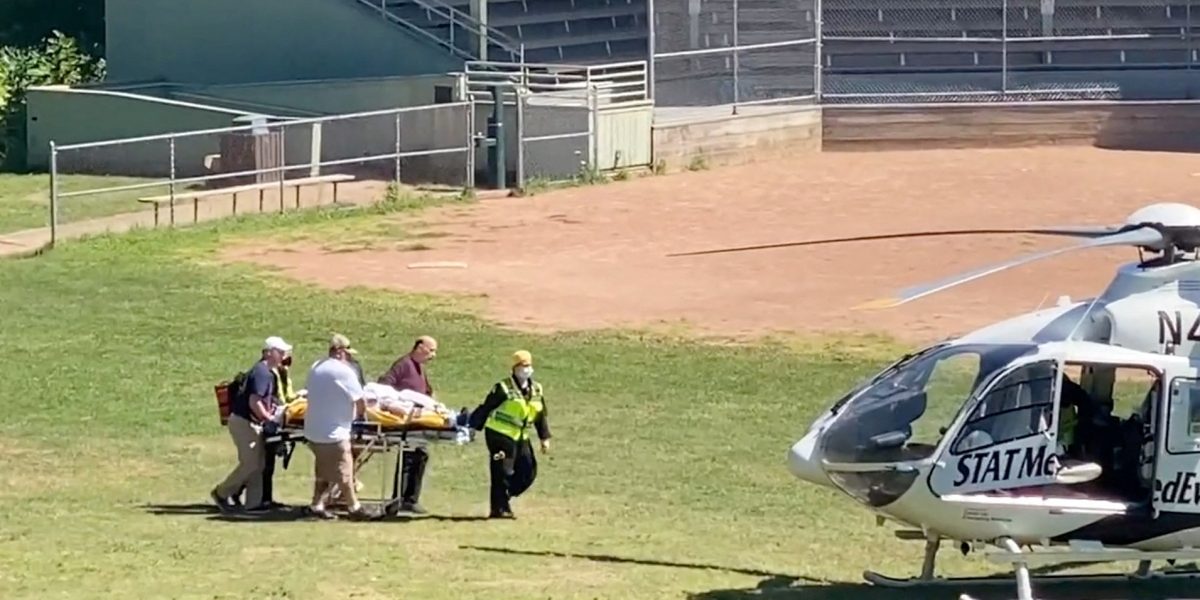 Author Salman Rushdie is transported to a helicopter after he was stabbed on stage before his scheduled speech at the Chautauqua Institution, Chautauqua, New York, US, August 12, 2022, in this screengrab taken from a social media video. Photo: Twitter @HoratioGates3 /via Reuters

New Delhi: Salman Rushdie, the Indian-born novelist who was ordered killed by Iran in 1989 because of his writing, was attacked on stage at an event in New York and suffered an apparent stab wound to the neck, according to New York State Police and an eyewitness.

A man rushed to the stage at the Chautauqua Institution in western New York state and attacked Rushdie as he was being introduced to give a talk on artistic freedom, an eyewitness said. A State Trooper present at the event took the attacker into custody, police said. The attack happened around 11 am local time.

New York governor Kathy Hochul said Rushdie was alive and “getting the care he needs.” Rushdie, 75, was taken by helicopter to a hospital but police said his condition was not yet known.

Police did not give a motive for the attack and it was not clear what kind of weapon was used.

Andrew Wylie, a spokesperson for Rushdie, said in an emailed statement that “Salman is in surgery,” but did not have further details to share.

According to the New York Times, Rita Landman, an endocrinologist, was in the audience and walked on stage to offer assistance. She said that the 75-year-old writer had “multiple stab wounds, including one to the right side of his neck, and that there was a pool of blood under his body”. But she said he appeared to be alive and was not receiving CPR, according to the newspaper.

Rushdie fell to the floor when the man attacked him and was then surrounded by a small group of people who held up his legs, seemingly to send more blood to his upper body. 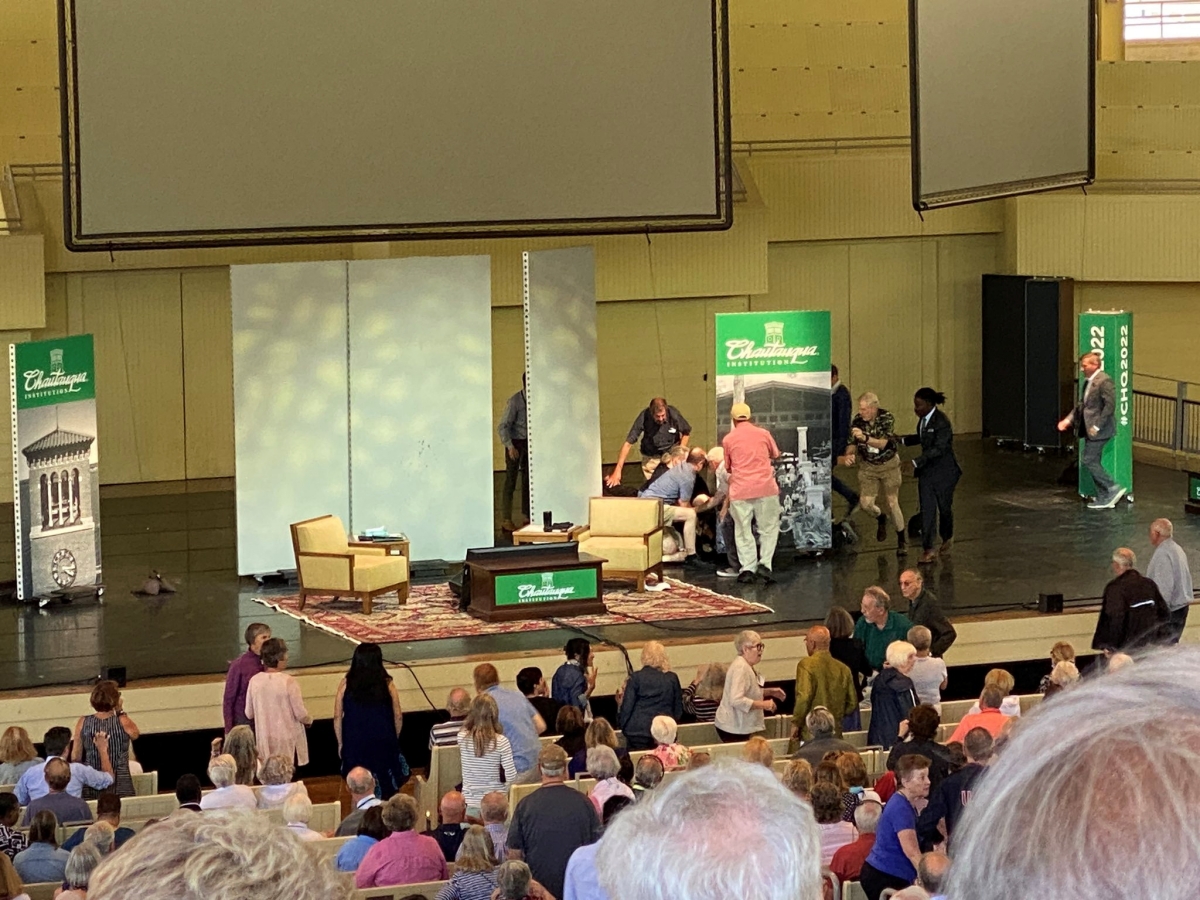 Author Salman Rushdie is helped by people after he was stabbed on stage before his scheduled speech at the Chautauqua Institution, Chautauqua, New York, US, August 12, 2022, in this picture obtained from social media. Photo: Charles Savenor/LOCAL NEWS X/TMX/via Reuters

According to the Buffalo News, Paula Voell said Rushdie was on the ground for “possibly five minutes” after which he was helped walk to the “back of the stage and out of view” by one man on either side.

Rushdie’s interviewer, Henry Reese, was also attacked and received a minor head injury, according to reports.

There were no obvious security checks at the venue, with staff simply checking people’s tickets for admission, the eyewitness who was in the audience said. The Chautauqua Institution declined to comment when asked about security measures.

According to Associated Press, the Chautauqua Institution is about 55 miles southwest of Buffalo in a rural corner of New York and is known for its summertime lecture series. Rushdie has spoken there before, the report said.

The Indian-born was at the institution to take part in a discussion about the US serving as asylum for writers and artists in exile and “as a home for freedom of creative expression,” according to the institution’s website.

The late Ayatollah Ruhollah Khomeini, Iran’s supreme religious leader, pronounced a fatwa, or religious edict, on the writer on February 14, 1989, calling on Muslims to kill Rushdie because of perceived blasphemy against Islam in his fourth novel, The Satanic Verses. He had to live in hiding and under police protection for several years after Khomeini’s fatwa.

The Iranian government said in 1998 it would no longer back the fatwa, and Rushdie has lived relatively openly in recent years. Iranian organizations, however, have raised a bounty worth millions of dollars for Rushdie’s murder.

Iranian organizations, some affiliated with the government, have raised a bounty worth millions of dollars for Rushdie’s murder. And Khomeini’s successor as Supreme Leader, Ayatollah Ali Khamenei, said as late as 2017 that the fatwa was still valid.

The Satanic Verses was banned in many countries, including India.

Rushdie rose to prominence with his Booker Prize-winning 1981 novel Midnight’s Children. He has dual British and American citizenship and has been living in the US since 2000.

Rushdie published a memoir about his life under the fatwa called Joseph Anton, the pseudonym he used while under police protection. His new novel Victory City is due to be published in February.

He remains a fierce critic of religious extremism across the spectrum. He has been critical of oppression and violence in India, including under the Narendra Modi government.

PEN America, an advocacy group for freedom of expression of which Rushdie is a former president, said it was “reeling from shock and horror” on what it called an unprecedented attack on a writer in the United States.

“Salman Rushdie has been targeted for his words for decades but has never flinched nor faltered,” Suzanne Nossel, PEN’s chief executive, said in the statement. Earlier in the morning, Rushdie had emailed her to help with relocating Ukrainian writers seeking refuge, she said.

US Senator Chuck Schumer of New York called it “an attack on freedom of speech and thought.”

Political theorist and author Kancha Ilaiah condemned the attack on Rushdie. “I am deeply shocked to know about the brutal attack on the globally renowned writer Salman Rushdie in New York by forces that have been planning to kill him for a long time. As a writer and columnist myself, I cannot sit silent without condemning such a brutal attack on fellow writers,” Ilaiah said.

“The right-wing intolerant forces have been growing in the world to stop creative writers from doing their job to improve the living conditions of innocent masses. If the writers are attacked like this in public, they think writers would be frightened and would stop writing. This is only their wishful thinking,” Ilaiah added.

Note: This is a developing story. Details will be added as they become available.