Russia-Ukraine War: No Winners and Many Losers as the Balance of Geopolitical Forces Changes

The West presents this confrontation as one between ‘democracy versus autocracy’, many countries, especially from the Global South, are neutral and do not fit neatly into this division.

The major geopolitical tension is the US’s strategy of retaining and increasing global primacy and power. This escalates confrontation with emerging major powers, especially China, and the dissenting ones, Russia and Iran.

The West presents this confrontation as one between ‘democracy versus autocracy’ while ‘others’ see this as an ongoing tussle for the construction of a unipolar world versus a multipolar one. The Western democracies are rooting for a ‘rule-based order’. The “autocracies” – Russia and China – argue for international law-based order. This is a polarised narrative.

Many countries, especially from the Global South, are neutral and do not fit neatly into this division of “democracy versus autocracy”.

The Russian aggression and the US’s response

The Russian aggression on Ukraine is an unacceptable violation of the territorial integrity of a sovereign nation. This act of unilateral war is embedded in the politics of NATO expansionism and the US re-domination of the European Union. The US encouraged schisms within Ukraine since 2014 when they supported the overthrow of a democratically elected government and Russia responded by annexing Crimea.

Then the US signalled that Ukraine would be granted entry into NATO; the civil war in eastern Ukraine was allowed to fester without amicable resolution, and agreements like Minsk I and II were violated. This provoked a Russian offensive.

The US has used the Ukraine war to consolidate the ruptures within NATO, where specific countries like Germany and France were moving towards strategic autonomy. The US has succeeded in this direction. European Union countries have increased defence spending and given military assistance to Ukraine. Finland and Sweden are on the path to joining NATO, which means Russia will again have new militarised borders. The West and some others, including Japan, South Korea and Singapore, have joined the sanctions regime at a great cost of risking energy shortages and food insecurity for millions.

This proxy war has destroyed Ukraine; the UN calculates that 90% of Ukrainians will fall below the poverty line, but identity nationalism is at its peak. Ukraine’s government is run with US aid. The war has caused human security setbacks in Europe, leading to food insecurity, starvation and famine for millions in the most vulnerable countries in Africa.

Macky Sall, President of Senegal and the chairperson of the African Union, blamed Western sanctions for compounding Africa’s food crises and asked that supply lines be freed up. Local residents cross a destroyed bridge as they evacuate from the town of Irpin, after days of heavy shelling on the only escape route used by locals, while Russian troops advance towards the capital, in Irpin, near Kyiv, Ukraine March 7, 2022. Photo: Reuters/Carlos Barria

The civilian, material, ecological damage, hegemonic powers and elites believe this war is beneficial for their long-term interests – without spilling any US blood. The calculation is that this proxy, secret, long and hybrid war will decimate Russia. With such a weakening, Russia’s partners – whether China, India, Central Asia, and others in the global South – will have to take sides and look for alternate partnerships in the proposed democracy versus autocracy cleft line.

The US’s approach to Russia is a repeat of their triumphalism on Soviet disintegration. The independence of Eastern Europe and Soviet disintegration was a result of an unsustainable arms race, the bleeding on account of the Afghan occupation – all of which led to stagnation and unsuccessful reforms in the USSR.

The West wants Ukraine to be a second Afghanistan for Russia. Russia has prepared for this war and for sanctions, after a decade of trying to compromise with NATO. The cost of this war will be long and heavy for the Russian people. China’s economic and military rise is constructed as a major threat by the US to its global primacy and values.

The American strategic focus is great power competition or GPC. In current times the US has targetted Russia but also escalates tensions with China which is its primary threat.

China conceptualises the geostrategic order by terming US hegemonic plans as ‘bloc politics’ and the new alliances like QUAD and AUKUS as ‘exclusive circles’, which it contrasts with Xi’s call for a ‘Global Security Initiative’ and ‘common prosperity’. Xi Jinping is proposing the combination of traditional and non-traditional security and emphasised economic security as a major arm of strategic thinking.

China’s strategic choice was repeated by President Xi on his birthday call to Russian President Vladmir Putin on June 22. China will continue with the outlined strategic and economic plans that enabled it to become a major economic and military power. It needs Russia for energy, technology, military and strategic depth, while neither wants a military alliance with the other.

It would like a ‘peaceful rise’, but as Xi argued in the BRICS meetings, there is an avoidable re-emergence of ‘bloc politics’. China has calculated that if Russia wins this war, it will be a second defeat for the Americans after Afghanistan, and it will damage their aspirations and validation. If Russia loses the war, it’ll become much more dependent on China. So China gains either way. China wants to de-escalate tensions with the US but is firm about Taiwan’s reintegration with China in the future.

Also read: An Ethical View of the Current Geopolitics Behind the War on Ukraine

The US-led West is moving towards a selective deglobalisation where they advocate that international trade follows “friend-shoring” or trade between allies, and isolate others. The freshly minted Indo-Pacific Economic Framework (IPEF) with 13 countries focuses on trade and security but is silent on free trade agreements, lowering barriers, and sharing technology. None of the countries in the IPEF will give up their trade and economic links with China. In fact, the US itself is lowering some tariffs on China, just as China has agreed to more imports from the US.

The sanctions regime is hurting Russia, but China and many countries have drawn lessons from the weaponisation of financial instruments and supply chains. The ruble is currently stable primarily because it is backed by the gold standard. However, the ruble will be volatile as time goes by.

For several years, Russia and China have taken steps by developing their own SWIFT as an alternate financial transfer system. The Chinese are pushing trade with the e-yuan. BRICS countries have engaged and traded in local currencies to some extent. The BRICS countries are thinking of an international reserve and settlement currency as a risk reducer. These steps are not de-dollarisation, but just steps toward risk reduction. Moreover, reserve currencies are managed by the International Monetary Fund (IMF) and the Yuan is already in the basket of globally accepted currencies. To make an alternate system operational requires a long and sustained effort and the ultimate test is the market. 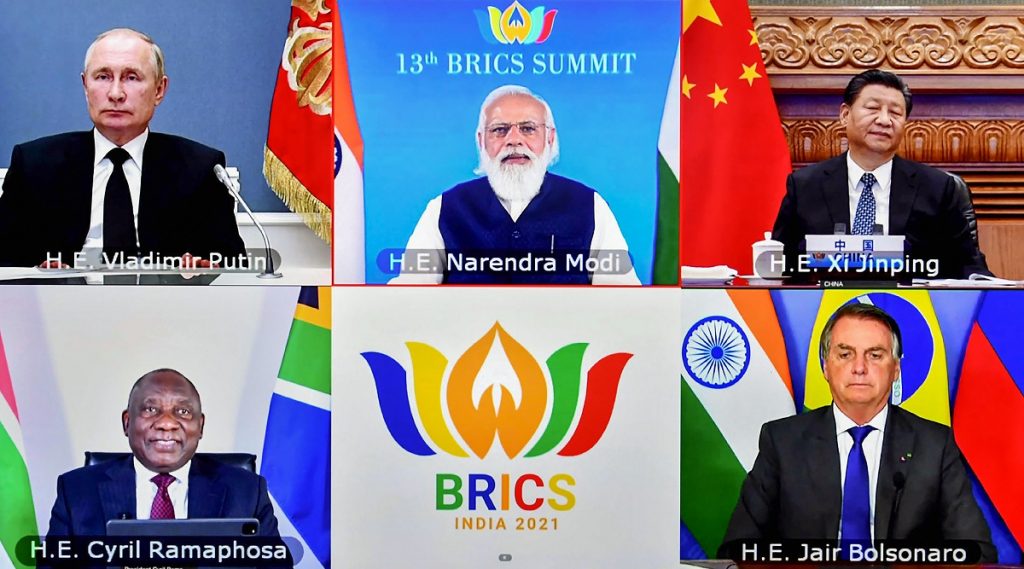 What about the Global South?

The Global South has proved to be an unknown and unshakeable group that has resisted pressure from the West in the changing world order. Several countries of the South voted to condemn the Russian aggression, but subsequently went along to a position similar to that taken by India and other BRICS countries of neutrality. This position is not normative or anything like the earlier non-alignment. It is purely transactional and based on national interest.

The Global South sees the war as a regional one and sanctions as hurting them all. They are wary about the US freezing Russian foreign reserves, given their own record of violating human rights. They are clear that the West’s long-term strategic interests target China. Many in the Global South have gained from their relationship with the US, Europe and China and other emerging countries. They are committed to this gain as opposed to issues of wars in Europe.

In conclusion, a multipolar world is irreversible in the changing world order. The Global South is on the path of strategic neutrality and will not stray into military alliances. China’s economic fundamentals are strong and it will continue to rise and assert itself. Russian links with the West are irreparable in the near future and it will turn to stronger engagements with the Global South and countries like India.

Sadly, there are no winners in this Ukraine war and the losers in this changing militarised world order are ordinary people, the climate, environment, and development with equity. As the strategic and security architecture changes globally, any order that does not consider this is precarious.

Anuradha Chenoy has retired as the Dean and Professor at the School of International Studies, Jawaharlal Nehru University.