The blockade of Ukrainian ports by Russia's Black Sea fleet since the war broke out trapped tens of millions of tonnes of grain and stranded many ships, resulting in a global food crisis. 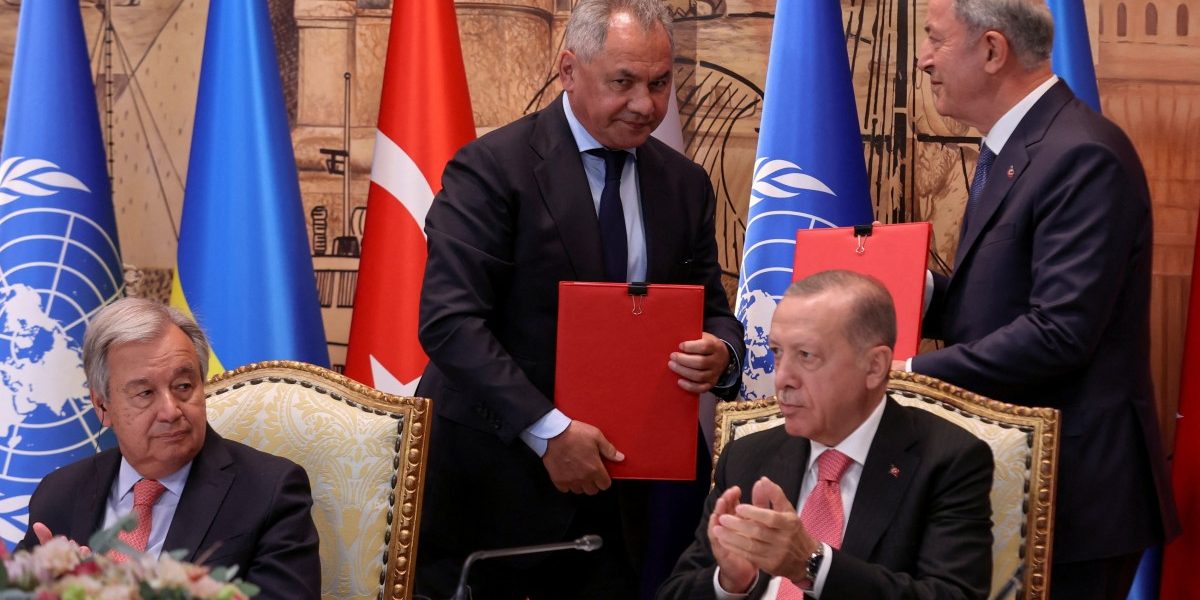 New Delhi: Russia and Ukraine signed a landmark deal in Istanbul on Friday, July 22, to unblock grain exports from Black Sea ports and ease an international food crisis even as the war rages on.

Friday’s deal means around $10 billion worth of grain will be available for sale with roughly 20 million tons of last year’s harvest that can now be exported, Ukrainian President Volodymyr Zelenskiy said.

Meanwhile, the White House announced fresh military support of around $270 million to Kyiv, including $100 million for drones, and is also doing preliminary work on whether to send fighter aircraft, although it said that would not happen in the near term.

Also read: Are We on the Edge of a Food Crisis?

Fighting rages on in Ukraine’s east. In a sign of how far away peace remains, Russian and Ukrainian representatives declined to sit at the same table and avoided shaking hands at the grain agreement ceremony in Istanbul.

Friday’s export deal hopes to avert famine among tens of millions of people in poorer nations by injecting more wheat, sunflower oil, fertiliser and other products into world markets including for humanitarian needs, partly at lower prices.

A blockade of Ukrainian ports by Russia‘s Black Sea fleet, trapping tens of millions of tonnes of grain and stranding many ships, has worsened global supply chain bottlenecks and, along with Western sanctions, stoked food and energy price inflation. 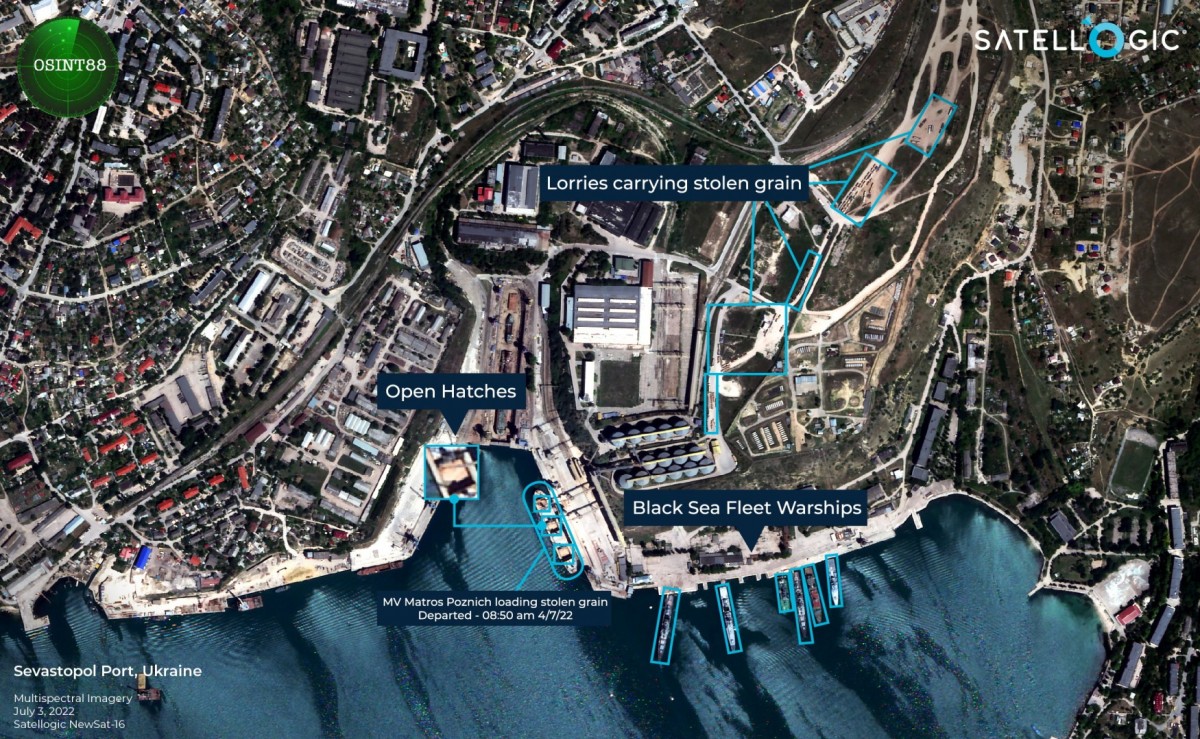 Illustration shows analysis of a satellite image of Sevastopol Port, in Sevastopol, Ukraine July 3, 2022. Imagery by Satellogic and analysis by OSINT-88/Handout via REUTERS.

Moscow has denied responsibility for the crisis, blaming instead sanctions for slowing its own food and fertilizer exports and Ukraine for mining the approaches to its Black Sea ports.

A UN official said a separate pact signed on Friday would smooth such Russian exports and that the United Nations welcomed US and European Union clarifications that their sanctions would not apply to their shipment.

“Russia has taken on the obligations that are clearly spelled out in this document. We will not take advantage of the fact that the ports will be cleared and opened,” Shoigu said on the Rossiya-24 state TV channel.

Ukraine’s infrastructure minister Oleksandr Kubrakov also said that Kyiv does not see a risk of Russian ships attacking the ports as they would be vulnerable to Ukrainian missile strikes.

Senior UN officials, briefing reporters on Friday, said the deal was expected to be fully operational in a few weeks and would restore grain shipments from the three reopened ports to pre-war levels of 5 million tonnes a month.

Safe passage into and out of the ports would be guaranteed in what one official called a “de facto ceasefire” for the ships and facilities covered, they said, although the word “ceasefire” was not in the agreement text.

Though Ukraine has mined nearby offshore areas as part of its defences, Ukrainian pilots would guide ships along safe channels in its territorial waters, they said.

Monitored by a Joint Coordination Center, based in Istanbul, the ships would then transit the Black Sea to Turkey’s Bosphorus strait and proceed to world markets.

“Today, there is a beacon on the Black Sea. A beacon of hope… possibility… and relief in a world that needs it more than ever,” UN Secretary General Antonio Guterres said.

On the wider conflict, Zelensky told the Wall Street Journal there could be no ceasefire without retaking lost lands.

“Society believes that all the territories must be liberated first, and then we can negotiate about what to do and how we could live in the centuries ahead,” he said. 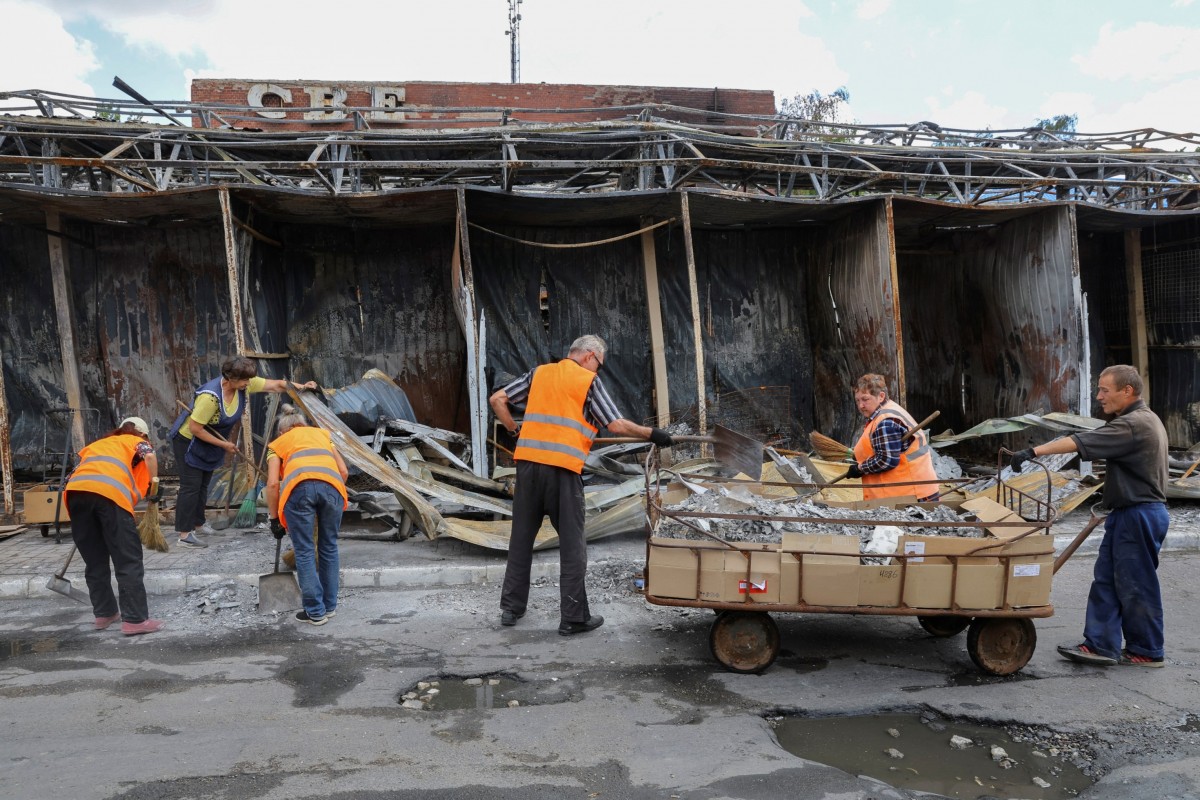 Municipal workers clean a street in front of a destroyed market near a railway station in the course of Ukraine-Russia conflict in Donetsk, Ukraine July 22, 2022. REUTERS/Alexander Ermochenko.

There have been no major breakthroughs on front lines since Russian forces seized the last two Ukrainian-held cities in eastern Luhansk province in late June and early July.

Kyiv hopes that its gradually increasing supply of Western arms, such as US High Mobility Artillery Rocket System (HIMARS), will allow it to recapture lost territories.

A US official said reports of any HIMARS being destroyed were not true. Kyiv called Russia‘s comments “fake”, meant to sap Western support for Ukraine. Reuters could not verify battlefield reports.

The Februrary 24 invasion of Ukraine has caused Europe’s biggest conflict since 1945, forcing millions to flee and turning entire cities to rubble.

The Kremlin says it is engaged in a “special military operation” to demilitarise and “denazify” Ukraine. Both Kyiv and Western nations say the war is an “unprovoked act of aggression”.

Russia‘s military is sustaining hundreds of casualties a day and more than 100 “high-value” Russian targets in Ukraine, including command posts and air-defence sites, have been destroyed, according to a senior US defense official.

Russia classifies military deaths as state secrets even in peacetime and has not updated its official casualty figures frequently during the war. On March 25, it said 1,351 Russian soldiers had been killed.