Russia Looks to 2017 With Uncertainty, Disquiet and Hope

For a population tired of the ups and downs they have seen over the years, 2017 brings with it fears of instability along with aspirations of reform.

Despite all that seemingly good news from 2016, many Russians seem extremely wary about the coming year. Credit: Andrey Naumov/Flickr CC BY-NC-ND 2.0 Despite all that seemingly good news from 2016, many Russians seem extremely wary about the coming year. Credit: Andrey Naumov/Flickr CC BY-NC-ND 2.0

Moscow: The outgoing year shook up the world and rearranged our perceptions in ways that make the usual December forecasts far more fraught with uncertainty and even trepidation than is customary on the eve of a New Year.

But in Moscow the shocks and near-tectonic shifts that rolled through 2016 were received in a more hopeful mood than may be the case in most Western capitals. Many Russians see the past year as a moment when their country began to come in from the cold, overcoming nearly three years of international sanctions and isolation, demonstrating their national unity behind President Vladimir Putin and even rolling back the worst economic recession in almost two decades.

Kremlin policies appear to be triumphing in Syria and even Ukraine, while Moscow’s adversaries in the West seem to be mired in disarray. Most economists believe Russia’s beleaguered economy will return to at least anemic growth in 2017. Putin enjoys public approval ratings of over 80% and voters handed his party a massive victory in last September’s parliamentary elections.

In the biggest surprise, and what seems to many Russians an almost surreal swing of the pendulum, official Washington is now all but accusing the Kremlin of being behind the election of Donald Trump, with some in the US even claiming that Putin is engineering the downfall of the West – a goal the former Soviet Union signally failed to accomplish over 70 years of trying.

“My head is spinning, I simply cannot credit what I’m hearing,” says Olga Kryshtanovskaya, a leading Russian sociologist, who says Americans must be succumbing to the old Soviet reflex of blaming the external enemy for everything that goes wrong. The Kremlin denies – even derides – claims that Russian hackers and “fake news” undermined the US’s 229 year old constitutional democracy and contributed materially to the election of Trump. But some Russian experts offer a more nuanced view that suggests Russia may be just as guilty as other states in taking advantage of the vast opportunities for espionage and disinformation – first revealed by Edward Snowdon – made possible by exploding cyber technologies. 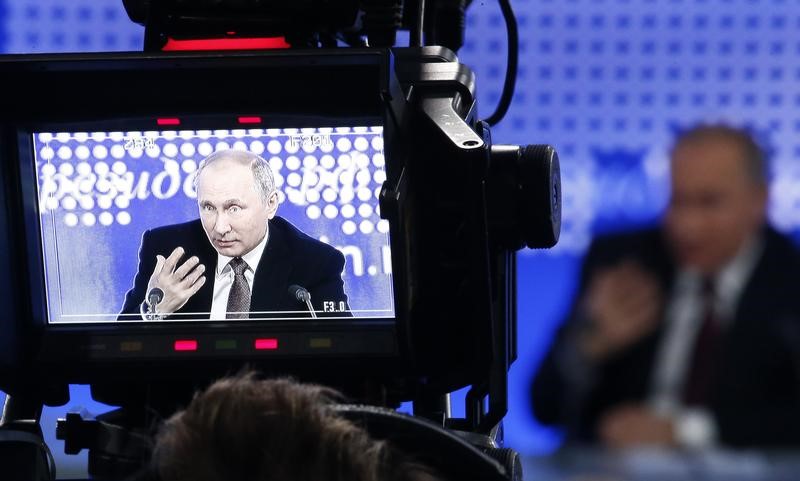 Russian President Vladimir Putin is seen on the viewfinder of a camera during his annual end-of-year news conference in Moscow, Russia, December 23, 2016. Credit: Reuters/Sergei Karpukhin

But others, citing polls that show Putin’s popularity skyrocketing among some groups in the West, argue that Russia might be becoming a magnet for disaffected people, much as the former Soviet Union’s communist ideology appealed in its time.

“Many Russians do appear to believe [that Putin wields great influence in the US] or at least that Trump’s victory was somehow a triumph of Putin’s logic,” says Kryshtanovskaya. “Putin champions anti-globalism, traditional values and putting national interests first. Maybe this is catching on.”

Trump’s victory was greeted with jubilation in Moscow and his nomination of Exxon CEO Rex Tillerson  – who has done business in Russia for over 20 years – was seen as a strong signal that the US-Russia equation is set to change positively in 2017.

But despite all that seemingly good news, many Russians seem extremely wary about the coming year. Most adult Russians have seen roller-coaster ups and downs in the past 25 years, from the harrowing collapse of the superstate of their birth, the USSR, to a decade of economic despair and social decay, to several years of revival under Putin that came to a screeching halt amid economic crisis and global condemnation following the annexation of Crimea in 2014. There is no experience of stable good times in Russia and polls suggest most people are dubious that lasting improvements can even occur.

“There is nothing to be optimistic about. We are racing forward into the unknown, but our understanding lags far behind fast-moving events,” says Yuly Nisnevich, a political scientist at the Higher School of Economics in Moscow. “I don’t see any positive changes, only words.”

Yet there are reasons to believe that Putin, who has consolidated his leadership through sweeping personnel changes and is presently at the height of his powers, might decide to expend his political capital by implementing long-needed structural reforms to diversify the economy, stimulate small business and wean Russia from its dependence on oil and gas exports.

“Putin is in a position to move wherever he wants right now,” says Nikolai Petrov, a political scientist. “He faces re-election in 2018, but he has this window of opportunity in which he can put in place real changes without fear of elite resistance. That would cement his legacy and it’s a programme he’s often said he wants to enact. The year to do that is 2017.”

Even if Russia returns to economic growth next year and oil prices – Russia’s main source of foreign exchange – rebound a bit, there seems little hope of returning to the rapid growth of the past decade that lifted millions of Russians out of poverty and established Putin’s popularity, at least not without the kind of sweeping reforms Putin has talked about but so far failed to initiate.

But economic reforms would be painful, at least in the short term, and would hit most Russians at a time when they are already suffering a fall in living standards, cutbacks in social services and narrowing of employment opportunities. Despite a few outbursts of protest, Russian society has been surprisingly inert over the past three difficult years. But the big question is: how long will that continue?

“Russians aren’t pleased with the situation and don’t admire their government – even if Putin himself is popular – but, the thing is, they see no alternative,” says Alexei Makarkin, deputy director of the independent Center for Political Technologies in Moscow. “Hard to say when this will change.”

On the international scene Russians have been stunned – like everyone else – but also encouraged by the earthshaking upsets suffered by Western establishments, such as last June’s Brexit  vote and, of course, the Trump’s victory in the US. With a wave of contentious elections coming up in key European countries such as France, Germany and the Netherlands, there is a sense in Moscow that the tidal wave of radical change might keep rolling on in 2017.

There are certainly feelings of schadenfreude among Russians at the spectacle of disarray striking the same Western elites who were so recently admonishing, sanctioning and isolating Moscow. But there is also a hope that more Russia-friendly governments may come to power in the West that might be inclined to negotiate new terms of coexistence with Russia. And, for the first time since the end of the Cold War, there is considerable discussion in Moscow about what a new “grand bargain” with the West, particularly the US, might look like.

“Russia’s positions definitely look stronger in the world. The West tried to pressure us in various ways and those attempts have failed,” says Alexei Mukhin, director of the independent Center for Political Information in Moscow. “But we shouldn’t let ourselves get carried away. There’s no reason to think that, Trump or no Trump, the geopolitical tensions and information warfare will suddenly disappear. Our best hope is that the worst can be avoided and we will make it through another year.”