'Rioters Won't Have a Place in the Country': As Unrest Continues, Iranian Army Warns Protesters

Some of the worst unrest has been in areas home to minority ethnic groups with long-standing grievances against the state, including Sistan-Baluchistan and Kurdish regions. 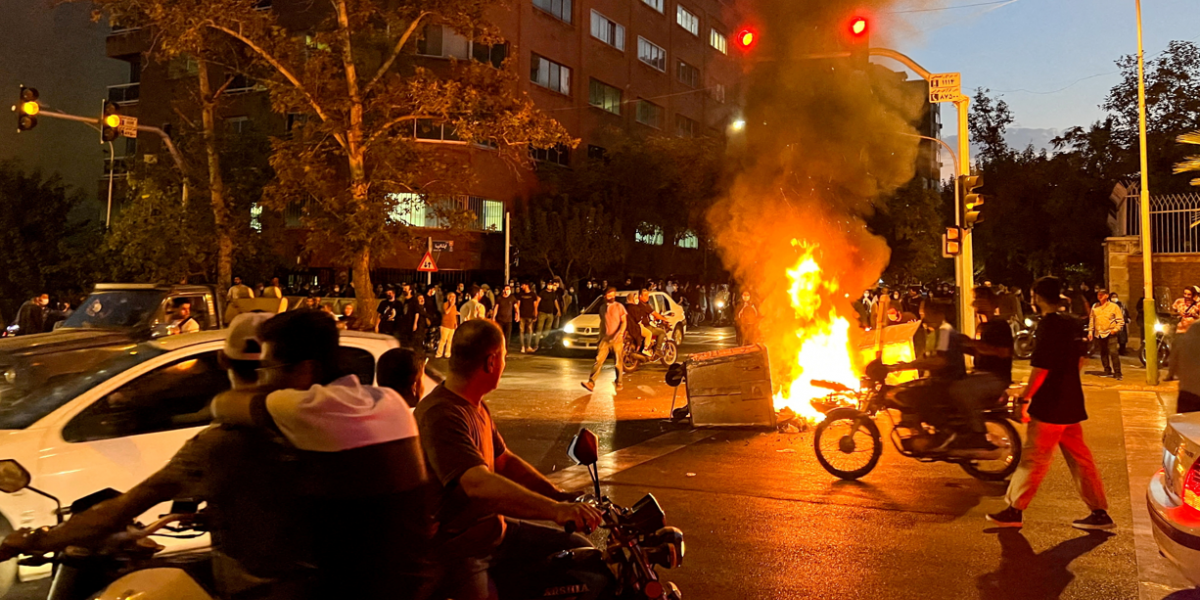 FILE PHOTO: A police motorcycle burns during a protest over the death of Mahsa Amini, a woman who died after being arrested by the Islamic republic's "morality police", in Tehran, Iran September 19, 2022. WANA (West Asia News Agency) via REUTERS//File Photo

Dubai: Iran’s Army Ground Forces Commander said on Wednesday that “rioters” would have no place in the Islamic Republic if the country’s Supreme Leader Ayatollah Ali Khamenei ordered a tougher crackdown on nationwide protests, the semi-official Mehr news agency reported.

” … should he decide to deal with them, rioters will no longer have a place in the country,” Brigadier General Kiumars Heydari said.

Anti-government demonstrations erupted in September after the death of a Kurdish woman, Mahsa Amini, who had been detained by morality police for allegedly flouting the Islamic Republic’s strict dress code imposed on women.

The protests quickly turned into a popular revolt, with people ranging from students to doctors to lawyers to workers to athletes taking part.

Heydari was speaking 40 days after bloodshed in the mostly Sunni town of Zahedan, which has become a flashpoint in the protests.

Amnesty International said security forces killed at least 66 people there on September 30. Authorities in Zahedan sacked the police chief and the head of a police station near where the killings took place.

Iran has executed two Baluch militants convicted of “terrorism” charges dating back to about 2016, the semi-official news agency ILNA reported on Wednesday, in a move that may raise tensions further in volatile Sistan-Baluchistan province, where Zahedan is located.

The Baluch minority, estimated to number up to 2 million people, has faced discrimination and repression for decades, according to human rights groups.

Some of the worst unrest has been in areas home to minority ethnic groups with long-standing grievances against the state, including Sistan-Baluchistan and Kurdish regions.

On Wednesday, shopkeepers in some Kurdish cities went on strike to show their respect to the people who were killed in Zahedan, Kurdish rights group Hengaw said.

Shopkeepers in the market town of Valiasr, in Tehran province, also closed their businesses to mark the 40th day since the killings took place, according to HRANA news agency.

The Basij militia and other security forces have taken tough measures hoping to suppress the unrest but the fury has not eased.

While past demonstrations have focused on election results or economic hardships, the current protesters seem determined to secure an entirely new political order in a country where the clerical establishment has ruled since the 1979 revolution.

In an ongoing act of resistance, videos posted on Twitter under the hashtag of #TurbanTossing show Iranians sneaking up behind clerics and knocking turbans off their heads.

According to the Iranian human rights group Hengaw, schoolgirls in city of Qorveh in northwest Iran, poured into the streets with slogans and asked other Iranians to join them.