The ultra long-range flight from New York to Sydney was 19 hours in the air. New Delhi: The longest non-stop passenger flight touched down in Australia on Sunday morning after more than 19 hours in the air, a milestone journey from New York that Qantas hopes to parlay into commercial success.

The direct flight from New York to Sydney in the first of three “ultra long-haul” journeys that the airline has planned for this year. The national flag carrier is operating the test flights as it weighs a rollout of regular services on marathon routes from the United States and Britain to Australia.

According to reports, just 49 people travelled on the Boeing 787-9 to minimise the weight on board and give the plane sufficient fuel range to travel more than 16,000 kilometres (9,500 miles) without re-fuelling.

Qantas CEO Alan Joyce called it “a really historic moment” for both the airline and world aviation.

“This is the first of three test flights that are going to come up with recommendations about how we manage pilot fatigue (and) how we actually manage passenger jetlag,” he told reporters after arriving in Sydney.

“After 19 hours on this flight, I think we’ve gotten this right. It feels like we’ve been on a flight a lot shorter than that.”

Qantas partnered with two Australian universities to monitor how jetlag affected the health of passengers and crew members as they crossed multiple time zones. After boarding the flight, passengers set their watches to Sydney time and were kept awake until night fell in eastern Australia with lighting, exercise, caffeine and a spicy meal.

Also read: The Aviation Sector’s Rampant Growth Must Be Reined In

Six hours later, they were served a high-carbohydrate meal, told to avoid screens, and the lights were dimmed to encourage them to sleep through the night.

Professor Marie Carroll, a researcher from Sydney University who conducted the experiment, told AFP that she expected the innovative approach would result in “absolutely minimal” jetlag. “I expect that they will have a normal day today and a normal night’s sleep tonight,” she said, adding that she felt “amazingly good” considering the flight time.

The four pilots on board – who rotated between flying duties – also wore devices that tracked their brain waves and alertness.

The Australian and International Pilots Association, which represents Qantas pilots, has raised concerns about whether pilots will get enough quality rest during ultra long-range flights to maintain peak performance. It has called for a “scientific long-term study” into the impacts on crews.

The airline says the test journeys are just one facet of the work it is doing to ensure the flights are operated safely.

Qantas last year introduced the first direct service from the western Australian city of Perth to London, with the 17-hour journey one of the longest passenger flights in the world.

Qantas’s ultra long-range flight plans come even as the United Nation’s is trying to push a global deal to curb carbon emissions released by the aviation industry. The plan took centre stage at the UN International Civil Aviation Organisation’s (ICAO) triennial assembly that began in Montreal on September 24.

Known as the Carbon Offsetting and Reduction Scheme for International Aviation (CORSIA), the plan is the first of its kind for a single industry. It is a medium-term scheme to help airlines avoid adding to their net emissions from 2020. Overall carbon emissions hit record highs last year.

In 2016, ICAO brokered the first global industrial climate initiative with a medium-term scheme to help airlines avoid adding to their net emissions from 2020.

Airlines, which are facing public protests over the issue, have urged the ICAO to commit now to setting longer-term goals to reduce emissions at its 2022 assembly. The organisation cannot impose regulations but sets standards that are approved by its 193 member countries.

“It is possible at the same time to fly and to reduce our carbon footprint,” said International Air Transport Association (IATA) director general Alexandre de Juniac, on a conference call with reporters. “Flying is not the enemy.”

Commercial flying accounts for 2.5% of carbon emissions. With passenger numbers forecast to double to 8.2 billion by 2037, experts say emissions will rise if no action is taken.

The United States, which quit the Paris accord in 2017, backs the UN-negotiated CORSIA, which is supported by most airlines and would cap rising aviation emissions at 2020 levels through the purchase of carbon offsets.

However, the US’s support is tied to other major aviation countries also backing the plan and a guarantee that CORSIA would prevent airlines from being subjected to separate and more costly carbon tax schemes by individual countries, a US state department official told Reuters.

At the ICAO’s assembly, teenage activist Greta Thunberg, who inspired a “flight-shaming” movement against air travel, led a protest.

Thunberg sailed across the Atlantic to the US from Britain in a zero-carbon emissions boat to protest air travel emissions, and she denounced world leaders at the UN Climate Action summit. She has inspired millions of young people to take to the streets over climate change since starting solitary weekly protests outside Swedish parliament a year ago. 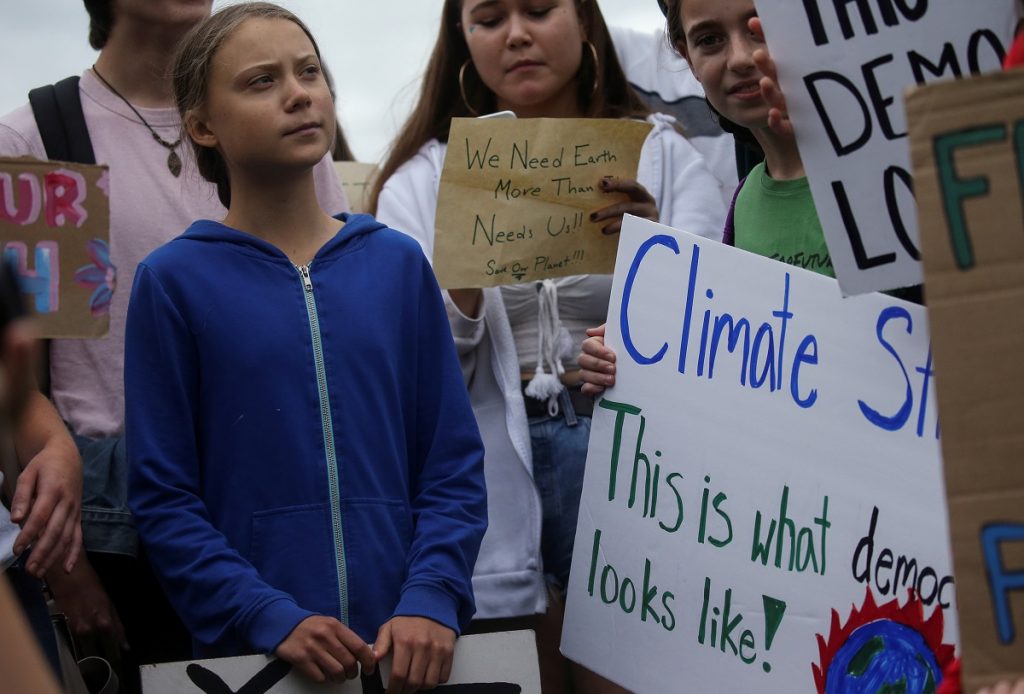 Europe wants to continue its own plan

Europe, meanwhile, wants to keep its right to run separate emissions schemes. “We support CORSIA being a first step, a minimum at this stage,” said Pascal Canfin, chair of the environment committee of the European Parliament.

“But we believe our sovereignty allows us to be more ambitious if we wish to be so, and this is something that all ICAO members should respect,” Canfin said.

However, EU delegates were criticised for failing to raise meaningful objections to CORSIA as it could interfere with Europe’s own emissions trading scheme (ETS).

According to Climate Home News, transport and environment expert Andrew Murphy said the UN offsetting scheme will allow airlines to “go on growing their emissions” while paying others for cheap offsets. “In a world where every sector needs to reach zero emissions, the sums don’t add up,” he said.

The website reported that while CORSIA requires airlines to make payments to offsetting schemes around the world, like forestry projects but the ETS is a “market-based mechanism tied to a carbon price that can go up and down”.

New analysis released in September also suggested that if the EU relies solely on CORSIA, aviation emissions would increase by 683 million tonnes of CO2 over the next decade.

China and Russia argued that the ICAO proposal would unfairly penalise emerging and developing countries because it raises costs. China has one of the world’s fastest-growing aviation systems and its participation in CORSIA’s first phase from 2021 is seen as critical for the deal.

“Given the difference among countries in development stage, historical responsibility and coping capability, the ‘one-size-fits-all’ approach for CORSIA implementation orchestrated by developed countries is a de facto reversion to the law of the jungle,” the country said in a paper released ahead of the ICAO assembly.

While China is a major source of emissions now, its relatively recent growth means its cumulative share of emissions is well below that of the US or Europe.

(With inputs from PTI, Reuters)