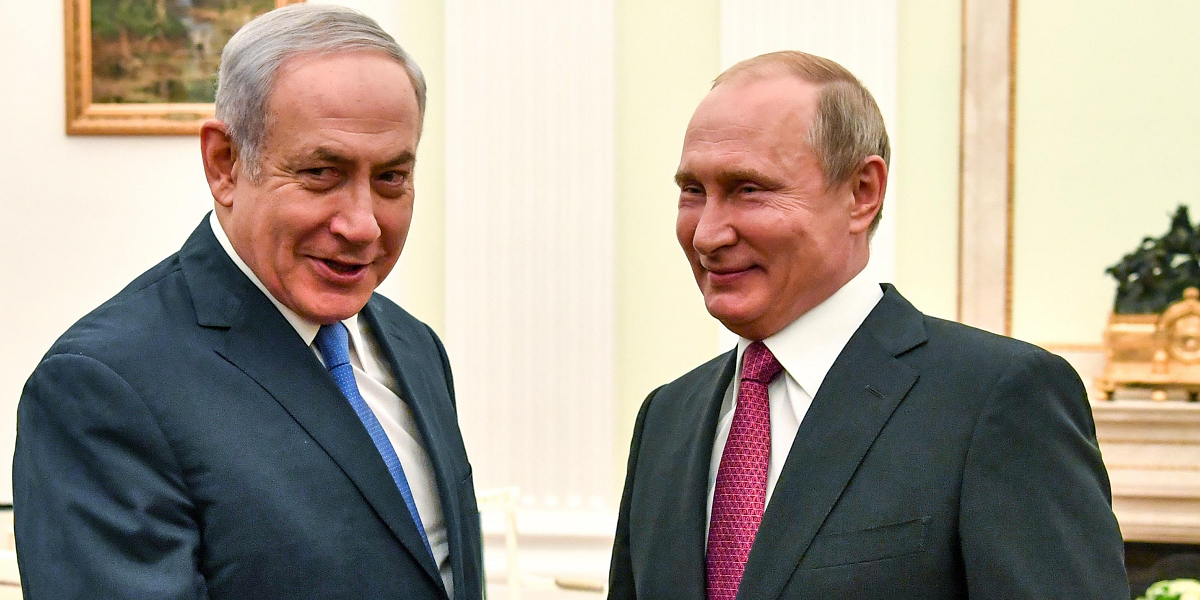 London: During the recent Israeli general election campaign, Donald Trump brazenly tipped the scales in favor of incumbent Benjamin Netanyahu against challenger Benny Gantz. On the eve of the Israeli prime minister’s March 25 visit to Washington, the US president endorsed Israel’s annexation of Syria’s Golan Heights in violation of United Nations resolutions. Netanyahu hailed this as “a miracle.” Then, Trump topped this dramatic move by declaring the Islamic Revolutionary Guard Corp of Iran, a sworn enemy of Israel, a terrorist organisation a day before the April 9 polling date.

In between, Russian President Vladimir Putin provided Netanyahu with an electoral gift that captured the public’s imagination. Following his April 4 meeting with Putin in Moscow, Netanyahu announced that the remains of Sergeant Zachary Baumel, missing in action in Syria since 1982, had been returned to Israel. In a country where conscription applies to all Jewish citizens with a few minor exemptions, the news had personal resonance for nearly 80% of the population.

Trump’s announcement on the IRGC caused concern in the Kremlin. Since September 2015, the Russian military in Syria has coordinated activities with its Syrian counterpart, which has become increasingly dependent on the logistical, technical and training support of the IRGC.

Putin has managed to maintain cordial relations with arch-enemies Iran and Israel simultaneously by depending on different sets of pillars. As for Israel, the treatment of Jews in contemporary and historical Russia is a major element. Equally significant are Putin’s personal views on Judaism and friendly relations with leading Jewish business people and officials.

In the case of Iran, geopolitical and economic interests are primary factors. As littoral states of the inland Caspian Sea, Russia and Iran share fluvial borders. Endowed with huge oil and natural gas deposits, they have a common interest in assuring robust prices for these commodities. 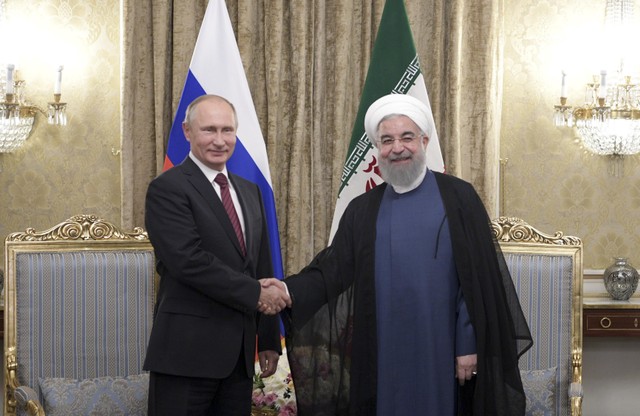 In his drive to regain the influence that the Soviet Union had in the Middle East during the Cold War, Putin has come to value friendship with the Islamic Republic of Iran, which broke away from the American orbit more than 40 years ago.

The Kremlin’s friendship with this regime, which maintained a strategic alliance with Syria since its inception, acquired greater prominence after Russia lost its naval facilities at the Libyan port of Benghazi in the wake of Muammar Gaddafi’s downfall in 2011. That reduced its naval access to Syria’s Latakia port in the Eastern Mediterranean.

The outbreak of civil war in Syria that threatened the regime of President Bashar al-Assad brought Russia and Iran together as his strong supporters.

Also Read: 40 Years After the Revolution, All Eyes Are on Iran Again

Moscow’s friendly relations with Tehran began in 1995 when Russian President Boris Yeltsin agreed to build a civilian nuclear power plant at Bushehr under the supervision of the International Atomic Energy Agency. Only in 2010 did the Russians make this plant operational.

During those 15 years, there were two developments – one was defence cooperation between Iran and Russia; the other was demographic change in Israel. In 2007, the Kremlin signed a $800 million contract to supply Tehran with advanced anti-aircraft S-300 missiles. That was two years after Putin became the first Russian president to visit Israel. By then, the influx of Soviet Jews into Israel had made Russian the third most widely spoken first language after Hebrew and Arabic. On the national security front, Israeli Prime Minister Ehud Olmert feared Iran would deploy the missiles to safeguard its nuclear facilities, thus depriving his country of the option of bombing these sites.

It was left to Netanyahu, who became prime minister in 2009, to make a secret dash by private jet to Moscow to pressure President Dmitry Medvedev to cancel the missile deal. In September 2010, the Kremlin put its defensive missile contract on hold, citing the UN Security Council resolution passed in June, imposing an arms embargo on Tehran. Delivery of an improved version of S-300 missiles ensued only after the Security Council endorsed Iran’s denuclearisation deal with its five permanent members and Germany in July 2015.

Meanwhile, during his second visit to Israel in 2012, Putin inaugurated the Victory Monument in Netanya, commemorating the sacrifices of the Soviet military on behalf of Jews during World War II. “The Jewish Holocaust was the most shameful and dark event in human history, and the Soviet Army was the one who crushed the head of the Nazi monster,” he said. “This amazing monument strengthens the respect I feel towards to the Jewish people and the State of Israel.”

Since then, personal relations between Putin and Netanyahu have warmed. Tellingly, Israel abstained in a UN General Assembly resolution in March 2014 condemning Russia for its annexation of Crimea. Soon after, Israel agreed to installation of an encrypted communications line between the offices of Netanyahu and Putin. On the popular level, Russians and Israelis have increased person-to-person contacts since 2008, when visa-free travel was introduced. There are about 60 flights a week between Tel Aviv and Moscow.

In the Syrian civil war, Damascus gave the Russian Navy indefinite use of its Hmeimim Airport near Latakia free of charge, according to the 2015 Russian-Syrian treaty. Soon after, Netanyahu flew to Moscow to confer with Putin. But nothing changed. Putin reaffirmed his staunch backing for Assad by sending Russian warplanes to its Syrian base and bolstering Syria’s depleted weapons arsenal.

To avoid accidental air clashes between Israeli and Russian warplanes, the governments established a de-confliction hotline between the Kirya command center in Tel Aviv and the Russian military base at Hmeimim. Netanyahu pressed Putin to end or at least reduce Iran’s involvement in Syria. Putin was in no position to oblige, however.

Iran and Syria had signed a mutual defence pact in 2006. “Iran considers Syria’s security its own security, and we consider our defence capabilities to be those of Syria,” declared Iran’s defence minister General Mostafa Mohammad Najjar. No details were disclosed. 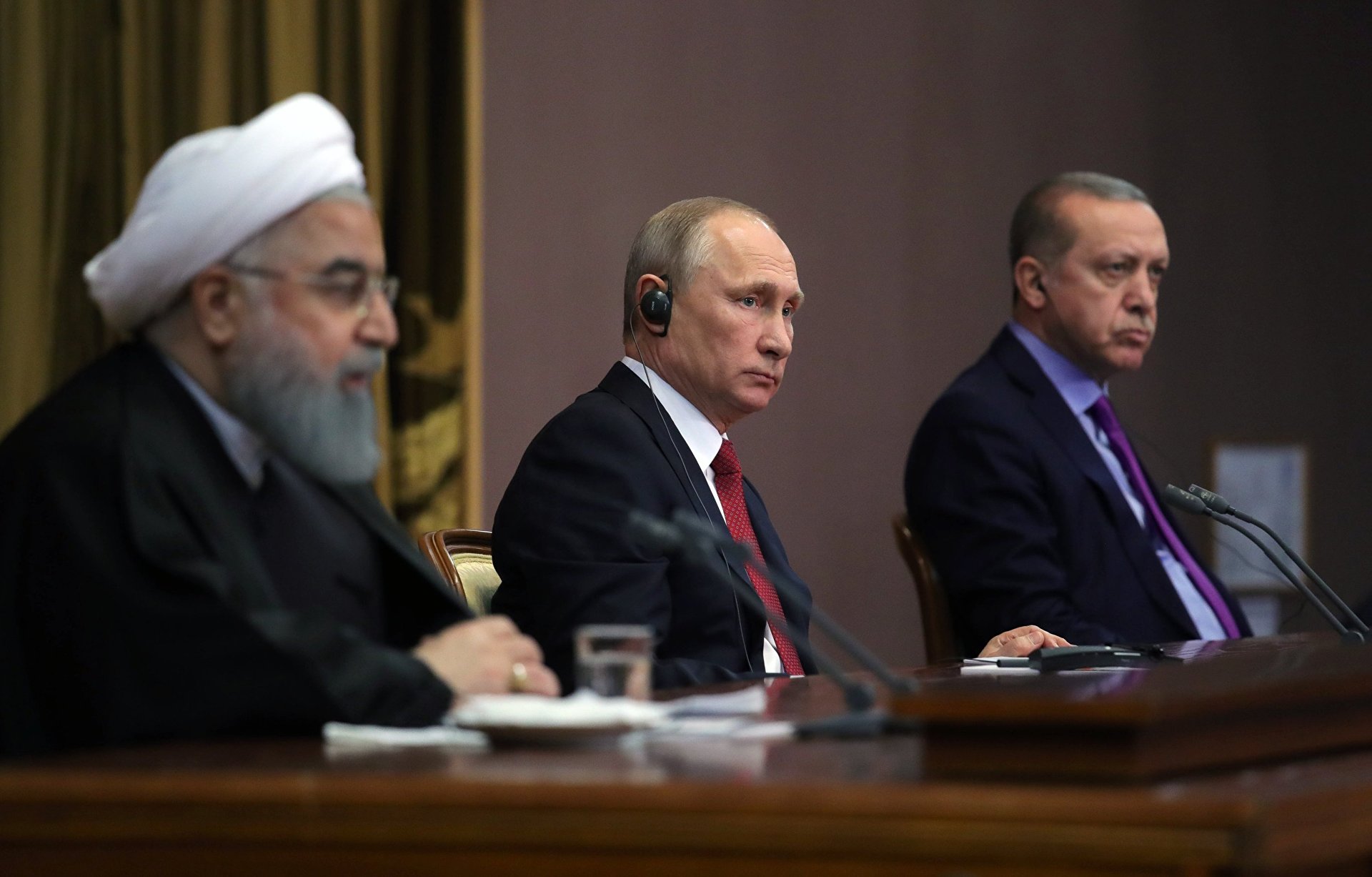 A three-way summit on Wednesday between the leaders of Russia, Iran and Turkey has produced decisive steps toward ending the bloodshed in Syria. Credit: Reuters

A striking example of Putin’s acrobatic diplomatic nimbleness came on the eve of the Putin-Trump summit in Helsinki in 2018. Netanyahu flew to Moscow on July 11 to urge Putin on removal of Iranian forces from post-war Syria. Reports suggest Putin gave him a patient hearing. Putin’s Sphinx-like expression during one-on-one meetings left his interlocutor wondering. The next day, however, Putin met with Ali Akbar Velayati, chief foreign policy adviser to Iran’s Supreme Leader Ayatollah Ali Khamenei. While handing letters of Khamenei and Iran’s President Hassan Rouhani to Putin, Velayati hailed Tehran’s links with Moscow as “strategic.”

The next month, during the Iranian defence minister’s visit to Damascus, Iran and Syria signed an agreement to enhance military and defense cooperation, according to the Tasnim News Agency, which is close to the IRGC. Again, details were missing.

That had not been the case during four rounds of talks Putin held with Rouhani and Recep Tayyip Erdoğan, presidents of Iran and Turkey, since 2017 in Sochi. Their declared aim: finding a political solution to end Syria’s long-running civil war.

At the most recent gathering in February, Putin urged Rouhani and Erdoğan, pursuing different agendas, to cooperate on bringing the conflict to an end. A glimmer of hope came on April 8 when after meeting Erdoğan, Putin said that their countries – in coordination with the Syrian government, the opposition and the UN – were ready for a committee, 150 members strong, to draft a new constitution for Syria.

Putin may have switched his skills from tightrope walking to jugglery by keeping four balls in the air – Israel, Syria, Iran and Turkey.

This article has been republished from Yale Global Online. Read the original here.