This was part of a protest against Macron's defence of showing cartoons of Prophet Muhammad. 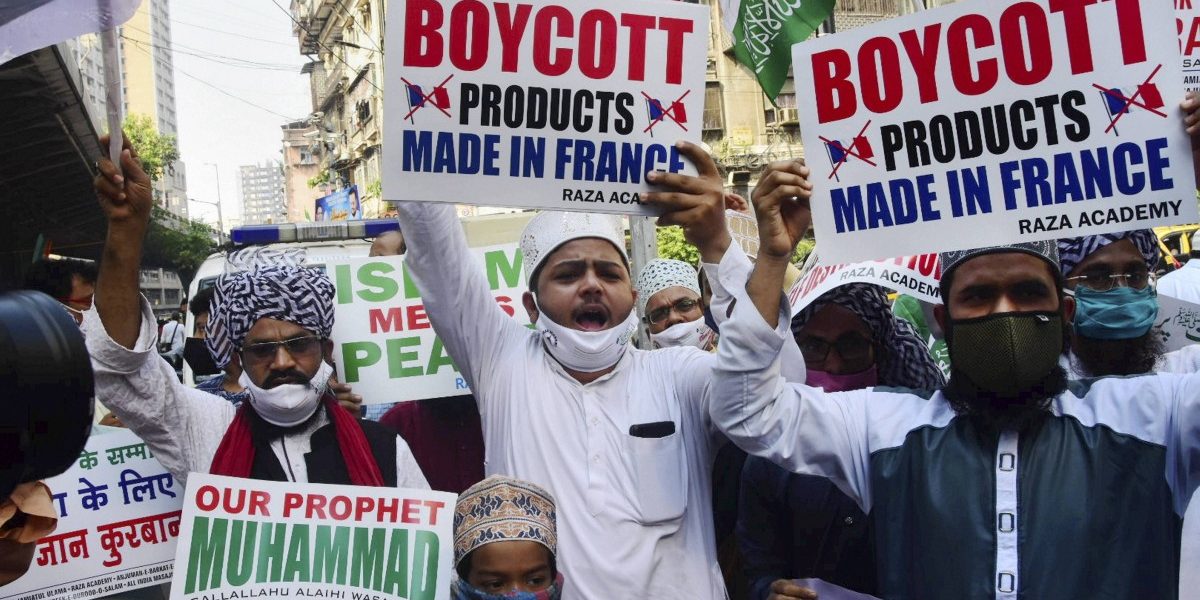 Raza Academy and other Muslim Organisations during a protest against French President Emmanuel Macron and publishing of caricatures of Prophet Muhammad. Photo: PTI

Mumbai: Posters of French President Emmanuel Macron were found pasted on a busy road in south Mumbai and were later removed by the police, an official said on Friday.

Pedestrians and motorists in the Bhendi Bazaar area spotted hundreds of posters of Macron, who is facing criticism from Muslim countries over a cartoon row in France, pasted on the Mohammed Ali Road under JJ flyover on Thursday evening, the official said

A video also surfaced on social media in which vehicles can be seen driving over the posters.

Mumbai Police spokesperson S. Chaitanya confirmed the incident and said the posters were promptly removed by the Pydhonie police after getting information about them.

No case has been registered in this regard so far, another official said.

In series of violence events in France, an attacker armed with a knife killed three people at a church in the city of Nice on Thursday. On October 16, a French schoolteacher named Samuel Paty was beheaded for allegedly showing cartoons of Prophet Mohammed in his class. The suspect, a Chechen-origin teen, was shot by the French police.

Several Muslim-majority countries have denounced remarks by French officials, including President Emmanuel Macron, defending the use of cartoons of the Prophet Mohammad in a French school classroom. The caricatures are seen as blasphemous by Muslims.

Leaders including Turkey’s Recep Tayyip Erdogan and Pakistan’s Imran Khan have lashed out at Macron. Most recently, Malaysia’s former premier Mahathir Mohamad said on Thursday Muslims have a right to “kill millions of French people for the massacres of the past” but he did not approve of the killing of a French teacher over his use of cartoons of the Prophet.

India on Wednesday had strongly deplored the personal attacks against French President Emmanuel Macron following his tough stance on radical Islam, calling it a violation of the most basic standards of international discourse.

In a strongly-worded statement, the Ministry of External Affairs (MEA) had also condemned the brutal terrorist attack that took the life of a French teacher in a gruesome manner and asserted that there is no justification for terrorism for any reason or under any circumstance.

Prime Minister Narendra Modi strongly condemned on Thursday the recent terrorist attacks in France, including the heinous attack inside a church in Nice, and asserted that India stands with the country in the fight against terrorism.