Photo Essay | West Bank: How Many Times Can the Army Destroy a Village? 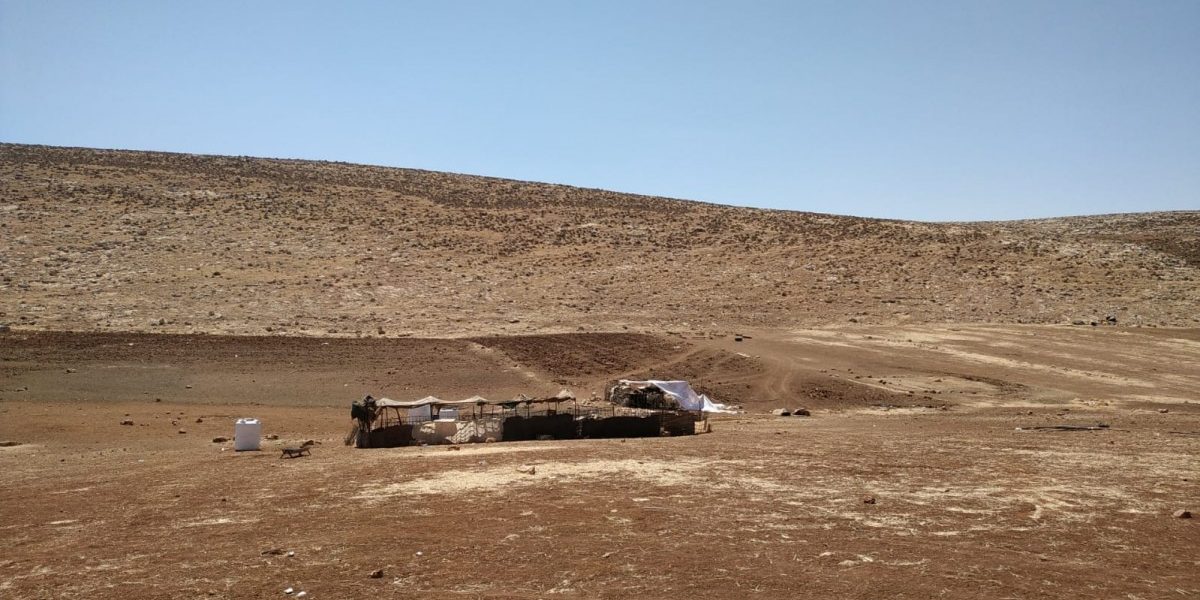 West Bank: For miles around Ras at-Tin, there is little but rocks, empty hills, yellow grass, and a few passing clouds, except for a dusty rock quarry about two miles to the west named for the settlement Kochav Hashahar. The closest settler outpost is the ironically named Malachei Hashalom, “Angels of Peace”, the tormenters of Ein Rashshash. Sometimes, in their spare time, they also harass the people of Ras at-Tin – a small community of Bedouin shepherds, about 120 souls, leading their lives, hurting no one. Lots of children. Lots of sheep. Lots of fiery sun. 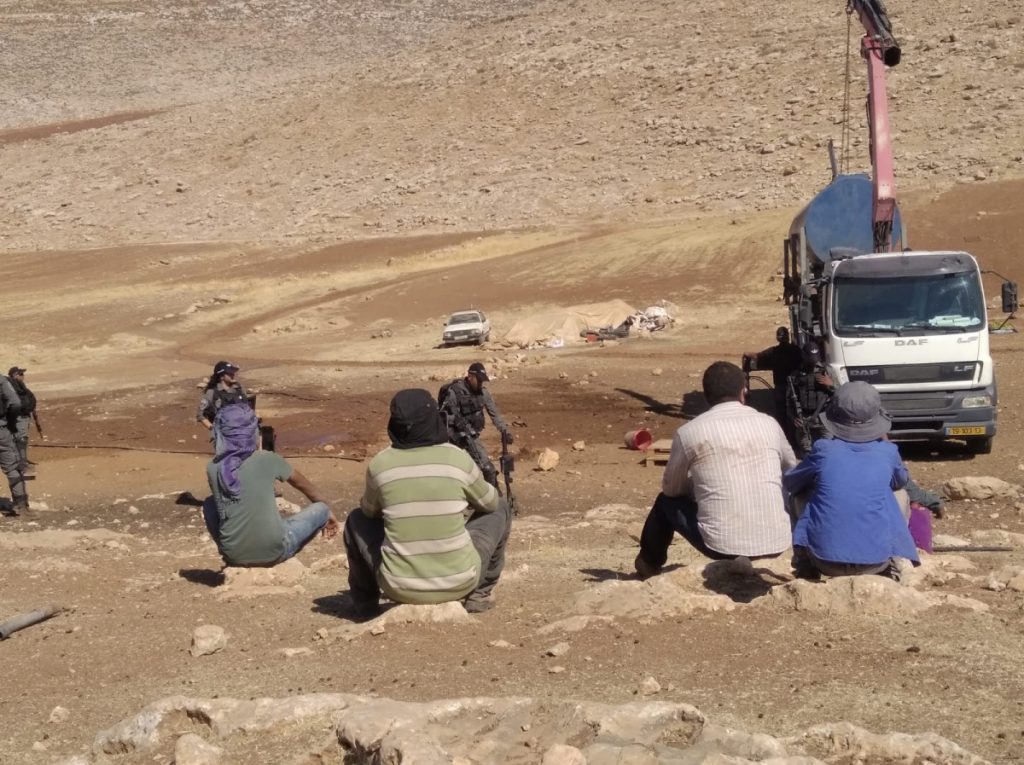 Some days ago, they received a visit from the army or the Civil Administration (it’s the same thing). The officer told them there were no problems, they had nothing to worry about. Then, at dawn on July 14, soldiers came with their cranes and trucks and other devilish devices and confiscated everything these people had.

There were seven large water tanks (they have to buy water and bring it in tankers); all were taken away. First, however, the soldiers poured out the water onto the rocks and sand. The children, watching this, were crying. Long thirsty hours went by before the shepherds were able to fetch more water. Tents and sheep-pens were also destroyed. Each water tank costs 7,000 shekels, a huge sum for a community of subsistence shepherds. 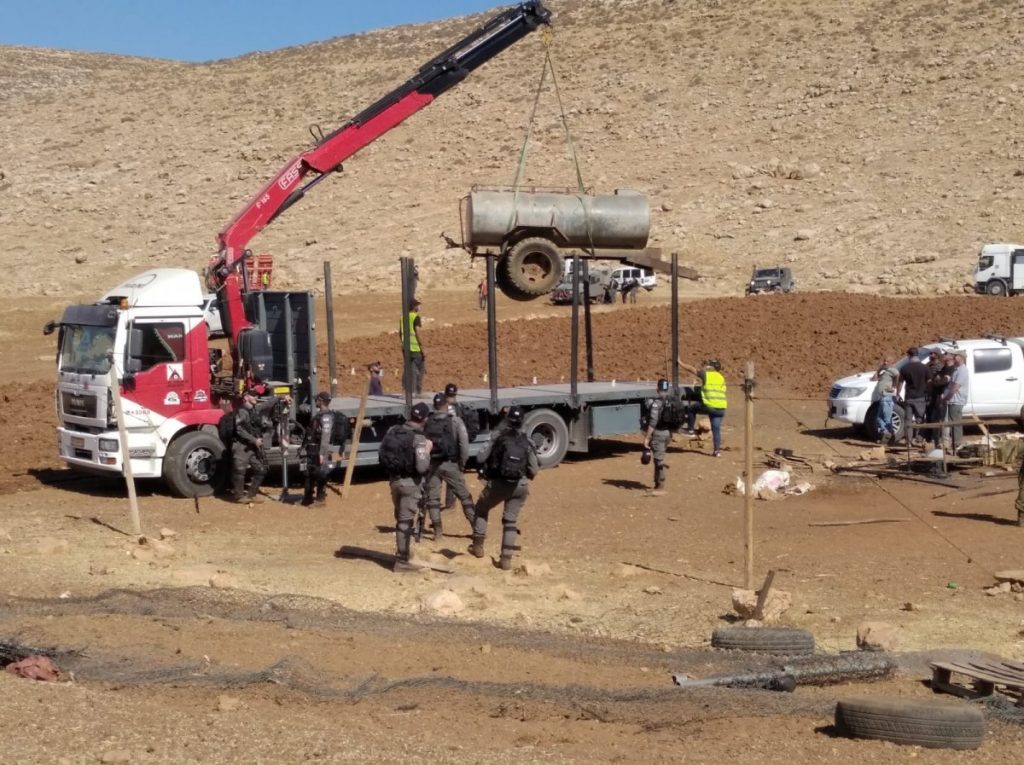 Here’s what Ahmad al-Rashidat, the mukhtar of Ras at-Tin, said to us today:

“They told us we were safe, and then they came and took everything away. The water tanks. A tractor. Solar panels. Our only power source. Our stocks of food. Several carts and wagons. All that we have. Have you ever heard of a government denying water to people? It’s inhuman, a crime. Who could imagine such a thing? Some of the young men protested and were injured, and the soldiers prevented them from being taken to hospital. They tried to do a body search on one young man, and he wouldn’t let them, so they beat him up and held him in detention for four hours.

“We are living on private Palestinian lands; we have an agreement with the landowners in the village of Malik. We are peaceful people. See the school over there. We built it for our children. Now they are afraid whenever they hear a car coming. Tomorrow is our holiday, Id al-Adha, a time of celebration. Every year the children ask for presents, they ask us for whatever they want. You know what they asked for this year? Water. And what do we want? Only a little water, and our dignity, nothing more.

“We don’t understand it. Not all the Jews are bad. There are only a few, maybe only one or two, who are bad. They’re the ones who sent the soldiers here last week.” 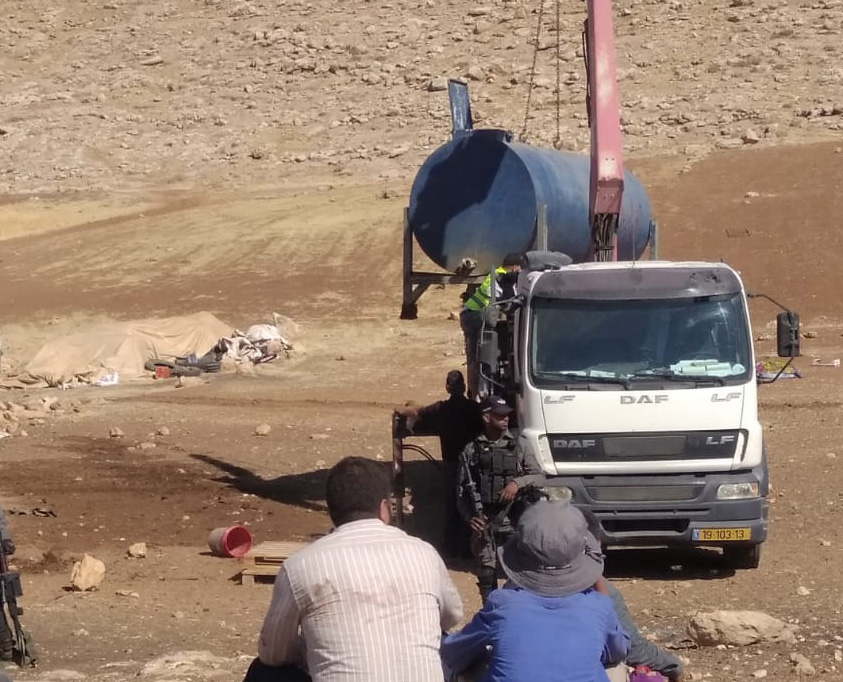 I’m afraid I don’t agree with the mukhtar. There are more than one or two. Some of them very high up. The Civil Administration, which issued the orders, claims, as usual, that it is “only” demolishing illegal buildings – as if it were possible for a Palestinian to build anything at all, legally, in Area C.

Behind the Civil Administration is the fanatical settlers’ organisation called Regavim, which first targeted the school. Of course, the school has a demolition order hanging over it, stayed for the moment by the Supreme Court. But all talk of legality here is no more than a cloud of dust. What we saw today is, in my view, or in my heart, remarkably pure, unmitigated cruelty for the sake of the pleasure that cruelty provides. 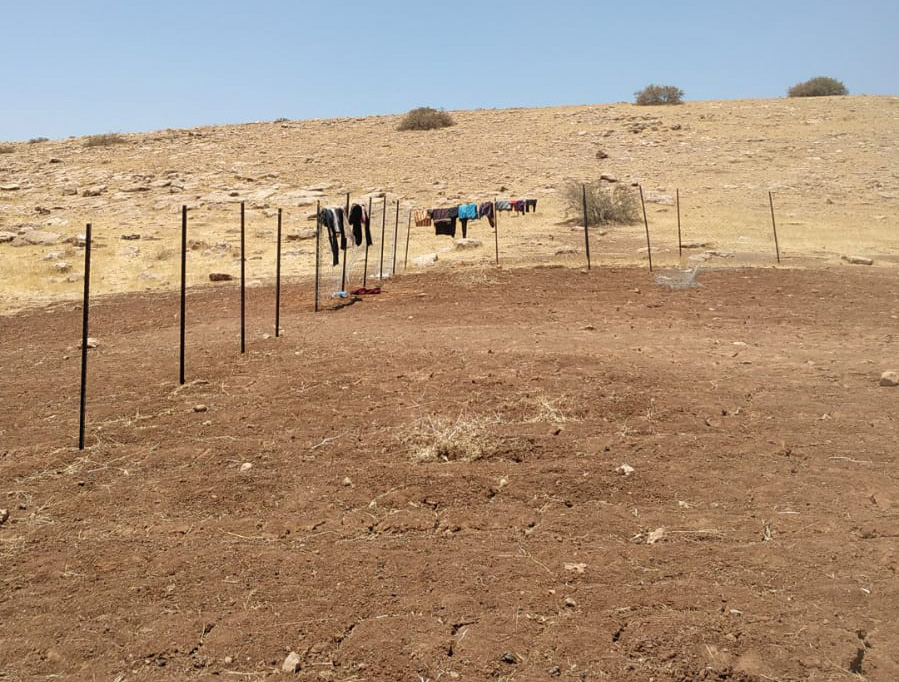 How many times can the army destroy a village? In the case of Humsa: eight.. Photo: David Shulman

Then on to Humsa, which you may remember from earlier reports. How many times can the army destroy a village? In the case of Humsa: eight.

The eighth, a week ago, was terminal. This time, the soldiers took everything, including clothes and children’s toys and mattresses and tents and coffee pots and tools and all the other things people need to live. They loaded all of it onto trucks, drove off, and eventually dumped it at a place called Ein Shibli, some kilometres away from Humsa. It’s not a habitable place for these people for various reasons, including, first and foremost, the presence there of predatory Israeli settlers. But in this case, the army has a pretext. We’ve written about it before. Humsa is officially in a firing zone used for army exercises. In the past, the army would give advance notice to the shepherds, and they would shift to a site called Humsa Foqa for a few days, until the exercises were finished. It wasn’t fun, the timing was often terrible, but they could live, more or less, with these forced evacuations, ikhla. Not anymore. There’s nothing left of Humsa except heaps of ruins and a small enclave just outside the firing zone where 85 people in deep despair are still hanging on. Nowhere to go.

But keep in mind that 46% of the land in the Jordan Valley is classed as closed military zones, including 11 firing zones. The army has plenty of room for its exercises. And why did they establish these zones on privately owned Palestinian land? And why is 85% of the land in the Valley off limits to Palestinians?

As it happens, a former colonel, now Brigadier General, Einav Shalev, gave forthright answers to these questions in an appearance before the Foreign Affairs and Defense Committee of the Knesset in 2014. He was asked about Palestinian “illegal” building in Area C, and he said: “Wherever we have reduced our training exercises [in the Jordan Valley], wild grasses (yabaliyot) have sprung up.” Guess who he means by wild grasses. Even worse: “When you confiscate ten big, white, expensive tents, it’s not easy [for them] to recover.” [The translation is from Amira Hass’s Hebrew report; the English version is here].

Like at Humsa and Ras at-Tin. One wouldn’t want them to recover; that’s the whole point. The plan, on the table at that same committee meeting, was, and probably still is, to forcibly remove these people and concentrate them in permanent sites outside Area C, which Israel wants to annex. Shalev reportedly noted that because of the confiscation policy, the Red Cross decided to stop providing tents to shepherd communities whose huts and barns were destroyed by the Civil Administration. We should be grateful that the then colonel spoke the truth: confiscations, demolitions, training exercises are useful mechanisms of expulsion, in one form or another. 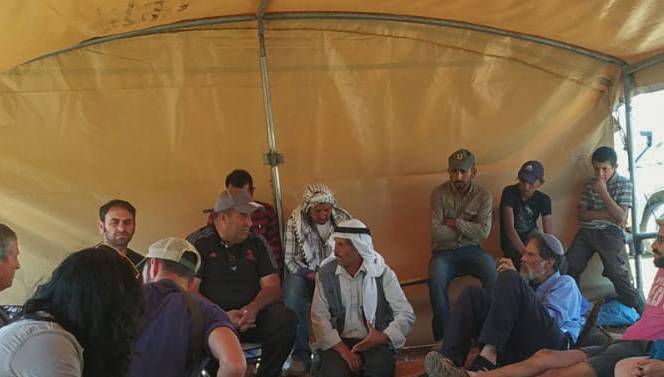 Today is the ninth of the Hebrew month of Av, the day the Jews have, for centuries, mourned the catastrophes they have supposedly suffered on this same day – the destruction of both first and second temples, the end of the Bar Kochba revolt against the Romans, the expulsion from England in 1290 and from Spain in 1492, and a few others. It’s a long list and, for many, our most prized possession.

Now, the tables are turned. Every Tish’a Be’Av Arik Ascherman brings a group to sites of destruction, sites like Ras at-Tin and Humsa and Taybeh, also places scheduled for imminent destruction, like Sheikh Jarrah in east Jerusalem. I joined him today with our son and grandson. At each site, after a Palestinian speaker has described what has happened, we recite a chapter of the Book of Lamentations in the haunting melody that is traditional on the ninth of Av.

“How lonely sits the city of many people, now widowed; once great among nations, a princess, now enslaved…. For the Lord has destroyed without pity (haras velo chamal)…”

But it’s no longer He but we, Israeli Jews, who are pitiless, and it is our own selves that we destroy.

This article was originally published on Touching Photographs. Read it here.