Phillipines: President Duterte’s Pardon to US Marine Pemberton Is a Mockery of Justice

The pardoning of Joseph Scott Pemberton, who was convicted of killing transwoman Jennifer Laude in 2014, is a hard slap on the LGBTQ+ community and a blatant affront to national sovereignty. The pardoning of US Marine Joseph Scott Pemberton is a hard slap on the LGBTQ+ community and a blatant affront to national sovereignty.

Pemberton, who was convicted for the killing of transwoman Jennifer Laude in 2014, is now free to go home.

Bagong Alyansang Makabayan (Bayan) Renato Reyes Jr. questioned the basis of such a move. “Why preempt the court process? Why is the president in a rush to pardon the killer of Filipino transwoman Jennifer Laude?” Reyes said.

Prior to Duterte’s granting of absolute pardon, the Olongapo court has given Pemberton full Good Conduct Time Allowance (GCTA) credits on September 3. The court had ordered his release, four years into his 10-year sentence. The Laude family filed a motion contesting the Olongapo court’s order.

Foreign affairs secretary Teddyboy Locsin who broke the news on Twitter said, “Cutting matters short over what constitutes time served, and since where he was detained was not in the prisoner’s control—and to do justice—the president has granted an absolute pardon to Pemberton.”

By granting absolute pardon, Duterte has erased the punishment for Pemberton.

Reyes described the granting of absolute pardon as “a betrayal of national interest and a great injustice to the Laude family.”

For human rights alliance Karapatan, the move is “a despicable and shameless mockery of justice and servility to US imperialist interests.”

Cristina Palabay, Karapatan secretary general in a statement, said that by granting absolute pardon to Pemberton, “Duterte is mocking the Filipino people, who, through decades, have been violated by US military intervention in the country — with the cold-blooded killing of Jennifer Laude as the latest of such reported crimes.”

“While human rights defenders, activists, government critics and ordinary folks are being arrested and jailed for all sorts fabricated and flimsy charges, while elderly and sickly prisoners continue to be denied humanitarian release amid a deadly pandemic, Duterte has granted absolute pardon to a transphobic murderer, who has not shown an iota of remorse for his brutal crime,” Palabay added. 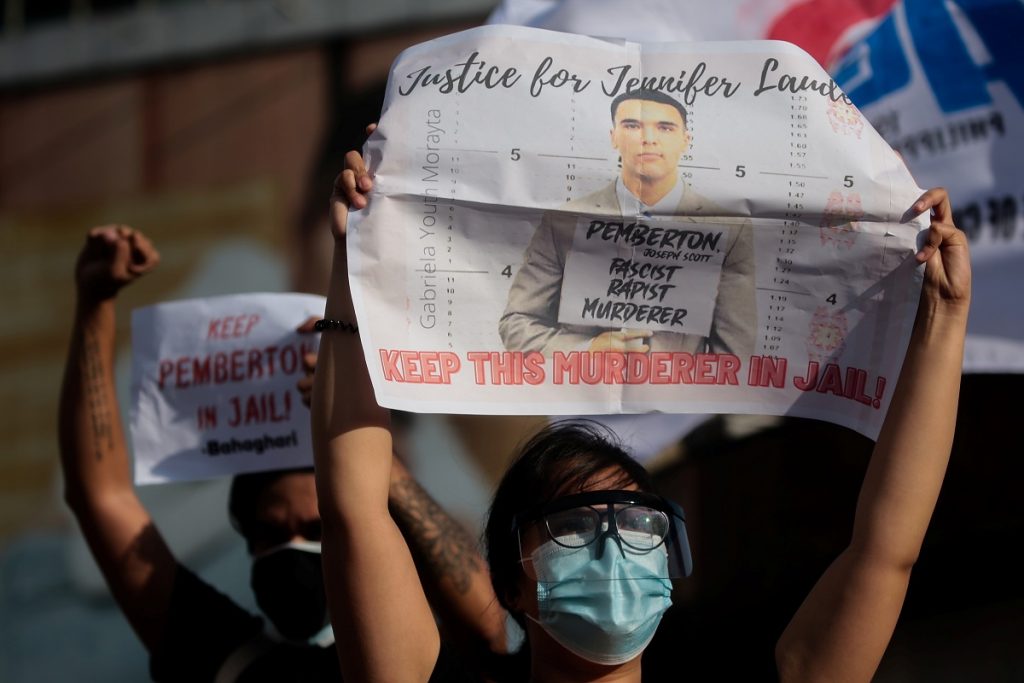 “What makes it even more atrocious is that his entitlements and liberty were apparently politically bartered through an onerous and servile military agreement. What cheap price sovereignty and national dignity,” Olalia said.

Reyes said Duterte has restored the Visiting Forces Agreement (VFA) “to please the Americans.” “He has gone even further by pardoning Pemberton who was the subject of special treatment under the VFA. So much for claims of having an independent foreign policy. The US government had its way again,” Reyes said.

Joms Salvador, Gabriela secretary general, said that the granting of absolute pardon is “fueling further injustice to the Filipino people whose sovereign rights have been violated by lopsided agreements like the Mutual Defense Treaty and the Visiting Forces Agreement.”

She said that such agreements practically grant American soldiers a license to commit crimes against the Filipino people.

Meanwhile, Palabay said “placing the interests of the US government above the Filipino people’s demands for justice and accountability by pardoning Pemberton: this is a hard slap on the LGBTQ+ community and a blatant affront to our national sovereignty.”

Karapatan asserts that Pemberton should remain in jail. They also called for the junking of VFA as well as other lopsided agreements with the US.