Peru's President, Vizcarra, was impeached due to corruption allegations. The interim President to take his place, Merino, was also forced to resign after less than a week in office. 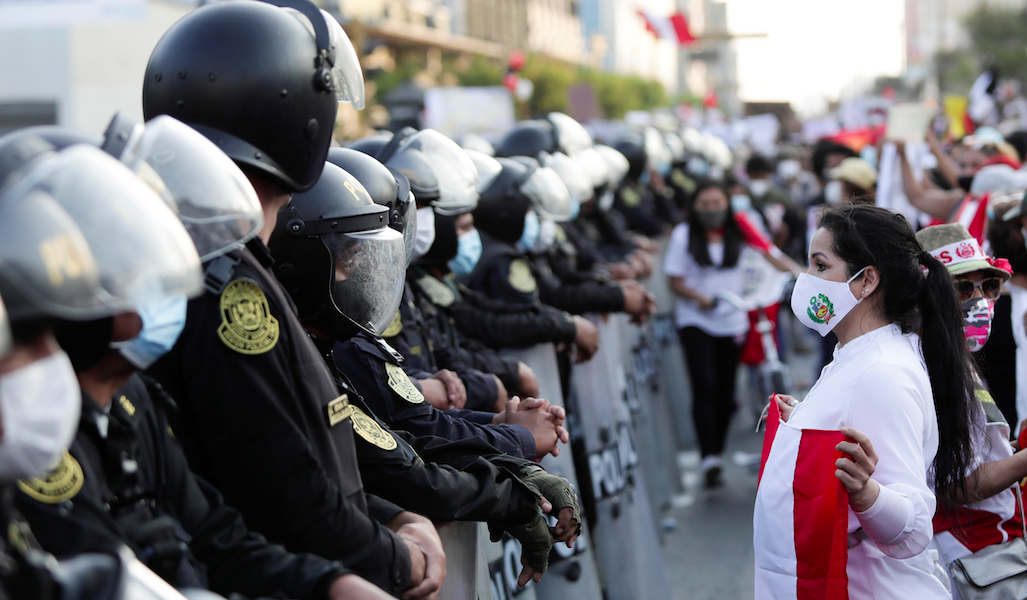 A woman holds a national flag while standing in front of police outside Congress after Peru's interim President Manuel Merino announced his resignation, in Lima, Peru November 15, 2020. Photo: Reuters/Angela Ponce

Lima: Peru‘s interim president, Manuel Merino, resigned on Sunday after less than a week in office, leaving the country in limbo. Merino resigned following lawmakers’ demands he step down over two deaths during protests at the sudden ouster of his predecessor.

The latest political shake-up comes as Peru, the world’s No. 2 copper producer, battles the coronavirus pandemic and what is expected to be its worst economic contraction in a century.

People poured into the streets to celebrate Merino’s departure, waving flags, chanting and banging pots, although the news plunges Peru deeper into uncertainty and legal disarray as lawmakers now wrestle over who will take his place.

Congress is expected to hold a second vote in the evening after the first vote failed to garner majority support for leftist lawmaker and human rights defender ,Rocio Silva-Santisteban, to be designated interim president.

A tense calm prevailed in the capital, Lima, as Peruvians awaited a decision on who would be the next president.

“Merino has resigned because his hands are stained with blood, with the blood of our children,” said Clarisa Gomez, one of those who turned out to celebrate Merino’s departure, while adding that the lawmakers who put him in power should also pay.

The opposition-dominated Congress voted last Monday to remove Merino´s predecessor Martin Vizcarra as president, over bribery accusations which he denies. Lawmakers met on Sunday afternoon to determine the next president, or at least, how one might be chosen.

In a televised speech, Merino, the former head of Congress who had led the push to impeach Vizcarra, asked his cabinet to stay on to help in the transition. He called his resignation “irrevocable” and urged peace and unity. Just minutes before the announcement, Congress president Luis Valdez said all political parties had agreed Merino should resign. If he declined, Valdez said, lawmakers would launch impeachment proceedings.

Thousands in Peru had staged some of the largest protests in decades, most of them peaceful but increasingly marred by clashes, since the vote to remove Vizcarra. A tense week collapsed into chaos late on Saturday, after mostly peaceful demonstrations grew more intense by nightfall.

Vizcarra, whose ouster sparked the crisis, warned Peruvians not to let lawmakers once again determine who would become Peru‘s next leader. “Should those who took these unconstitutional measures be the ones who bring us a solution?” he asked reporters outside his home after Merino’s resignation on Sunday.

Instead, he wanted Peru‘s Constitutional Court to weigh in immediately on whether his own impeachment had been legal. Soon after, the court said it would move to Monday a hearing set for Wednesday to fast track arguments in the case.

“I am here to collaborate,” said Vizcarra, a politically unaffiliated centrist popular with Peruvians, who is yet to be found guilty of the corruption charges that led to his removal.

On Saturday, hundreds of  protesters, most being young, unveiled a massive Peruvian flag and sang the national anthem in Lima’s central Plaza San Martín. However, the sprawling coastal city soon resounded with sirens, shouts and chants for Merino’s removal as rallies and the police response grew increasingly violent.

Peru‘s ombudsman warned on Twitter that security forces had begun “misusing force and throwing tear gas without justification” against those gathered in the city’s center. The agency has demanded an investigation.

“The march is not for Vizcarra to return, it is strictly against Merino,” said César Anchante, a graduate of the city’s university who marched in a rally. “We are tired of corruption, of the usual politicians who divide and impose their personal interests.” he said.

Also on Saturday, Merino’s prime minister told reporters that Vizcarra’s removal had been legal, defending it as a “constitutional change.” Merino too had urged calm and promised to hold presidential elections already set for April 11.