More than 80 people have been killed and 110,000 displaced in rain-related incidents since December, most of them this month. 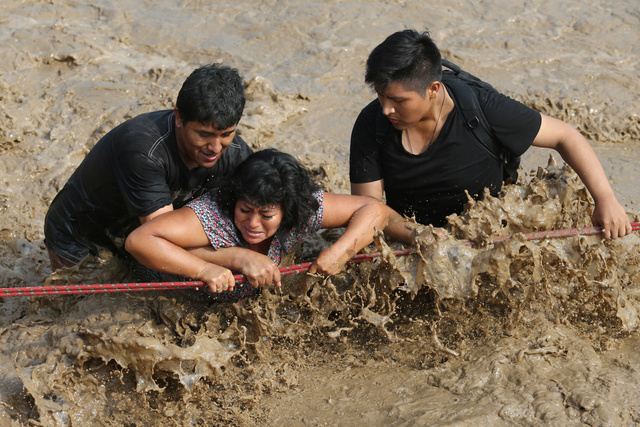 People cross a flooded street after a massive landslide and flood in the Huachipa district of Lima, Peru March 17, 2017. Credit: Reuters

Carapongo: Between rows of plastic tents on the outskirts of Lima, Martha Llanos takes her ration of rice and chicken alongside thousands of others who have been forced from their homes by the worst flooding to hit Peru in decades.

The 43-year-old mother of three said she was less worried about the loss of her makeshift home in the destitute district of Carapongo than she was about her children’s health.

“My two-year-old daughter tells me: ‘Mommy, my stomach hurts,'” Llanos said from the tent city authorities set up for the displaced. “I don’t have any medicine.” 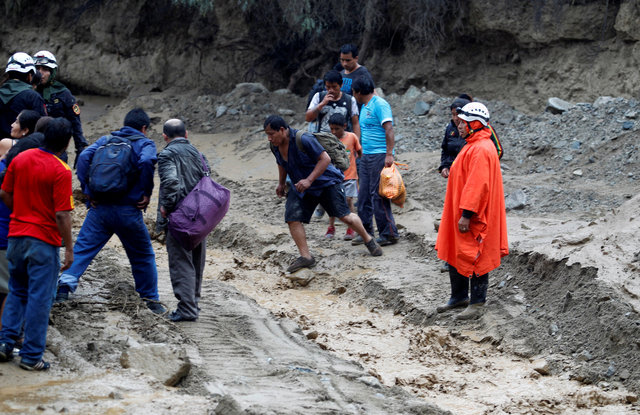 Residents try to cross a mudslide near the central highway after the Rimac river overflowed in Huarochiri, Lima, Peru, March 23, 2017. Credit: Reuters

The spectre of diseases thriving amid pools of stagnant water in flooded neighbourhoods is one of a raft of problems Peru faces as it waits for an end to an unusually brutal rainy season.

More than 80 people have been killed and 110,000 displaced in rain-related incidents since December, most of them this month after a sudden warming of Pacific waters off Peru‘s coast unleashed torrential downpours in a damaging local El Nino phenomenon.

In parts of Peru, including the capital, Lima, where a third of Peruvians live, school classes have been suspended and running water restricted after treatment plants were clogged with debris from mudslides. Vehicles wait on the central highway after a mudslide in Huarochiri, Lima, Peru, March 23, 2017. Credit: Reuters

An un-estimated amount in damages to infrastructure has choked off transit and produced food shortages in some markets.

Poor Peruvians who have built their homes on affordable land near rivers and ravines have been the hardest hit.

“I used to have my business here, but the river swept it away,” said Veronica Ventura, a 33-year-old single mother as she dug through the mud to find the bottles of soda she once sold from her house. 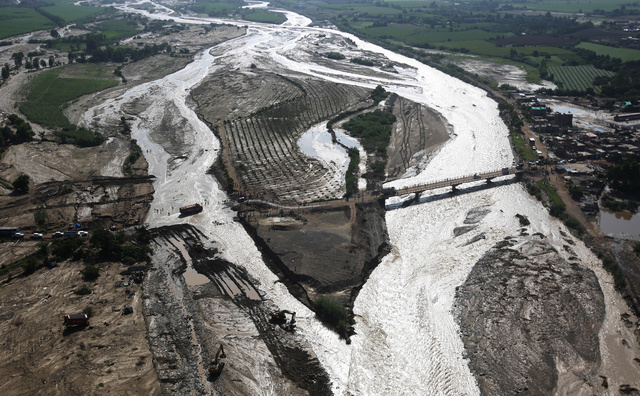 Aerial view of a collapsed road after a massive landslide and flood in Trujillo, northern Peru. Credit: Reuters

As rains continue to lash Peru‘s northern desert region and part of the central Andes, authorities warn flooding may last into April.

The government has fumigated more than 200,000 homes to prevent outbreaks of mosquito-transmitted diseases such as dengue, zika or chikungunya.

In Carapongo, cement columns and parts of brick walls steeped in mud are some of the only remnants of homes that once bordered the Rimac river before it burst its banks last week.

Victor Chuco, a 60-year-old taxi driver, said he and his family had to break through the corrugated iron roof of the house he built two decades ago to avoid drowning in it.

“It caught us by surprise,” Chuco said. “I’ve lost everything, but at least I’m alive.”