The Taliban are playing the Khalilzad entourage like a fiddle – and in his zeal to make a swift exit from Afghanistan, he seems happy to let them do it. About two weeks ago, over 40 Afghans, including newborn babies, were killed in two separate attacks on a maternity hospital in Kabul and a funeral in the eastern Nangarhar province. While in the aftermath of the latter attack, there were the usual calls for blood donations, in the case of the former, the appeals also went out for maternal milk as dozens of neonates had been deprived of their first feeds in this world. An Afghan psychiatrist, Firooza Omar, who was nursing her own baby at home, rushed to feed the orphaned babies at her own bosom.

The funeral attack was claimed by the Islamic State of Iraq and Syria–Khorasan (ISIS-K) – ostensibly an affiliate of the Daesh or ISIL – but no one came forward to claim the heinous assault on the mothers and children at the Médecins Sans Frontières (MSF) hospital. The Taliban rejected any role and have condemned the MSF hospital attack, while US special envoy for Afghanistan Zalmay Khalilzad was quick to accept their rejection and pinned the blame on ISIS-K.

Afghan vice president Amrullah Saleh, however, rebuffed the US envoy, without naming him, and laid the blame squarely at the Taliban’s doorstep, saying, “their current or former allies or their ideological twins attacked a maternity hospital & a funeral procession killing mothers, newborn babies & innocent civilians.”

Also read: Explained: Is the US-Taliban Accord Already Doomed?

Unlike the US government, which is taking extraordinary pains to accept every Taliban claim at face value these days, the Afghan officials maintain that the ISIS-K is a either a subsidiary of the Pakistan-Taliban combine, a hotchpotch of the Afghan and Pakistani Taliban dropouts, or another one of Pakistan’s jihadist terror projects.

The Afghans also maintain that the attacks like the one on the MSF maternity hospital bear the signature of the Taliban’s Haqqani Network (HQN) wing. The HQN has a long history of serving as the link between the Taliban and the international jihadists a la al-Qaeda.

Afghan National Security Advisor Dr. Hamdullah Mohib stated the Taliban sponsors – a thinly-veiled reference to Pakistan – are now subcontracting violence to other entities. While it is out of character for ISIS or the ISIS-K to not claim an attack it has conducted, it has remained the Taliban and the HQN’s sly tactic to not take ownership of the attacks in which large numbers of Afghan civilians have been killed. And it is also not like the Taliban has never attacked a public event or has had high regard for a hospital. The Taliban killed 39 people in an attack near a hospital last fall, in the southern Zabul province.

The Taliban has not relented in its violence against the Afghan state and citizens since the so-called peace deal it signed with the US. Just two days after the hospital and funeral attacks, the Taliban claimed responsibility for killing 5 people – all civilians – in an attack on a military court in the eastern city of Gardez.

Still, US envoy Khalilzad keeps giving Taliban a clean bill of health and insists that they are keeping their end of the bargain. Khalilzad has also been all praise for the chief Taliban-backer, Pakistan, for its role in Afghan peace and regional stability.

Well, the man is either lying to himself, the US administration, the world, or all of the above. I have noted before that the whole Khalilzad process “seems to be a replica of Richard Nixon’s so-called decent interval, which actually led to an indecently humiliating withdrawal from Vietnam”. Now add to it the types of half-truths, lies and concealing of information by the US officials from the public at the time and it really is a déjà vu.

A just-released report by the US Department of Defense (DoD/Pentagon) citing the US Defense Intelligence Agency (DIA) states:

“The DIA reported to the DoD OIG [Office of Inspector General] that Pakistan has encouraged the Afghan Taliban to participate in peace talks, but refrained from applying coercive pressure that would seriously threaten its relationship with the Afghan Taliban to dissuade the group from conducting further violence. The DIA also told the DoD OIG that Pakistan continues to harbor the Taliban and associated militant groups in Pakistan, such as the Haqqani Network, which maintains the ability to conduct attacks against Afghan interests.”

The report notes that while the HQN is supporting the Taliban-US dialogue to the end of getting the foreign forces out of Afghanistan, it “likely will continue participating in military operations against the Afghan government to support the Taliban’s “fight-and- talk” strategy moving into intra-Afghan negotiations.

According to the DIA, the Taliban almost certainly sees maintaining a viable military campaign as being critical to securing leverage for advancing its goal of reestablishing a government grounded in Islamic law in Afghanistan”. And, equally important is the report’s observation that despite Sirajuddin Haqqani underplaying, in his infamous New York Times op-ed, the Taliban’s links to and presence of al-Qaeda in Afghanistan, “according to the Federal Bureau of Investigation, Haqqani “maintains close ties to al Qaeda”.

Importantly, this Pentagon report historically has a classified appendix, which is absent this time due to the COVID-19 pandemic. Who knows what might have been in that appendix had it been there. But another report by the Special Inspector General for Afghanistan Reconstruction (SIGAR), which came out last month has quite damning verbiage about the attempts to put lipstick on the Taliban pig.

The SIGAR report notes that the US-Taliban agreement was followed by a week-long reduction in violence by all sides. But right after that the Taliban increased the attacks against the Afghan targets. The report highlights a deeply disconcerting development that the “NATO Resolute Support (RS) restricted from public release data on the number of enemy-initiated attacks (EIA) that took place this quarter for the first time since SIGAR began using it in 2018 to track the levels and locations of violence”.

Mullah Abdul Ghani Baradar, the leader of the Taliban delegation, signs an agreement with Zalmay Khalilzad, US envoy for peace in Afghanistan, at a signing ceremony between members of Afghanistan’s Taliban and the US in Doha, Qatar February 29, 2020. Photo: Reuters/Ibraheem al Omari

Taking Zalmay Khalilzad’s public pronouncements in favour of the Taliban, his scapegoating of the ISIS-K for all violence, and his praise for Pakistan, which are at odds with the US intelligence reports as well as the ground realities and the Afghan government’s position, it seems like the special envoy is duping the US public and administration into believing that both Taliban and its chief patron Pakistan have changed their stripes.

One has no reason to question his motives, but one certainly has to take issue with the Grand Canyon-sized chasm between what he is telling publicly and the story that emerges from these reports and the daily massacre of the Afghans. 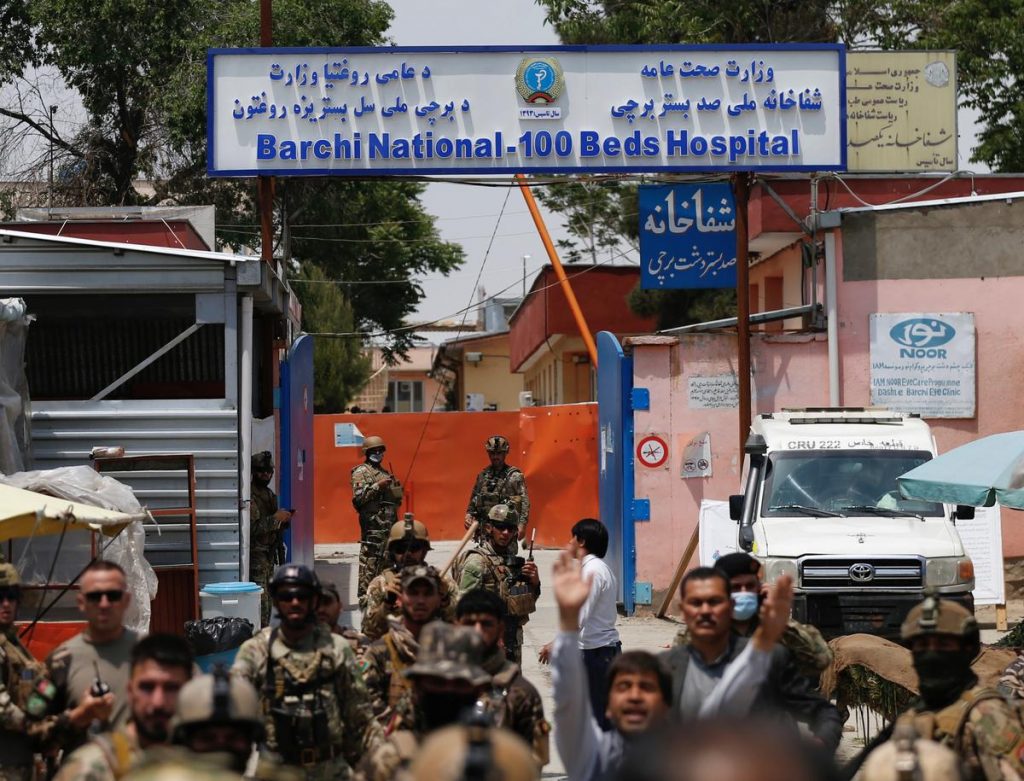 There is little doubt that the Khalilzad process is not just flawed, but rotten and moth-eaten. It has done zilch to stop Pakistan from harbouring Taliban and HQN terrorist leadership who rain death on Afghans every day. In fact, he has emboldened Pakistan that it can get away with its jihadist terror project without even a rap on the knuckles.

Taliban, HQN and al-Qaeda terrorists have lived and died — of natural causes and assassinated– sired children and got medical care in Pakistan. No wonder that credible Afghan journalists are reporting that Sirajuddin Haqqani was recently diagnosed with COVID-19 at a Combined Military Hospital (CMH) in Pakistan, probably in Rawalpindi.

The Khalilzad deal not only disregards the plight of the Afghans but also the sacrifice, in blood and toil, of the US men and women in uniform, as well as over a trillion dollars in the US taxpayers’ money.

Khalilzad’s plan may allow President Donald Trump to get his mission accomplished moment in an election year, but is likely to leave a bloody mess behind. The Taliban are playing the Khalilzad entourage like a fiddle – and in his zeal to make a swift exit from Afghanistan, he seems happy to let them do it.

The Pakistan-Taliban plan is simple: maintain the Taliban and HQN sanctuaries inside Pakistan, continue the talk-fight-talk process but target Afghans not the US, build the Taliban’s diplomatic profile, and let the US exit or reduce its military footprint drastically.

The Pakistan-Taliban combine is not interested in talking to the Afghan government but is biding its time. It is baying for blood once the US is out of Afghanistan. This the exact same page from the playbook Pakistan – then a US ally – deployed against the Soviet presence in Afghanistan.

While the USSR was crumbling at the time and was unable to financially and militarily support the Afghan government, the US is no imminent economic danger despite the current recession. This unholy haste to exit and the shady deals that Khalilzad is cutting to that end, on behalf of the US government, have to be stymied by a robust diplomatic process by the Afghans. Khalilzad may be extricating the US from Afghanistan but he is tying the Afghans and the Afghan state in a US-Taliban deal over which they had no control, but one that was inked in their blood.

The post-election bickering in Kabul lasted way too long but now that there is a semblance of a unity government after the agreement between Dr. Ashraf Ghani and Dr. Abdullah Abdullah, the Afghan leadership has its work cut out for it. They have to act, and fast, to mitigate the damage already done.

The Taliban declaring a three-day ceasefire for the Muslim holiday of Eid-ul-Fitr and Dr. Ashraf Ghani reciprocating it along with a pledge to release 2,000 Taliban prisoners is a movement in the right direction but changes little on the ground. The Afghan government has not just the right but a responsibility to verify every US-Taliban agreement before putting its trust in it. After all, they, and not the US, have to live with it.